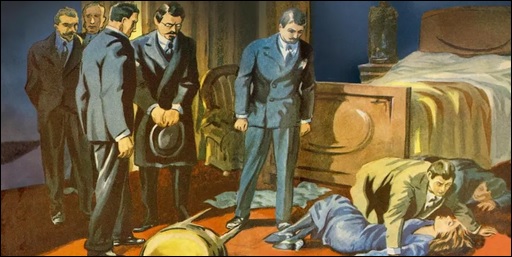 "Locked rooms... I'll tell you what it is, Humbleby: you've been reading too much fiction; you've got locked rooms on the brain."

Years ago, I compiled two lists, "My Favorite Locked Room Mysteries I: The Novels" and "My Favorite Locked Room Mysteries II: Short Stories," which desperately needed updating and that fact didn't go unnoticed as some of you kept banging on about it – to quote one recent comment, "another year and you haven't added anything." Shaming apparently works as it began to hang around me like a noose and decided to completely redo both lists, but this list is different from the previous two.

Firstly, I merged both lists into one and forgone the brief plot descriptions, because the list is bloated enough as it is. Secondly, I split the list into different categories divided by periods and specialized sub-genres (historical, juvenile and non-English) with the novels and short stories listed under "Curiosities & Oddities" not representing the best or personal favorites of mine, but still have something of interest to offer to the dedicated locked room enthusiast. Thirdly, this list was compiled based on my old, often shoddily written reviews and Watsonian memory dictated by my personal taste that has all the maturity of a 12-year-old John Dickson Carr. Lastly, the prolific impossible crime and short story writers, who have a lot of missing stories on the list, really need a separate list of their own. Same goes for all the brilliant and wonderful locked room trickery that can be found in the Japanese anime-and manga detective series, but don't feel qualified to compile such a list as my experience with them has been very narrow in scope. Needless to say, the Detective Conan (a.k.a. Case Closed) episodes "The Cursed Mask Laughs Coldly" and "The Case of the Seance's Double Locked" can be counted among the best the impossible crime genre has to offer.

So the list is undoubtedly incomplete and likely overlooked a few stories, but this mammoth-sized update should keep you bloodhounds off my back until at least 2027. Enjoy!

"The Flaming Phantom" (1905) by Jacques Futrelle

"The Invisible Bullet" (1914) by Max Rittenberg

About the Murder of the Circus Queen (1932) by Anthony Abbot

Murder Among the Angells (1932) by Roger Scarlett

The Murder of Sigurd Sharon (1933) by Harriette Ashbrook

The Unicorn Murders (1935) by Carter Dickson

The Whistling Hangman (1937) by Baynard Kendrick

The Judas Window (1938) by Carter Dickson

The Listening House (1938) by Mabel Seeley

And Then There Were None (1939) by Agatha Christie

The Reader is Warned (1939) by Carter Dickson

The Case of the Solid Key (1941) by Anthony Boucher

The Frightened Stiff (1942) by Kelley Roos

The Hangman's Handyman (1942) by Hake Talbot

Murder and the Married Virgin (1944) by Brett Halliday

The Three Tiers of Fantasy (1948) by Norman Berrow

Death of Jezebel (1948) by Christianna Brand

The Footprints of Satan (1950) by Norman Berrow

The Longstreet Legacy (1951) by Douglas Ashe

The Case of the Little Green Men (1951) by Mack Reynolds

The Danger Within (1952) by Anthony Gilbert

"The Strange Case of Steinkelwintz" (1929) by MacKinlay Kantor

"About the Disappearance of Agatha King" (1932) by Anthony Abbot

"The Border-Line Case" (1937) by Margery Allingham

"The Room With Something Wrong" (1938) by Cornell Woolrich

"The Problem of the Emperor's Mushrooms" (1945) by James Yaffe

THE MODERNS (AFTER THE FIFTIES):

Murder Most Ingenious (1962) by Kip Chase

The Hand of Mary Constable (1964) by Paul Gallico

Death After Evensong (1969) by Douglas Clark

The Gold Deadline (1984) by Herbert Resnicow

The Dead Room (1987) by Herbert Resnicow

The Burglar Who Traded Ted Williams (1994) by Lawrence Block

"The Man Who Read John Dickson Carr" (1965) by William Brittain

"The Impossible Murder of Dr. Satanus" (1965) by William Krohn

"The Scientist and the Wife Killer" (1966) by Arthur Porges

"Odds Bodkins and the Locked Room Caper" (1969) by Richard Curtis

"Captain Leopold and the Impossible Murder" (1976) by Edward D. Hoch

"Scenes from the Country of the Blind" (1977) by John Sladek

"The Christmas Bear" (1990) by Herbert Resnicow

"The Burglar Who Smelled Smoke"  (1997) by Lawrence Block & Lynn Block

Naname yashiki no hanzai (Murder in the Crooked House, 1982) by Soji Shimada

Ikeru shikabane no shi (Death of the Living Death, 1989) by Yamaguchi Masaya

Seijo no kyusai (Salvation of a Saint, 2008) by Keigo Higashino

Shijinso no satsujin (Death Among the Undead, 2017) by Masahiro Imamura

"The Monster of the Lighthouse" (1935) by Keikichi Osaka

"Hakkyō-suru jūyaku" ("The Executive Who Lost His Mind," 1984) by Soji Shimada

“Midori no tobira wa kiken” ("The Lure of the Green Door," 1991) by Rintaro Norizuki

"De dichter die zichzelf oplsoot" ("The Poet Who Locked Himself In," 2017) by Anne van Doorn

The Mystery of the Disappearing Cat (1944) by Enid Blyton

The Clue of the Phantom Car (1953) by Bruce Campbell

The Mystery of the Whispering Mummy (1965) by Robert Arthur

The Mystery of the Shrinking House (1972) by William Arden

"The Thief of Claygate Farm" (1947) by John Russell Fearn

They Walk in Darkness (1947) by Gerald Verner

She Died Without Light (1956) by Nieves Mathews

Koromu no satsujin (Murder in the Red Chamber, 2004) by Taku Ashibe

The Statue of Three Lies (2011) by David Cargill

"The Grosvenor Square Mystery" (1909) by Anonymous

"The Case of His Headless Highness" (1973) by Ellery Queen

Still not enough? You want more locked room lists? I have a list with "My Five Favorite Impossible Crime Stories from Case Closed, vol. 1-69" and back in 2017 I compiled a now outdated list with all the known Dutch-language locked room novels and short stories. I also put together two lists of lost media, "A Selection of Lost Detective Stories" and "A Return to the Phantom Library," which sadly has a lot of locked room mysteries that went unpublished and were eventually lost to history.
Geplaatst door TomCat on 4/07/2022