The General Goes Too Far (1936) by Lewis George Robinson

Lewis G. Robinson had a long, distinguished service career as a Medical Officer in the British Army, serving during the First World War and rising to the rank of Colonel before retiring due to ill-health, who drew on his army experience to write four specialized, military-themed detective novels – all but one published under the name "George Limnelius." Under the same pseudonym, Robinson wrote three extremely obscure short stories, "The Time-Gun" (1929), "A Perfect Alibi" (1929) and "On the Ether" (1930), which were published in The Royal Magazine. Unfortunately, I have not been able to find anything about the short stories, except for titles and publication dates. 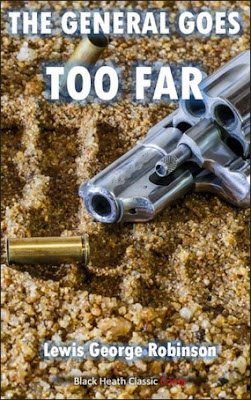 The Medbury Fort Murder (1929) is his best remembered novel, championed by Robert Adey as an unfairly forgotten locked room mystery, who helped secure the book a spot in Martin Edwards' The Story of Classic Crime in 100 Books (2017). A place earned not only for its "insider's picture of the army" and "authentic flavour of military life," but for its "no-nonsense treatment of sex and violence" that's "hardly in keeping with the lazily conventional view of Golden Age fiction as cosy." I reviewed the book in 2019 and thought the story's true merit lies in its inversion of the inverted mystery. Somewhat reminiscent of 1930s Anthony Berkeley. The Medbury Fort Murder is definitely a cut above your average, 1920s detective novel and a portent of things to come in the decades ahead, but the other novels had been out-of-print for decades in 2019.

Last year, Nick Fuller listed Lewis Robinson in a blog-post, "Detective stories to reprint," going over some very obscure authors who "might well merit reprinting," but, unbeknownst to Nick, Robinson had already sneaked back into circulation by stealth! Black Heath reissued his four standalone mysteries, as cheap ebooks, in June, 2021. This gave me an excuse opportunity to dive into the neglected work of another forgotten mystery writer. ...Tell No Tales (1931) and The Manuscript Murder (1933) have already neared the snow-capped tops of the big pile. Since I'm chronologically challenged, I wanted to begin with his final novel.

The General Goes Too Far (1936) in many ways resembles The Medbury Fort Murder as both succeeded in simultaneously being inverted mysteries and genuine whodunits, but The General Goes Too Far is richer in characters, storytelling and setting – which begins in 1920s Ireland and concludes years later in a West African colony. But it starts out as a messy tangle of characters and incidents, until the third and fourth chapter. This is the gist of it. Major-General Sir John Sangye is "a natural-born Puritan" with a personality forming "a pattern of all the less amiable virtues" (an ambitious teetotaler and non-smoker), but, twenty years ago, he had a secretive relation with a young stage actress, Nellie Johnson. She became pregnant with his child, but married Sangye's rich, middle-aged cousin, Captain Challoner, who accepted the child as his own. However, Captain Challoner has no intention to father his cousin's "bastards" and this comes to a head when their car breaks down in the middle of the Irish countryside. A local Shinner commando ambushes the stranded car and a firefight ensues, which Sangye uses as a cover to shoot and kill Challoner. Sangye married his widow and accepted his own daughter, Belinda, as his stepdaughter. So "he erased the memory of that cold-blooded murder from his conscious mind," but "old sins cast long shadows" and it would come back to haunt him. This is only the prologue!

The next chapter introduces another set of cousins, Major Anthony Carson and Major Reginald Heverell, who have a fabulous wealthy aunt. Aunt Edna is in her eighties, sickly and a lot to leave one or both of her nephews. Major Carson begins to play with the idea "to expedite, as it were, the slow processes of Nature" by tampering with Aunt Edna's life saving amyl drops. Simply replacing the nitrate of amyl in one of the capsules with a drop of water. And he would be on his next six-month tour abroad when she gets to the harmless capsule during a fit. Finally, the third chapter introduces a young lieutenant, Benjamin Daunt, who's Belinda's fiancé and learns from his uncle, Colonel Daunt, the truth about Belinda's parentage. But he's indiscreet with this information. And that has consequences when they all come together in a remote African outpost of the British Empire. 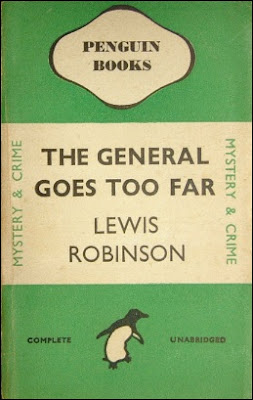 A remote, lonely outpost situated between the boundaries of French Gambia and the British Protectorate of Nuevas Palmas, Liberia, where a handful of outpost station were strung along the seven hundred miles of frontier – of which Makompe was the remotest outpost. An island fortress, "built on the site of a seventeenth century Portuguese fort," which constitutes the only fixed defenses of the port of Libreville. So the island fort comes under the responsibilities of the War Office and completely independent of the Colonial Office. It really irks His Excellency, the Governor, knowing that there is one spot, "only about a square mile in all," in the Colony where his writ does not run. Any crime, civil or military, done on the island would be tried by Court Martial. So there's "plenty of scope for friction." The characters who gathered there have already gotten themselves in trouble or plotting how to get themselves out of it as the past slowly comes back into focus. When someone gets shot in a restricted area of the fortress, Major-General Sir John Sangye refuses to waive his "technical right" to jurisdiction and let the Colonial Office investigate the case. And, if worst came to worst, the Governor could get the Home Government to intervene, which would look very bad, but the General stubbornly continues with "dangerous policy." What follows is a Court of Inquiry (in lieu of an inquest), a quick arrest and the suspect getting court martialed, which makes for a very unusual take on the courtroom drama.

Yes, The General Goes Too Far is all over the place as it tries to be an inverted mystery with a detective pull. A frankly written, character-driven crime novel with the General having to face the consequences of his past crime, while trying to come up with "some cunning move to deflect the impending blow at his daughter's happiness." A military courtroom drama with a last-minute, locked room murder placing another character in the docks and simply a story of military life in the Colonies. But it was not an entirely unsuccessful juggling act. You need to get through the messy, tangled opening chapters to get a good idea who's who, what they want, or do, and why. That makes what unfolds at the fort appear all the more mystifying. You have no idea in which direction the story is going or where its going to end.

Robinson managed to keep this up until the trial began, but during and after the trial it became easy to see where the story was headed and the solution began to take shape. Admittedly, the detective story elements were timeworn and second-rate. Such as the late locked room murder, which served as another dead giveaway. But, by that time, it hardly detracted from the overall quality of the story.

The General Goes Too Far is an engrossing, well-constructed and fascinatingly told inverted detective novel enhanced by its unvarnished depiction of a far-flung, Colonial outpost of the British Empire – replete with class-and race distinctions as well as the tensions between civil and military administrators. This helped balance out some of the shortcomings revealed during its second-half. So the end result may still be a second-string mystery novel, but a first-class second-stringer with a less than conventional take on the inverted detective story. And, perhaps, in some way a little ahead of its time. But I think readers today can appreciate an obscure vintage with a slightly modern twist.