The Case of the Counterfeit Colonel (1952) by Christopher Bush

Christopher Bush has been described as one "the most reliable and resourceful" mystery novelists of his day, who made his name in the 1930s as a craftsman of elaborate and magnificently baroque detective novels, but the turmoil of the Second World War took the series in a different direction – starting with The Case of the Murdered Major (1941). The first title in Bush's wartime trilogy that began the transformation of Ludovic Travers from an unofficial affiliate of Scotland Yard to licensed, but genteel, private investigator. A change that was influenced by the American hardboiled school of Raymond Chandler and Dashiell Hammett, which reached its zenith in the early fifties with such novels as The Case of the Corner Cottage (1951) and The Case of the Fourth Detective (1951). 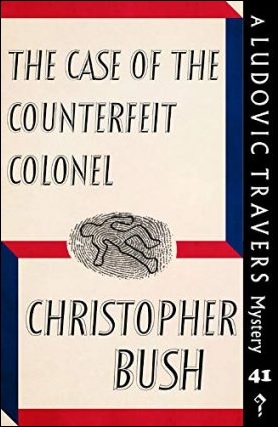 I noted in my review of The Case of the Flowery Corpse (1956) that then 70-year-old Bush was probably feeling a little nostalgic when he wrote the book, because the plot reminded me J.J. Connington, Freeman Wills Crofts and R. Austin Freeman. Early writers of the Realist School. A school Bush has always been associated with on account of his expertise in taking apart seemingly unbreakable alibis and whose early practitioners he must have read as a young man. So it's not unlikely Bush returned in his old age to the type of detective stories he read and enjoyed in the 1910s and 1920s.

That's the impression The Case of the Flowery Corpse left on me and The Case of the Counterfeit Colonel (1952) strengthens that observation with a typically Croftian alibi, false identities and a (hidden) criminal scheme, but no idea if this is actually a third phase in the series – or simply brief, nostalgic nods to a bygone era. Either way, the results were very satisfying.

The Case of the Counterfeit Colonel is the forty-first entry in the series and begins with Ludovic Travers, chairman and owner of the Broad Street Detective Agency, personally accepting a routine assignment.

Henry Clandon is a publisher who served at a place called Larentza, in Sicily, where "an unsuccessful night attack" had left him "in no-man's-land with a lump of shrapnel in his belly." A young officer from another regiment, David Seeway, had brought him in and had later come to see him in hospital, but only for a few minutes with sister nervously fluttering around the bed. Clandon never got to properly express his gratitude and now feels "damnably ungrateful" to the young soldier, which is why he wants the agency to find Seeway, but he only has a general description of the man – an infantryman in his mid-twenties who probably came from a place called Bassingford. A quiet little town about twenty-five miles north of London. A second clue is that Seeway made a reference to a man named Archie Dibben.

Travers believes there's something "remarkably peculiar" about the case and decides to make the opening moves himself, but all he has to work with are two names and a location. Soon he learns that Archie Dibben is a two-bit comedy actor who used to be part of a touring company that spent one week, in 1939, in Bassingford to perform Under My Thumb. So why would Seeway reference an obsure actor at the bedside of the wounded Clandon? What exactly happened during that week that made them completely disappear from the map?

The Case of the Counterfeit Colonel is a tightly knotted affair, but the complexity is not derived from an overly elaborate plot, but the way in which the problems are presented. The story begins with a simple request to find a person and the only clues are a couple of names, but every piece of information that's unearthed also brings more questions to light.

So the plot becomes more complex as the story progresses and it's not until the twisted, dimly-lit path of the past brings Travers to a small house, where he finds the body of the titular “colonel,” that the problem begins to assume a definitive shape – which brings one of my favorite policemen to the scene, Chief Superintendent George Wharton. Wharton has lost some of his luster here ("looking a bit tired" and "his huge shoulders were more hunched than usual"), but it was good to see him again working alongside Travers. I really missed Wharton in The Case of the Flying Donkey (1939) and The Case of the Flowery Corpse.

The murders provides more physical clues to get a handle on the case, such as two faded photographs and a mysterious fingerprints, which Travers and Wharton use to meticulously reduce the number of suspects. And by the end of the story, there are only two of them left. There is, however, a complication that demonstrated why Bush was a craftsman: one of these suspects fabricated an alibi, while the after had left an incriminating fingerprint at the scene of the murder. So who killed the colonel and how does that explain either the alibi or fingerprint of the other suspect? How is it possible that there a mystery readers who don't like Bush?

All in all, The Case of the Counterfeit Colonel is a gratifying detective novel with a deceivingly uncomplicated front, but the clever writing and story structure spins a great deal of complexity around, what really is, a simple and uncomplicated plot. This allowed Bush to get more out of the situation than what originally was in it. I don't think you give a mystery writer a bigger compliment. Another great reprint from Dean Street Press.
Geplaatst door TomCat on 8/10/2020