Roman McDougald was a little-known, now long-forgotten, American detective novelist, who's usually grouped with the hardboiled writers, but his private investigator, Philip Cabot, is "a clever, sophisticated man about town" – whose "cases always seem to involve locked rooms, impossible crimes and the like." Philip Cabot's page, on Thrilling Detective, states that the dusting of "slightly hardboiled prose" can't disguise that McDougald's novels were "more traditional and genteel than most private eye stuff of their era." 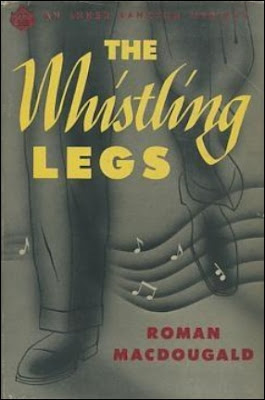 A comparison is drawn with S.S. van Dine's Philo Vance and John Dickson Carr, but having now read two of his novels, The Whistling Legs (1945) and The Blushing Monkey (1953), I can say McDougald was one of the odd ducklings in the Van Dine-Queen School. A group of writers whose novels share some features of the Van Dine traditional without exactly fitting in. Such as Anthony Abbot, Harriette Ashbrook, Kelley Roos and Roger Scarlett.

The Whistling Legs is set in the home of a member of New York City's upper crust and the plot has ties to the impossible crime story, in which the movements of suspects around the house is crucial to the puzzles. Cabot is not only friendly terms with the authorities in charge, but is married to the sister of the District Attorney, Jefferson Boynton. Where the series differs is that Cabot is not some genius amateur sleuth, to whom detective work is nothing more than an intellectual exercise, but a normal, commonsense private investigator and The Whistling Legs has this weird, almost misplaced, lighthearted and satirical tone – reminiscent of Roos and the Lockridges. McDougald also included a rival detective who's both an amusing and exasperating parody of Sherlock Holmes and Philo Vance.

The Whistling Legs begins on the day Cabot married his secretary, Deb, who's the sister of the D.A. and they have ten days to spend together before he has to leave New York in the uniform of a Captain of Artillery. And on their first evening together, Cabot receives a phone call from someone who sounded "crazy in a very casual manner."

Darryl Rand is the manufacturer of a new kind of explosive, called Magnamite, which creates "a sort of artificial earthquake" that offers "tremendous possibilities in warfare" and landed him a contract with the War Department. But the story he has to tell is even weirder. Rand is convinced that somebody in his home will be murdered and fears that the police investigation will establish "a reasonably strong suspicion" that he committed the murder, which the members of his household will support with testimonies that he had been overworked due to his wartime responsibilities. And that he had simply buckled under great nervous strain. A theory that will be confirmed when they find his body besides a suicide note that he had admitted to have written, but he wanted Cabot to come along to give him all the details. Somehow, he decides to go. 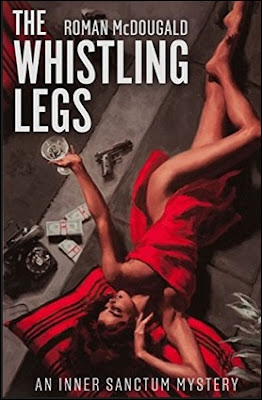 The dwelling on Riverside Drive houses some of the usual, and some unusual, characters who could potentially fit the role of murderer or victim.

Gail is Darryl's beautiful wife and he's devoted to her, but this puts him at odds with her more intelligent sister, Miss Jan Utley, who lives with them and she doesn't like Darryl – which is entirely mutual. Greg Rand is Darryl's second-cousin who he had treated like he was a son, but Greg only has kind words for Gail. A more unusual character is a young, twenty-some man, "Deb," who had been run over and now has lost his memory. Darryl had witnessed the accident and rushed him to the hospital. And he has good reasons to believe the amnesiac has a link to one of the people living under his roof. Cabot quickly discovers there's an undercover private investigator among the staff members, but the best character of the lot is his rival detective, Carlo Pugh.

Carlo Pugh is the brother of Darryl's first wife and an analytical chemist, who came into the company when it was organized, but, more importantly, he's "America's Number One Mystery Novel Fan." The walls of his room are lined with "the brilliantly colored jackets of mystery novels," hundreds of them, which also doubles as forensic laboratory. There's a table with a large microscope, test tubed and a photographer's darkroom. Pugh has been carrying out an investigation long before Cabot arrived on the scene and has already discovered the murderer, but he missed one essential thing to make his case complete. A corpse!

Throughout the story, Pugh talks in the pompous, self-aggrandizing tone of Philo Vance, while trying to come across like Sherlock Holmes, which should have made him an intrusive joke on an otherwise moody and serious detective story. Pugh does crawl around the corpse with a tape measure before saying that he would "not state categorically that the killer was an ape," but that it was definitely someone, or something, with "apelike characteristics." But some of his detective work actually got results that helped Cabot putting all the pieces together. So you're never sure whether he's sincere or playing a deep game. 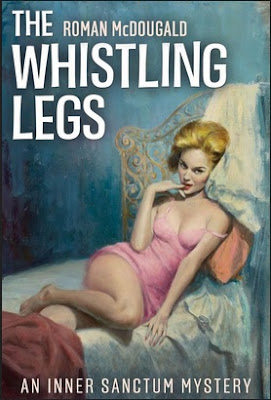 Purely seen as a rival detective, Carlo Pugh is a precursor of Simon Brimmer from the 1975 Ellery Queen TV-series.

Anyway, Cabot took precautions to prevent a murderer from striking at the obvious candidates and, if it happened, it would be "one of those sealed room things," but the murderer did strike and left behind a body – as well as his client in a drug-induced stupor. However, the plot becomes a bit tricky to discuss in detail, because a lot involves the movements of the various characters, but the storytelling never sacked. And the numerous impossibilities, and quasi-impossibilities, were put to good use to keep the story moving.

The first murder is not, strictly speaking, a locked room mystery, but it shows the murderer's peculiar ability to appear inside room that were thought to be either unoccupied or locked. Only the family cat, Cotton, has the ability to sense the murderer entering a room before appearing. This is always accompanied by "an unprecedentedly strange sound." A sort of whispering or whistling sound in the darkness. So the murderer has the unnerving presence of a dark, tangible shadow who can only be glimpsed from the corner of your eye. You can sort of see the comparison with Carr.

A second and third impossibility are introduced quite late into the story. Someone manages to get to third floor when the upper floors were under close police surveillance and the fingerprints of an innocent person on a bloodstained knife that the police laboratory determined to have been "physically impossible" to "have been made by anyone except the last person who grasped the handle." Sadly, none of the solutions showed any ingenuity, or imagination, but they were put to good use to advance the overarching plot and kept the story rolling – although the reason why Cabot had to be knocked unconscious was a clever piece of the puzzle. Something else that stood out is that the second murder was not merely treated as getting rid of annoying witness to pad out the story, but the elusive shadow coldly murdering this person was genuinely depressing and made the first murder even more tragic in light of the solution. Very well done!

So, while not an unsung (locked room) classic, The Whistling Legs stands as an engrossing, slightly unconventional detective novel in which McDougald expertly turned a relatively simple, uncomplicated plot into a maze-like structure. A maze with filled with frightened cats, solid shadows, rival detectives and impossible crimes. More than once, it managed to confuse and throw me off the trail, but there are worst places to get lost in. Warmly recommended to fans of the American Golden Age detective story.

Good news! The Whistling Legs is available as an inexpensive ebook from Phocion Publishing.
Geplaatst door TomCat on 8/22/2020