"Sometimes we have to stand on our heads in order to see things the right-side up."
- Hadji Singh (The Real Adventures of Jonny Quest, Episode 12: The Alchemist)

The Alchemy Murder Case is the third, four-part episode from Kindaichi Shounen no Jikenbo R (The File of Young Kindaichi R) I watched and has a by-the-numbers plot, written according to the well-worn formula of the series, but with a completely original locked room trick and a clever method for hiding the murder weapon – a gigantic long-sword. A minor piece of the overall puzzle that can be viewed as a well done, quasi-impossible problem. But first things first. 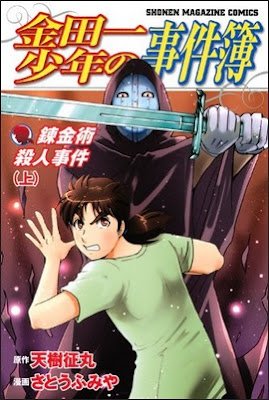 Hajime Kindaichi takes a shot at winning a 400 million yen prize by participating in a reality game show about a hidden treasure, which consists of a stack of gold bullion secreted somewhere on a lonely island.

Renkin Island is completely isolated from the outside world and used to belong to a physicist, Ezaki Kuroudo, who became an alchemist and constructed a bizarre, intricate building on the cliff-side of the island. Alchemist Mansion was built for "the sake of the ultimate scientific research," alchemy, but disappeared when he had reputedly reached "the peak of that alchemical research." What he left behind was the mystery of what happened to the ton of gold he had brought to the island with him. After all, it had to be somewhere.

A television special is being filmed around the hidden treasure and several people are brought together by the production team to hunt for it, which includes a number of celebrities such as Akashiba Taiki (comedian), Fukamori Hotaru (idol) and Hayami Reika (actress) – who's a recurring character in the series and debuted in Death TV. However, they also netted several regular contestants "who won a puzzle-solving battle" in order to secure their spot on the show. They are Isshiki Rikako (science student), Kamioka Fuuma (dental student) and Hajime Kindaichi.

So the cast, alongside the crew, are left on the island, but, before the day draws to a close, the problems begin.

The only motor-launch is torched and footage from the overnight camera shows a cloaked figure, with an iron mask, dragging "a huge sword" across the hallway! A situation culminating with the discovery that the body of the Assistent Director, Mayumura Takuya, is peering down at them from atop of the rooftop skylight, but the sword-wielding Alchemist has only just began and ramps up the bloodshed in the subsequent episode – proving he has both the look and work ethic of a deranged killer from a 1980s slasher film.

Hell, one of the victims sat on the toilet when the Alchemist removed a panel in the ceiling and struck her down from above! If that doesn't qualify as slasher-type of murder, I don't know what does.

Anyway, the most interesting of the murder is the one the Alchemist committed inside a sealed bedroom. All of the bedrooms in the Alchemy Mansion have impassable, grated windows and doors of solid steel that can be latched on the inside with a heavy bar, but, as the legend goes, "an alchemist can walk through any kind of metal," which is what the viewer is shown. Admittedly, I was annoyed that they showed too much of the murderer's handiwork, because it appeared to give the whole game away.

A fear that seemed to be confirmed when, what I saw, suddenly reminded me that The Alchemy Murder Case had previously been brought up on this blog. Back in 2015, I reviewed a horrendously bad locked room novel and imagined an alternative explanation for the impossible crimes, which earned a comparison in the comment-section with this Kindaichi story.

So my attention began to wane and, once again, feared I had to write a lukewarm review of the story, but the truly original explanation reeled me back in. The solution added a new method to the long list of tricks of how a murderer could enter, and exit, a room that appears to be completely impenetrable and fitted the theme of the plot like a glove. And no. The metallic bar, securing the door from the inside, was not lifted and lowered with the help of a magnet. It's a bit more involved than that.

What's really remarkable about the locked room trick is how the same principle applied to the disappearance of the sword. A sword that had been looked for all over the place, but could not be found. One of the later murders provides a solid clue as to what happened to the weapon and this, in turn, should provide you with a clue to the problem of the latched door.

So, the impossible aspect of the plot really makes this four-part episode recommendable to other locked room afficianodes and in particular to those who have a special fondness for Paul Halter's Le cercle invisible (The Invisible Circle, 1996) – which shares a couple of similarities with The Alchemy Murder Case. Such as a sword murder inside a sealed room with grated windows and the additional problem of a vanishing sword.

The remaining parts of the episode were decent enough, but also pretty standard fare for this series. Once again, we get one of the myriad of variations on the same motive that (for some reason) this series recycles endlessly. I can only remember one of the earliest volumes in the manga series, namely Smoke and Mirrors, in which the murderer had a novel motive. Otherwise, it's always some kind of reworking of the age-old avenger-motif.

However, that will always be an annoyance with me, but a minor one and to most readers motive is only of secondary importance. It's just weird that nobody in the Kindaichi universe ever commits murder simply for financial gain, love, jealousy, shame or fear.

As a whole, The Alchemy Murder Case was a pretty decent, if formulaic, entry in the series, but one with an outstanding and original locked room mystery. So I suppose this episode can also be used as an introduction to the series for some of my readers. You can watch them (legally, don't worry) on Crunchyroll.

I previously reviewed The Blood Pool Hall Murder and The Prison Prep School Murder Case. No idea which episode will be next on my watch list, but The Death March of Young Kindaichi and The Rosenkreuz Mansion Murders look promising. So stay tuned!
Geplaatst door TomCat on 6/11/2017