Last week, there was a sudden avalanche of reviews of the work of one of the greatest mystery writers who ever lived, John Dickson Carr, who mastered the art of crafting seemingly impossible crimes and was one of the pioneers of the historical detective story – which is an often overlooked achievement of his. 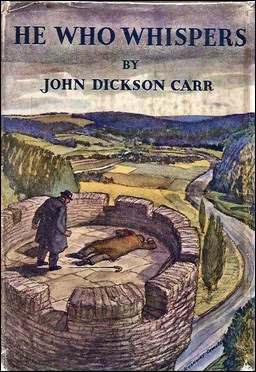 The titles under examination were It Walks by Night (1930), The Plague Court Murders (1934), The Unicorn Murders (1935), The Burning Court (1937), The Emperor's Snuff-Box (1942) and The Gilded Man (1942). A nice little sampling from Carr's early-and mid period, which were his Golden Years, but the sample was not entirely representative of this period, because none of my fellow reviewers had picked a Dr. Gideon Fell novel to discuss. So this gave me the excuse needed to ignore my semi-sentient TBR-pile and return to a fan-favorite from the Dr. Fell series.

He Who Whispers (1946) is considered by many fans as one of Carr's masterpieces and some even think the book is superior to the other monumental title from the same series, The Hollow Man (1935), which earned its reputation as a classic for its expert handling of a complex, overly ingenious plot – preventing the ending from becoming a cluttered, tangled mess. You can say that the book, while being somewhat artificial, is the fantastic done right.

But what readers seem to admire about He Who Whispers is the delightful simplicity of the well-clued plot and the tense, but understated, atmosphere of the story. And the human element at the heart of the book that turned a sordid, slap-dash crime into "a miracle in spite of itself" and ruined a second cleverly planned, near perfect murder. So the book is a treat for fans of the Golden Age (locked room) mysteries, but I'm getting ahead of myself again.

He Who Whispers begins when the London-based Murder Club reconvenes for the first time since the outbreak of World War II. However, the first peace-time gathering of the club can hardly be described as a success, because only three people turn up and two of them aren't even members.

One of the two guests is a distinguished historian, Miles Hammond, who received an invitation to attend from Dr. Fell and the second guest is a woman, Barbara Morell, who notices that the whole club has, sort of, disappeared – all except for the scheduled speaker of the evening. Professor Rigaud of French Literature was supposed to talk about the Brooke case, in which he was personally involved, but now has to tell his remarkable story to an audience of two. But what a story!

The professor's story takes place in 1939, in the small French town of Chartres, where the largest leather manufacturing company was owned by an Englishman, Mr. Howard Brooke, who lived a quiet, harmonious family life with his wife and son, Harry. A peaceful life that was uprooted when his secretary, alarmed by the looming war, returned to England and her replacement, Fay Seton, irrevocably changed their lives. Harry becomes infatuated with Fay and convinces her to marry him, but the engagement is followed by a malicious whisper campaign and a string of anonymous letters addressed to her future father-in-law. As a consequence, the locals have thrown stones at her, convinced that she's a "drainer of bodies" and "killer of souls," but Mr. Brooke has come to see her as an immoral woman and is determined to buy her off – which ends with his inexplicable death at the top of an old ruined tower. 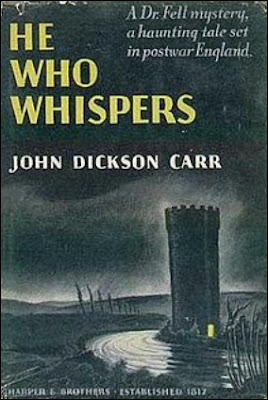 Mr. Brooke asked Fay to meet him at the top of Henri Quatre's tower, standing on the bank of a river, which has been reduced by time and conflicts to a crumbling, "stone shell" with a staircase leading to a flat roof. There was a family picnicking on the grounds below, who swear nobody else climbed the tower, while the unobserved, river-side part of the structure is forty feet high. And as "smooth as a wet fish." Only someone with the power of levitation could have approached Mr. Brooke, stabbed him with his own sword-stick, vanish again without being seen by the people on the ground. So the local police, unable to come up with an alternative explanation, shelved the case as a suicide.

However, that's not the end of Fay Seton's tragic story. On the day following the professor's curious tale at the Murder Club, she turns up on Hammond's doorstep as the trained librarian he had requested to help him catalog his late uncle's extensive book collection. Admittedly, this coincidence is the only aspect of the story that feels strained and unnatural, but Carr tried to make this plot-shift look as plausible as possible. Once you get pass this point, the story becomes it old brilliant self again.

So there you have the double-pronged problem facing Dr. Fell: a seemingly impossible stabbing on top of crumbling castle tower in pre-war France and an attempted murder in the present by trying to scare someone to death. Only link between the two cases is the presence of Fay Seton.

Dr. Fell's unraveling of all of these plot-threads demonstrates why his creator was the undisputed master of the impossible crime story, but one of the two things that really impressed me this (second) time around were the crisp clues – which helped me fill in the details about the explanation time had obliterated from my memory. I simply marveled at how Carr was capable of hiding the rather obvious murderer and at the same time dangle this person in front of your eyes.

The other part that impressed me was the simplistic, but depressingly human, truth that lay behind the murder of Mr. Brooke in France. There are no gimmicks or cheap, shop-worn magic tricks, but a combination of all the good and bad aspects one finds in humanity. And in this particular case, it resulted in a seemingly impossible murder. Once Dr. Fell reconstructed everything that occurred on the top of that ruined tower, you feel like you just returned from a funeral.

The depressing ending doesn't do much to lighten the dark, tragic mood, but not every story needs a happy ending and this is one of them.

In summation, He Who Whispers can be considered as one of Carr's half dozen, or so, masterpieces, which has everything from a well-worked out solution, splendid clueing and superb characterization to actual tension and a grim, foreboding atmosphere – that was, at times, beautifully understated. One of the best titles from the post-WWII years of the Golden Age.
Geplaatst door TomCat on 6/30/2017