"Whenever bizarre phenomena occur that seem to defy human understanding, there are very few who can actually fish out the evil plots lurking behind them. And the longer one waits, the truth grows exponentially distant."
- Lai Shang-rong (Ashibe Taku's Murder in the Red Chamber, 2004)

Recently, two of my fellow bloggers, Kate and "JJ," wrote tepid reviews of Robert van Gulik's The Chinese Maze Murders (1956) and The Willow Pattern (1965), which tempted me back to my beloved Judge Dee series to provide a counterweight to their blog-posts, but the last remaining title on my TBR-pile is Murder in Canton (1966) – generally considered to be one of the poorer entries in the series. So I decided to backtrack over previously traversed ground and return to one of my favorite titles from the series. 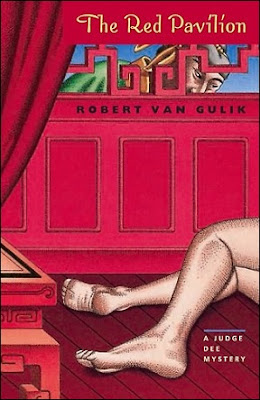 The Red Pavilion (1961) begins with Judge Dee, accompanied by Ma Joong, breaking their homeward journey from the capital at the Sin City of 7th century China, Paradise Island. A town with gambling halls, wine shops and brothels on every street corner.

Personally, Judge Dee does not approve of what goes on Paradise Island, but realizes such resorts are "a necessary evil" and a good warden, like Feng Dai, ensures that it is "a controlled evil." So, much to Ma Joong's delight, they decide to overnight at the pleasure resort. There are, however, a rapidly mounting pile of problems and unforeseen circumstances forcing them to extend their stay at Paradise Island – which begins with the difficulty of finding a place to spend the night.

Upon their arrival, Paradise Island is in the middle of celebrating the Festival of the Dead, when the souls of the departed mingle with the living, but the consequence of these festivities is that lodgings are scarce. The Hostel of Eternal Bliss does have one unoccupied room, called the Red Pavilion, which has been the scene for a string of violent and inexplicable deaths. Someone took his own life in there only a couple of days ago!

Nevertheless, Judge Dee waves away the objections uttered by the inn keeper and takes possession of the accursed room. A decision that would come back to haunt the magistrate, but he would make another one before the end of the day.

The second lapse of judgment came during a brief encounter with a colleague, Magistrate Lo, whose presence on the island pertained to the tragic suicide of a promising Academician, Lee Lien – recently appointed a member of the Imperial Academy. On his way home, Lee tarried at the island and became infatuated with a woman, but when she turned him down he "cut his jugular vein with his own dagger" behind the locked door of the Red Pavilion. An elaborate key of "intricate pattern" was on the inside of the door and the only window barred with iron bars no more than a span apart. So it had to be suicide, assured Lo, as he asked Dee to stay a day, or two, in order to wind up the affair for him. And then hightails it out of there.

Magistrate Lo had a good reason to leave the pleasure resort in a hurry: a famous courtesan and Queen of Flower of Paradise Island, named Autumn Moon, tried to sink her claws into the magistrate. Judge Dee had already met her, before taking over the investigation, but had given her the cold shoulder and angrily she mentioned that, only three days ago, a scholar killed himself because of her – which is the death Lo had been investigating. But the room would soon claim another victim.

When he returns from dinner, Judge Dee finds that the bedroom door of the Red Pavilion is locked on the inside and a glance through the barred window reveals the form of a naked woman on the floor. The door is battered down and the body is shown that to be of Autumn Moon. She appears to have suffered a heart attack, but the doctor also discovers bruises around her throat. This suggests someone had been throttling her, however, there were "no marks of fingernails." So how was she attacked and how did the murderer entered, and left, the room when the key was on the inside of the door? 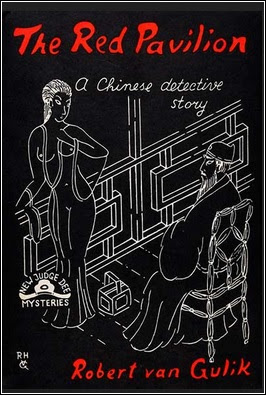 Meanwhile, Ma Joong strikes up an acquaintance with a pair of delightful characters, Crab and Shrimp, who work for the warden of Paradise Island and they refuse to believe the Academician was the type of commit suicide, but, more importantly, they tell about another fishy suicide that took place in the same room over thirty years ago – when the father of the local wine merchant reputedly took his own life in the locked and barred bedroom of the Red Pavilion.

So that's three inexplicable deaths, separated by three decades and three days each, which all had the same locked room as the scene of the tragedies, but Van Gulik provided the story with a different explanation for each case. A very ambitious attempt that has to be appreciated, but two of three impossibilities were a trifle weaker than I remembered.

The past murder is only nominally a locked room and the then magistrate of the district only passed it off as a suicide because a deadly smallpox epidemic was ravaging the region at the time, which will come to play an important part in the two deaths several decades later. So the lack of a proper locked room trick can be forgiven as this supposed suicide and epidemic has far-reaching consequences. On the other hand, the locked room problem surrounding the Academician turned out to be a routine affair (Lo was sort of right there) with one of the oldest and unimaginative tricks in the book.

However, the explanation for the death of Autumn Moon is one of those one-of-a-kind locked room trick tailored to the specific events and setting of the story (e.g. Alan Green's What a Body, 1949).

A trick splendidly using such clues as the victim's poor health, the strange bruises, past epidemics, the supposed suicide from three days previously and the room itself to create an impossible crime that, in itself, function as a clue to the overall solution. But where that overall solution really excels is when all of the plot-strands, including the three locked rooms, are twisted together with the theme of the book showing the consequences when the evil of past events are left unresolved – which revealed the excellent mystery I remembered reading all those years ago.

A second consequence, story-wise, is that the nature of the case does not allow Judge Dee to act as an examining magistrate or detective, but as a correcting factor who lays the restless spirits of the sin-filled pleasure island to rest by covering everything up. Nobody is arrested, sentenced and escorted to the execution grounds. And he has a good reason to sweep everything under the carpet. So the past and its ghosts are finally laid to rest at the end of the Festival of the Dead, which was a nice, stylistic touch to the story.

Overall, The Red Pavilion definitely stood up to re-reading with a solid, well-crafted plot that, when everything came together, strengthened the individual parts that looked a trifle weak on their own – which is the hallmark of a good plotter.