Murder and the Married Virgin (1944) by Brett Halliday

Last time, I reviewed a juvenile detective novel by Enid Blyton, The Mystery of the Disappearing Cat (1944), that confronted the Find-Outers with the apparently impossible theft of the titular, prize-winning Siamese cat and gave me the idea to pick the subject of today's review as my next read – as it's an interesting contrast to Blyton's children's detective fiction. A hardboiled, tough-guy 1944 locked room mystery obviously not intended to be read by 8-12 year old's. "Brett Halliday" was the pseudonym of an American writer, Davis Dresser, who was married to the well-known mystery novelist Helen McCloy and together they ran a literary agency called Halliday and McCloy. They also founded the Torquil Publishing Company, but Halliday is best-known as the creator and first writer of the Michael "Mike" Shayne series. A hardboiled counterpart to Ellery Queen complete with different series-periods (Miami and New Orleans), ghost writers and a short fiction magazine (Mike Shayne Mystery Magazine).

Mike Shayne is seen by knowledgeable, better informed readers as "one of the most popular private detectives ever," whose cases are "generally very well plotted and pleasantly complex," but the earlier books have been called "surprisingly traditional" in nature – something that doesn't really surprise me anymore. The tough-guy private eye school is supposed to be the antithesis to my beloved, plot-driven detective stories of ratiocination, which is not entirely untrue. But my experience is that a lot of them were excellent plotters and either tried their hands at the locked room mystery or even made it a specialty. Just look under the "Private Eyes" tag.

Murder and the Married Virgin (1944) is the tenth novel in the Mike Shayne and Kate, of Cross Examining Crime, picked it as one of her recommendations to locked room enthusiasts based on the reviews in The Anthony Boucher Chronicles: Reviews and Commentary, 1942-47 (2001-09). Anthony Boucher praised the "clever locked-room murder method" and "typical Halliday hard-paced action." So let's see what this series is all about.

Murder and the Married Virgin takes place shortly after Shayne moved from Miami to New Orleans and setup shop in two-room suite, on the fourth floor of the International Building, with a brand new secretary, Lucy Hamilton – who apparently played a role in a previous novel. From what I gathered, Lucy is the Nikki Porter of the series, but with more character consistency. Anyway, Shayne gets two different cases on his desk that conveniently took place under the roof of the same household.

Firstly, a Mr. Teton, of Mutual Indemnity, hires Shayne to recover an emerald necklace that had been insured for $125000, but, in the present gem-market, "the necklace would easily bring two hundred thousand." The necklace, belonging to a Mrs. Lomax, was presumed stolen during a burglary and was supposed to be in the bedroom safe, which the burglar didn't touch. That's why nobody missed the necklace until the day their maid committed suicide in her locked, third-floor bedroom. Katrin Moe was a Norwegian immigrant engaged to be married to a young army lieutenant, Ted Drinkley, who, dazed and broken down, turns to Shayne. He wants to know why she committed suicide the day before their marriage. Or was she perhaps murdered? And how? 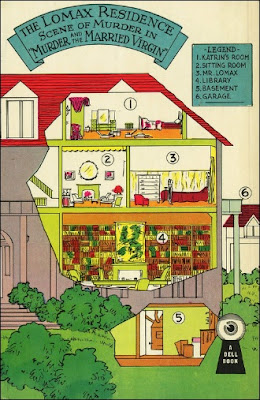 Shayne remarks that "Philo Vance might be able to sort out the truth from the lies, but I'll be damned if I can." However, he does a decent job in tangling with the locked room problem with no less than two false-solutions. Shayne spots the possibility of an old-dodge and pieces together a technical, but not uninspired, false-solution which accounts for both the locked door and why Katrin appeared to welcome death with "outflung arms and a smile." The actual locked room-trick achieves the same effect, but is a bit cruder in execution and not as fairly clued. Regardless, these locked room bits and pieces were, too me, the highlight of the story.

But in every other regard, Murder and the Married Virgin is a seedy, hardboiled private-eye novel and Shayne has to through the whole shebang to tie the stolen necklace to an impossible murder. There's the dysfunctional Lomax family made up of "an old man married to a wife with young ideas" with a stone-cold, perpetual bored daughter, a wannabee playboy son and a chauffeur with movie-star looks – not to mention a dead maid. He also has to tangle with a troublesome dame, a shady club owner and armed torpedoes, which comes with the customary whack to the back of the head and "a murder frame" around his neck.

Shayne has to do a lot of talking, thinking and downright dirty work to get himself out of a very tight spot. Such paying for "witnesses" to place a certain someone at the scene of a murder, which disgusts Lucy to the point where she's ready to walk out on Shayne ("...I thought you were decent"). Funnily enough, I picked Murder and the Married Virgin as a simple contrast to a children's (locked room) mystery novel from the same year, but both stories have their detectives seriously tampering with evidence. One of them was done out of mischievous, child-like innocence, while the other was the result of adult cynicism in a dog-eat-dog world ("scruples are something the boys write about in detective novels"). So incredibly different, and yet, I can't help but see a family resemblance.

My sole complaint is that the ending felt a little like fiddling with a combination lock, trying different combinations with the known numbers, but other than that, it's a solid, fast-paced private eye novel and a notable example of the hardboiled locked room mystery. So the other three Halliday novels on my big pile will be moved up a few places.