The Mystery of the Disappearing Cat (1944) by Enid Blyton

So far, I've grossly neglected the juvenile detective story in 2021 with my review of Bruce Campbell's The Mystery of the Vanishing Mystery (1956) dating back to October, 2020, but a certain someone acted as a constant reminder to return to this largely unexplored nook of the genre – particularly to the surprisingly plot-conscious Enid Blyton. The Rat-a-Tat Mystery (1956) was my previous exposure to Blyton and it was disappointing, but it didn't erase the rigorous plotting, clueing and clever use of red herrings in The Mystery of the Invisible Thief (1950). The Rilloby Fair Mystery (1950) added a new angle to an age-old locked room-trick. Why not return to Blyton with another one of her locked room mysteries that has received some praise from her resident fanboy. 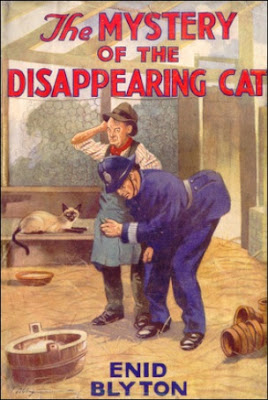 The Mystery of the Disappearing Cat (1944) is the second novel in The Five Find-Outers and Dog series and takes place at the beginning of a long, nine-week summer holiday. A holiday reuniting Fatty, Larry, Daisy, Pip, Bets and Fatty's free spirited dog, Buster, who solved The Mystery of the Burnt Cottage (1943) over the Easter holiday. So they wish there will be another mystery for them to solve during the summer, but everything appears to be quiet and peaceful in the Peterswood.

Only thing of interest that has lately happened is Lady Candling moving into the house next door to Pit and Bets. While their new neighbor doesn't have any children their age, Lady Candling has brought along her prize-winning collection of Siamese cats, who have a cat-house in garden, where they strike up a friendship with the gardener's boy, Luke – a 15-year-old lad who can hardly read or write. Luke is "terribly clever with his hands," carving wooden animals and making twig-whistles, as well as knowing everything about the birds in the countryside. And that's more than enough for the Five Find-Outers! All they have to do is watch out for the head-gardener, "horrid Mr. Tupping," who's one of the vilest creatures to ever wander onto the pages of a children's story. More on that in a moment.

The Five Find-Outers finally get "a real, proper mystery" when the cream of Lady Candling's prize-winning cats, named Dark Queen, disappears from her cage in the cat-house, but the Monkey's Paw is at work as their wish comes at a prize. Dark Queen was stolen between four and five o'clock, which means that only Luke could have stolen the cat. At the time, Luke was working around the cat-house and swore nobody else had been anywhere near it.

Constable Goon is more than willing to go along with Mr. Tuppering to apprehend Luke as the cat-napper, as nobody else could have possibly done it, but The Five Find-Outers believe their new friend "would never, never do a thing like that." So they recklessly plunge themselves headfirst into another rabbit hole with Buster leading the charge.

A notable highlight of their detective efforts is when they investigates the cat-house, ahead of Goon, where they find an incriminating clue and conclude it must have been planted to cast suspicion on Luke. So they nick the evidence, empty their pockets and litter the cage with false-clues like peppermint drops, a shoe lace, a ribbon, a button and cigar stubs – which "surprised and puzzled" Goon to no end. An act so legally questionable that it would make Perry Mason beam with pride at the next generation of detectives. Another thing I thought was really well done is that the disappearance act is repeated a second time, like a script, under practically identical circumstances. Once again, the only person present at the time was Luke. Even the Find-Outers begin to wish "everything wasn't so dreadfully puzzling." 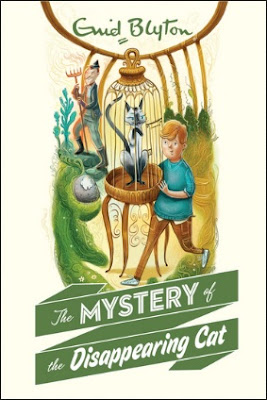 Blyton showed her credentials as a mystery writers by playing a fair hand, although not quite as brilliantly as in The Mystery of the Invisible Thief, but the given clues should give the story's intended audience a shot at putting all the pieces together themselves. However, it won't fool an adult reader for even a minute and a jaded mystery reader can figure out the locked room-trick before it happens. But there was still much to admire about the plot.

Blyton used the locked room trope like an expert as it served two very specific purposes (ROT13): gb tvir gur png-anccre na hafunxnoyr nyvov and unaqvat gur cbyvpr n ernql-znqr fhfcrpg, which Blyton handily jenccrq hc naq cerfragrq nf n ybpxrq ebbz zlfgrel. Something I can appreciate as a snobbery prone connoisseur of puzzle plots and locked room mysteries. While the whole thing is as clear as day to adult readers, it was amusing to see how Blyton misdirected her young readers using adult authority (gur haoernxnoyr nyvov) and the general inexperience of the Find-Outers. Such as not immediately understanding the clue they smelled in the cat-house, but never in a condescending or superior way. Blyton respected both her characters and readers. A fact perhaps better reflected in the dark, realistic undertone of the series.

Firstly, in this story, there's that "rude, bad-tempered old man," Tupping, who regularly abuses Luke verbally and boxes his ears, but he also tore apart Bets strawberry garden in a rage. Bets had been given a few strawberry runners from his garden ("he really thought it was his garden, and not Lady Candling's") and had to get even with an 8-year-old girl. Luke also lives in constant fear that his abusive stepfather will belt him "black and blue," if he finds out he's suspect or loses his job. Something else that's always hovering in the background is the parental neglect of Frederick "Fatty" Trotteville as Larry remarks in passing to him "Your mother and father don't bother about you much, do they?" as "you seem to go home or go out just whenever you like," which is very different from the household of the brother and sister of the group, Pip and Bets – whose parents have a bed-time bell to let them know its time to brush their teeth. So these moments drift over the blue, sunny skies of this series like dark, wispy clouds that occasionally intrude on the lull of the lazy, endless summer holiday as brief reminders of their impending adolescence and coming adulthood. However, it's still something far away on the horizon and there's nothing that will impede on the summer-time mystery adventure!

So, yeah, The Mystery of the Disappearing Cat is another top-notch (locked room) detective story and stands closer, quality-wise, to what made The Mystery of the Invisible Thief such a pleasant and welcome surprise. So, hopefully, there's more where those two came from.