Earlier this year, I tracked down and reviewed an obscure, hard-to-get Japanese light novel in The New Kindaichi Files series, Operazakan – aratanaru satsujin (Opera House, the New Murders, 1994), written by the Soji Shimada of the anime-and manga detective genre, Seimaru Amagi – who crafted a beautiful, perfectly executed theatrical (locked room) mystery. One of the better entries in the Kindaichi franchise demonstrating Amagi is a mystery writer who's firmly entrenched in the traditions of the shin honkaku school. 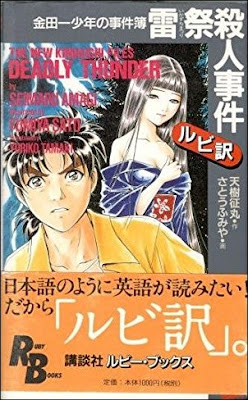 A fact he already proved with another light novel, Dennō sansō satsujin jiken (Murder On-Line, 1996), which is perhaps the first whodunit to use the internet in a meaningful way. Not to mention his original manga stories/anime adaptation of The Prison Prep School Murder Case, The Rosenkrauz Mansion Murders and The Legendary Vampire Murders. So I was eager to get my hands on the other two translations in the series, but those editions were intended for Japanese readers learning to read and speak English. Consequently, the well of secondhand copies in the West is practically empty and bone-dry.

Nevertheless, I managed to get hold of a copy of the sixth title in the series, Ikazuchi matsuri satsujin jiken (Deadly Thunder, 1998), which is the fourth and last novel to be translated and is a relatively minor story compared to the bigger, previously mentioned cases – centering on "a spontaneous crime" with an improvised trick. A trick turning an otherwise simple, straightforward murder into an impossible crime! It's not the no-footprints trick that makes Deadly Thunder somewhat standout, but how the plot combined everything from elements of cultural anthropology and entomology to geology and meteorology. All of these different aspects come together in the remote, unique setting of the story with the result reminding me of the regional mysteries by Todd Downing and Arthur W. Upfield. Two names not often associated with the Japanese shin honkaku detective story.

Deadly Thunder has a standard enough opening with Hajime Kindaichi and Miyuki Nanase traveling to a tiny, remote village to visit a former classmate, Akie Asaki.

The land around Kumoba Village is "shaped like a valley or a basin," which makes it very hot during the summer with clouds forming above the surrounding mountains to produce heavy thunder and rain storms. In the past, the locals thought these thunderstorms were an act of the gods and appeased them with the three-day Thunder Festival. A long-standing, unbroken traditional of 300 years that has preserved to the present-day, but the rain and thunderstorms also gifted the village something special and unique. A kind of clay that's only found in Kumoba Village, which is washed down from the mountains.

Akie comes from a long line of potters whose "curious, translucent white" pots were presented to the Shogun during the Edo period and the ground their family home stands on has the best pottery clay, which is why it's surrounded by a large, foreboding wall with spikes on top – erected by previous generations "to protect the clay from robbers." She has to share the home with her stepmother and stepsister, Hazuki and Shigure Asaki, who Akie and her aunt, Haruko, consider intruders ("those two"). They also have a quasi-residential house guest staying at the annex, Kyoichi Muto, who's an entomologist. Apparently, the village is also rather unique in its "variety and number of cicadas."

So the setting is very well piece of miniature world-building as Amagi created a small, unique geographical area and populated it with a unique, somewhat isolated culture. A culture with its own history, religious practices and even architecture. Such as all the houses being low built, single-storied "to avoid being struck by lightening" with a tall tree in every garden to "serve as a lightening conductor." Another interesting aspect is how rich Deadly Thunder is in sound. Deadly Thunder is filled with the sound of falling rain, claps of thunder, chanting, beating of drums and "the incessant drone of cicadas," which all helped elevate a mostly routine detective story. 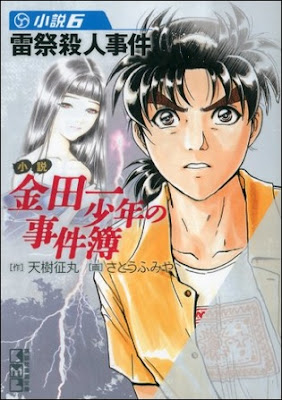 This kind of world-building is unfortunately a rarity in the detective genre, but Amagi has done it before, on a much larger scale, for Detective Academy Q with The Kamikakushi Village Murder Case. I co-reviewed the anime adaptation with Jim here.

Anyway, as the story moves towards the halfway mark, everyone begins to prepare for the first day of the annual Thunder Festival, but the celebration, or rather spectacle, ends with Hazuki discovering Muto's body in annex – bludgeoned to death. The body was covered in "hundreds, no thousands, of cicada shells," but even more inexplicable where the two sets of footprints going from the back of the house to the annex. A set of fresh, recently made prints belong to Hazuki, while the older, rain washed tracks were made by the well-worn, easy to identify sandals of the victim. So with the question of time and rain taking into consideration, the tracks turned the murder into a locked room mystery!

Deadly Thunder has only one body and three suspects, which has been done before in the series (e.g. The Blood Pool Hall Murder), but not very often and the plot really needed a good locked room-trick to give the plot some weight. Thankfully, the locked room-trick delivered as it did something new with the no-footprints scenario, but with all the clues in place necessary to arrive at (nearly) the same conclusion as Kindaichi. Why the body was covered in cicada shells was an inspired piece of plotting functioning as both a clue and a red herring.

The reader has an easier time putting all the pieces together than Kindaichi as he has to deal with a local policeman, Detective Akai, who's more annoyed than impressed by the grandson of "the master detective Kosuke Kindaichi." Even if he "solved several murder cases and mysteries that the police couldn't solve." Detective Akai only sees an ordinary high school student who speaks to adults like they were taking classes together. Kindaichi has to learn and show a little humility before getting an opportunity to prove himself to Detective Akai. One of those many small touches that made the story shine.

There is, however, a minor problem with the solution. Amagi added a last-minute twist that gave the story an ending as black as the ink with which it was printed, but not a fair surprise as it's impossible to anticipate the motivation behind the act. A smudge on an otherwise very well written, competently plotted detective story.

That being said, the good definitely outweighed the bad with a simple, but good, locked room-trick and a splendid, vividly realized setting, which told its story in less than a 130 pages with full-length illustrations. The short length proved to be an asset as it enlarged all its strong points and prevented the story from overstaying its welcome by dwelling on its weaknesses. So, yeah, a perfect detective story to nip at during a lazy summer afternoon.