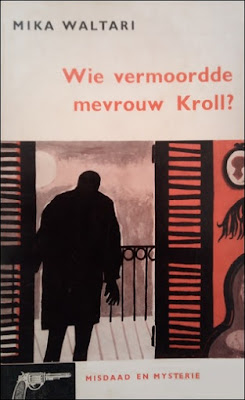 There is, however, an obscure, 1960s Dutch translation of Who Murdered Mrs. Kroll? and a copy of Wie vermoordde mevrouw Kroll? finally came my way. Today's post is going to be a poorly written, pan-European review of the Dutch translation of the Swedish edition of a Finnish detective novel in English. So please be patient, my Anglo-American friends.

Who Murdered Mrs. Kroll? opens at a shabby, rundown apartment building owned by a strictly religious and wealthy, but stingy, widow, Mrs. Alma Kroll – who lived on the top floor. One morning, the tenants notices "an unpleasant smell of gas" on the staircase and the postman is greeted by a strong, gassy smell when he lifted the flap of Mrs. Kroll's mail-slot. Everything remained deadly quiet inside. So they call in the police to break open the door and discover the bodies of "the old miser" and her dog, which appears to have been an accidental gas-poisoning. A kind of accident that was only too common in those days.

Brigadier Frans J. Palmu is a rough edged, old-school policeman with a much younger, university educated assistant, Toivo Virta, who's completely up-to-date with the scientific literature on criminology and criminal psychology. Virta also doubles as the story's narrator and they beautifully play off each other.

While Virta is the more scientifically grounded of the two, he wishes his superior had "a little bit of imagination," but Palmu tells him if he had any imagination he would have it "surgically removed or resign." Palmu more than once has to reprimand him not to indulge in romanticism, but respects his intelligence with the tendency to take credit for his ideas. So you can compare their partnership to Christopher Bush's Ludovic Travers and Superintendent George Wharton.

Palmu concludes that the death of Mrs. Kroll was not an accidental gas-poisoning, but a calculated, carefully-staged murder. A very "special murder" that's "committed once every ten years." However, the murderer made a few costly mistakes. Firstly, the dog had its neck savagely broken and the murderer had tried to put the body in a natural position on its pillow. Secondly, two-hundred thousand Finnish marks in cash is missing and someone may have tampered with Mrs. Kroll's sleeping pills, but Palmu's inspection also revealed that the murder is an impossible crime in appearance only – which is why I didn't use the "locked room mystery" tag. I can see how it ended up in Adey's Locked Room Murders, but you'll be a little disappointed, if you expect to find one. What can I say? Goddamn Scandinavians! 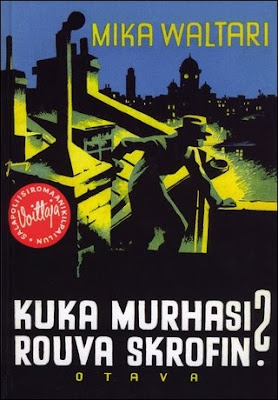 So the plot becomes primarily concerned with the who-and why with a closed-circle of suspects and motives that were thrown in disarray by a last-minute testament. Mrs. Kroll was a member of the Congregation of Bethlehem, a Protestant sect, who were set to inherit a sizable chunk of her fortune to build a church. But she found out something unsavory about their leader, Pastor Mustapäa. So she immediately changed her testament, which now completely favored her stepdaughter and nephew. Mrs. Kroll hoped to unite them in marriage, but Kirsti Kroll and Karl Lankela had incompatible personalities who don't really like each other. There's also Mrs. Kroll's underpaid, downtrodden lawyer, Mr. Lanne, to consider and Lankela's close friend and surrealistic painter, Kurt Kuurna, to scrutinize.

Palmu and Vitra have to do lot of talking and scraping to get a clear story and gather all of the "tangible clues" they can find, which comprises of a matchstick, shoe prints, drops of blood and a defective lock on a courtyard gate. I know this sounds like Waltari was dragging-the-marshes with a pinch of humdrum detection, but Who Murdered Mrs. Kroll? is a pleasantly told, leisurely paced detective story, which somehow worked really well here. There was some nicely done scenes like an enthusiastic, 15-year-old boy showing Palmu how school boys entered the courtyard by manipulating the defective lock. A discovery that eliminated another obstacle for both the murderer and the detectives.

So you gentle drift towards the solution with perhaps the biggest surprise being tucked away at the end of the penultimate chapter, which ends with a full-blown, Ellery Queen-style "Challenge to the Reader" – announcing that "all the facts are now in the hands of the reader." Why not add a pinch of Americanism? This review is already an international affair. I wasn't able to answer every single question, but did, sort of, figured out the murderer's identity and motive.

Who Murdered Mrs. Kroll strongly reminded me of C. Buddingh's Vrijwel op slag (Almost Instantly, 1953), a Dutch detective novel, which both attempted to create homegrown strain of the Anglo-American detective story. At the time, they locally were a big fish in a small pond, but, compared to those Anglo-American counterparts, they're nothing more than good, well-intended, second-tier detective novels. So nice to have and read, if they happen to come your way, but nothing to lose sleep over if they never do.

A note for the curious: John Pugmire and Brian Skupin's mega locked room and impossible crime anthology, The Realm of the Impossible (2017), has a two-page extract from a Finnish novel, Aleksis Kivi's Seitsemän veljestä (Seven Brothers, 1870), discussing and solving a fascinating and original no-footprints mystery.