Cornelis Buddingh' was a Dutch poet, critic, chess player, translator and a connoisseur of detective stories who translated novels by Herbert Brean, Leslie Charteris and Ethel Lina White into Dutch and some of his reviews can be read on the DBNL website – discussing writers like Agatha Christie, Ellery Queen and Zelda Popkin. Although I was not a fan of him trashing John Dickson Carr's writing or describing Sir Henry Merrivale as a "vage houten klaas" ("a sketchy wooden Punch puppet"). 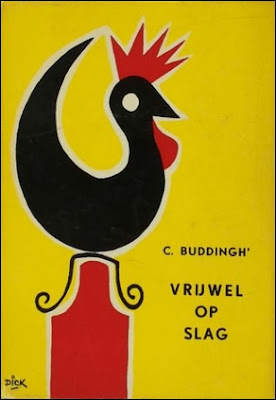 During the early 1950s, Buddingh' opined that, "if the Dutch detective wants to have its own atmosphere and character," the Dutch detective story has "to have a Dutch setting, populated with Dutch characters, where a murder committed by a Dutchman is solved." You have to remember that a big chunk of our pre-WWII detective fiction took place on foreign soil and this slowly began to change towards the end of the 1940s, which had absolutely nothing to do with us losing the colonies. We were planning to go home anyway. So with the detective story coming home, the 1950s became a short-lived Golden Age for Dutch detective fiction. A fact I've only recently uncovered and it lead me to A.R. Brent's Voorzichtig behandelen (Handle with Care, 1948) and W.H. van Eemlandt's Kogels bij het dessert (Dessert with Bullets, 1954), which is why I reviewed them back-to-back last month.

A year after his public proclamation on the future of the Dutch detective story, Buddingh' published his own detective novel, Vrijwel op slag (Almost Instantly, 1953), but as we all known, it's easier to be a critic than a craftsman – something the noted mystery critic and author Anthony Boucher could have attested to (e.g. Rocket to the Morgue, 1942). Buddingh' was already on thin ice with me for badmouthing Carr (pure heresy!). So let's see if he was as good at putting a plot together as he was in picking them apart.

Buddingh' picked as his detective the son of the former Chief Commissioner of Rotterdam, Rokus Huet, who's studying medicine in Amsterdam, but prefers to spent most of his time procrastinating or playing chess. Huet looks with horror at his future as a doctor and having to rise before noon. When the story opens, Huet is visiting an old friend in Gouda, Inspector Karel Jonkman, who's an artistically-inclined detective who donned a police uniform to honor the memory of his father, but his heart wasn't fully dedicated to the job. What he really wanted to do was paint.

During his stay with Jonkman, Huet is introduced to a local painter and friend of the inspector, Gerard van Gelderen, "who swears by Picasso" and they meet a young couple when visiting the artist at his studio, Marius Weekenstro and Elly Kreukniet – more or less secretly engaged. And upon hearing Jonkman is a police inspector, Marius seizes to opportunity to complain about Elly's uncle and legal guardian, Jochem Kreukniet. Kreukniet is a legal adviser who reputedly made his small fortune with blackmail and collaborated with the Nazis during the occupation, but at home, he acts like Victorian-era domestic despot and treats his niece with "a subtle sadism" that translated in Nelly being "bullied and harassed and humiliated" on a daily basis. And he's assisted in this by his wicked housekeeper, Ms. Gonda Luning. Generally, she's kept on a very tight lease and her uncle even sicced the police on Marius, because they kept seeing each other every opportunity they got. This is why Elly is taking drawing lessons in secret.

Jochem Kreukniet is practically tailormade to be the victim and, two days later, he's indeed murdered at his home with a blow to the back of the head, but his murderer didn't stop there. The murderer emptied an ashtray over the body, placed a folded one gulden bill in his lapel and drew a circle with purple lipstick on his forehead!

Jonkman and Huet quickly catch on that there were a lot of people, personal and professional, who had a reason to beat Kreukniet into an early grave. De Lange (didn't catch a first name) is Kreukniet's slippery business partner, who badly needed money, but their partnership had begun to deteriorate and Kreukniet had hinted that he was going to be cut out of his will. But there were also three women in his life who had either lost something or stood to gain tremendously. Eliza Westvaan is new, very posh, secretary and could have been the future Mrs. Kreukniet. She had pushed Kreukniet's previous secretary and mistress out of the picture, Okkie Maffel. The third woman was actually the first Mrs. Kreukniet and she inherited her ex-husband's house and nearly half of his fortune.

Almost Instantly is pretty much a by-the-numbers whodunit with a slightly eccentric detective, an official police inspector, a body, a small circle of suspects, some bizarre clues and detective work mainly contained to interviews – occasionally testing an alibi or clearing up a side-thread. Naturally, this wasn't helped by the fact that nearly everyone was up to something around the time of the murder. Some of which took place around the scene of the crime. I think you can best compare Almost Instantly to a competent, but fairly average, Christopher Bush novel from the same period. Not bad, but not outstanding.

So, technically, Buddingh' succeeded in writing a genuine detective novel, but stylistically, Almost Instantly isn't a Dutch detective novel. It's a British detective novel with a Dutch setting and Dutch characters. You can't miss how much Buddingh' was influenced by the British Golden Age mystery writers and there was even a bookshelf scene in which Huet sees a whole row of Dorothy L. Sayers, Agatha Christie, Margery Allingham, Nicholas Blake, Edmund Crispin and Michael Innes novels. Huet identifies them as "his own favorite authors in the genre," but the explanation makes it even more obvious. Such as the choice of murderer and (uncommon) motive, which recalls a certain mystery writer and the reason why the murderer planted those strange clues on the body had been used before by Carr. Carr executed that idea better and with much more subtly than Buddingh'. Not so easy, is it? :D

A second, stylistic, flaw are the nonsensical names of some of the characters. I'll admit that it was mildly amusing to name the victim Kreukniet (does not crease) and have him bludgeoned to death, but it didn't help give the story that authentic Dutch character Buddingh' had been pleading for the year previously. You would think that was the one thing he wanted to do with Almost Instantly.

So, yes, technically, Almost Instantly is a decent and solid enough detective novel with a well hidden murderer, who can still be spotted, but most of the story travels over territory that had been trampled during the first half of the previous century and only difference is that it was written in another language – even that was done with a distinctly English accent. Nevertheless, it's always a pleasure to read an honest to God detective novel in my own language, which makes its blandness a little more forgivable.
Geplaatst door TomCat on 11/21/2020