Forever Hold Your Peace: "About the Disappearance of Agatha King" (1932) by Anthony Abbot

Fulton Oursler was an American journalist, critic, editor and writer, who's best known for his bestselling book The Greatest Story Ever Told (1949), but, as "Anthony Abbot," he produced a short-lived, now obscure, series of detective novels and short stories – which were firmly rooted in the traditions of the Van Dine-Queen School of Mystery Fiction. There is, however, one notable difference: Abbot's series-character is not a dilettante detective, like Philo Vance or Spike Tracy, but a sharply dressed New York police commissioner, Thatcher Colt. 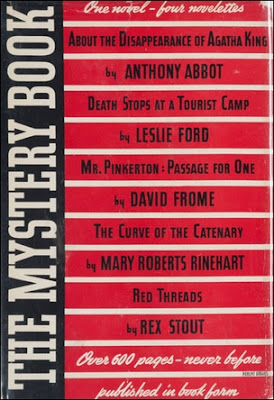 Anthony Abbot has been rightly praised as "one of the most important of the "little known" mystery writers" whose novels are distinguished by "a wonderful plot complexity" and a good hand at misdirection, but they have been out-of-print for decades. And there are no apparent plans to reprint the series anytime soon.

Luckily, Alexander, of the Writer's Desk blog, provided me with one of his short stories that was listed in Robert Adey's Locked Room Murders (1991).

"About the Disappearance of Agatha King" was originally published in the June, 1932, issue of Cosmopolitan and reprinted years later in The Mystery Book (1939), but has since vanished from sight, which is a shame, because Abbot came up with a new solution to Conan Doyle's "The Adventure of the Noble Bachelor" – collected in The Adventures of Sherlock Holmes (1892). Some would even argue Abbot improved on the original idea by adding an impossible disappearance to the mix. ;)

Reggie Wallis is "the patron saint" of the New York nightclub scene and “some day soon he would come into two ancestral fortunes,” but, when the story opens, he's about to marry the blond and beautiful Agatha King. A match that greatly pleases her ward, General King, because the marriage is his "pawn ticket to redeem the family fortune." But a day before the wedding, Reggie is sitting in Thatcher Colt's office to ask for police protection.

Once upon a time, Agatha was deeply in love with an old friend of Reggie, Jim Dwight, but old General King naturally disapproved and trouble began, which ended in them splitting up and him moving away. Unfortunately, trouble kept dogging Jim's footsteps and was sentenced to ten years in chains after intervening in the beating of a black man in the deep South. So he asked Reggie to tell everyone at home that he was dead and that's where things would have remained, but Reggie wrote him that he was going to marry Agatha and Jim wrote back that he would murder him, Agatha and the whole damn world – promising he would "smash the universe that had smashed him." Reggie becomes nervous when he learns Jim had broken out of prison.

Thatcher Colt immediately removed Agatha from her home and places her in a hotel, registered under an alias, where "every corridor was manned with sentries." Not a single fire escape, air shaft or exit was left unobserved. Somehow, Agatha King vanished without a trace from a locked and closely guarded suite of rooms!

Admittedly, the locked room-trick is nothing special and the story should not be read solely as an impossible crime, but what makes "About the Disappearance of Agatha King" a fantastic detective story is the splendid and detailed clueing of the who-and why – punctuated by a very well done and satisfying ending. A fine and glittering example of the short Golden Age detective story more than deserving to be reprinted. It would be a perfect story for that hypothetical, American-themed British Library Crime Classics anthology, Bloody Colonials.
Geplaatst door TomCat on 11/01/2020