Inspector De Klerck and the Elusive Death (2020) by P. Dieudonné

P. Dieudonné's Rechercheur De Klerck en de ongrijpbare dood (Inspector De Klerck and the Elusive Death, 2020) is the third novel in the series of Rotterdam politieromans (police novels) about Inspector Lucien de Klerck and his assistant, Ruben Klaver, but this time, Dieudonné breaks the mold of the Amsterdam School of the Dutch police novel – popularized by the late A.C. Baantjer. Inspector De Klerck and the Elusive Death is a traditional-styled detective novel, updated to the 21st century, with not one, not two, but three impossible disappearances! These impossibilities are something else compared to your garden variety no-footprints situation or a homely locked room murder. 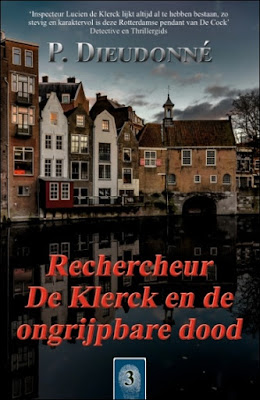 The story begins with a cleaning lady finding the body of her employer, Romano Pasqualini, lying in the front room on the first floor of his home, in Delfshaven, with the back of his head resembling "a mushy mess of blood and hair." An important detail ensuring the reader there was a man in that room who was as dead as a doornail. She immediately alerted the police and posted herself at the front door until they arrived.

A short time later, De Klerck is cycling to work when he notices the squad car and stops to offer his assistance to the two policemen, but what greets him on the first floor landing is "a suffocating smoke" coming through the cracks of the door – inside the room a fire was spreading rapidly. But what he didn't see was a body! When the firefighters had done their work, they discover that the windows were locked from the inside with exception of a small skylight that's "too small to squeeze through" and "virtually inaccessible." Nobody could have escaped through the front door with either the cleaning lady or the police standing there. So how did the body vanish with the same question applying to the person who made it disappear and attempted to torch the place?

De Klerck and Klaver have their work cut out for them and the disappearance of Romano Pasqualini's body is not the only complication in this uncertain, elusive murder case. Romano was 25-years-old and lived in an expensive, 17th century house, but made a living delivering pizzas and his prospective father-in-law is not exactly thrilled that he was seeing his daughter. Apparently not without reason.

De Klerck is approached by private detective, Fred Kroon, who working on behalf of an insurance company to track down a tightly organized gang specialized in jewel robberies and spectacular, seemingly impossible, escaped. One such occasion saw the police in hot pursuit of two gang members on a motorcycle, two police cars on their tail and a third meeting them head on, but, somewhere mid-way, they simply vanished into thin air – as the three police cars passed each other. There's a slope on both sides, overgrown with trees, with fences behind it. So it was not possible to disappear from that stretch of road. And yet... they did. A trick repeated later on in the story when a dare devil races through the city, performing dangerous stunts and leading the police on a merry-go-round, which seems to come to an end when he drives into a tunnel cordoned off by the police. Just like that, the motor cyclist disappears again and magically reappears some distance behind the police cordon, which is captured by security cameras inside the tunnel and witnessed by a police helicopter pilot in the sky!

This is why Kroon suspects Damiano Pasqualini and his young brother, Romano, play a key role in the gang, because Romano has a YouTube channel on which he uploaded videos of himself performing very risky, death defying motorcycle stunts – radiating with pride and sheer joy. Romano's dead. So he couldn't have been the one who raised hell in the city and used as a sealed tunnel as a portal to reappear behind the police cordon. I expect to find this kind of stuff in Gosho Aoyama's Case Closed series (e.g. vol. 61) or the work of Soji Shimada (e.g. "The Running Dead," 1985), but not in, what has been up to this point, a typically Dutch series of police novels. However, I'm not against this becoming the new norm.

Coming across a Dutch locked room mystery is always a special treat. I remember that shiver of excitement when reading Cor Docter's Koude vrouw in Kralingen (Cold Woman in Kralingen, 1970) in which a group of people had gathered in front of a locked bedroom door and someone flings the key under the crack of the door into the hallway. But when they open the door, all they find is a dead woman. Anne van Doorn's De man die zijn geweten ontlastte (The Man Who Relieved His Conscience, 2019) was a rare treat with two well executed impossible crimes, but Inspector De Klerck and the Elusive Death not only added one more for good measure, but went all out in how they were presented. But what about the solutions, you ask?

The strange disappearance of the body, and murderer, from the locked, watched and burning, smoke-filled house is the best of the three with a solution breathing new life in an old idea that had been experimented with before – only it never really worked in the past. Reason why it never worked (unless staged under tightly controlled circumstances) is it required something that's not as easy to come by as it's made out to be. Even then there's no guarantee it would work. However, the present smoothed out that problem and provided something that made the trick work in a way that wouldn't have been possible in the 1930s or '40s. Dieudonné seized it with both hands and the characterization helped to reinforce the locked room-trick.

Diedonné tipped his hand with a clue to the second impossibility that gave away how it was done, but suspect this was done on purpose to make third disappearance, and reappearance, look even more impossible. Solution to how the motorcycle went up in smoke doesn't explain how it materialized outside the tunnel. So that was nicely done. And in spite of the reckless, dare devil antics, the solutions are simple and surprisingly believable. Just as a contemporary take on the impossible crime novel, Inspector De Klerck and the Elusive Death is excellent and it was a joy to read.

There's more to the story than a string of miraculous vanishings. De Klerck and Klaver have to figure out what happened to the body and who's responsible, which was handled a trifle weaker than the other plot-threads. A coincidence, or two, were needed to tie everything together with one of the coincidences stretching things a little, but hardly enough to dampen my enjoyment of the book. E-Pulp gives us a glimpse with Dieudonné of the genre's Golden Age when writers were given the time and opportunities to hone their skills, improve and finding a voice of their own – hopefully building an audience along the way. Rechercheur De Klerck en het doodvonnis (Inspector De Klerck and the Death Sentence, 2019) was written as an homage to Appie Baantjer, but the plot was very light and the solution to the fascinatingly presented bridge-murders lacked ingenuity. Rechercheur De Klerck en het duivelse spel (Inspector De Klerck and the Diabolical Game, 2020) used the tried and tested Baantjer formula to write a much more traditional detective story with improved clueing and a new trick to create a cast-iron alibi. Inspector De Klerck and the Elusive Death is a full-blown detective novel with a tricky, complicated plot, more improved clueing and three daringly executed impossible crimes. I found this to be very rewarding and can't wait to see what the fourth, tantalizingly-titled Rechercheur De Klerck en het lijk in transit (Inspector De Klerck and the Corpse in Transit, 2021) has in store!

Inspector De Klerck and the Elusive Death continues to improve on its predecessors and did in a most spectacular way with three originally posed and solved impossible crimes, which are too rare in this country. So highly recommended to all the Dutch-speaking readers of my blog and publishers looking for non-English crime-and detective fiction to translate.

Note to the reader: sorry for two back-to-back 2020 reviews, in as many days, but they are recent publications and didn't want to wait with posting the reviews until November. So they were squeezed in after the fact.