Inspector De Klerck and the Diabolical Game (2020) by P. Dieudonné

Rechercheur De Klerck en het duivelse spel (Inspector De Klerck and the Diabolical Game, 2020) is the second novel in a brand new series of politieromans (police novels) written by a Dutch-born Canadian, Paul Dieudonné, who dedicated Rechercheur De Klerck en het doodvonnis (Inspector De Klerck and the Death Sentence, 2019) to the memory of the master of the Dutch politieroman, A.C. Baantjer – littering his stories with nods and winks to his work. Dieudonné is not the first writer to attempt to become the next Baantjer. 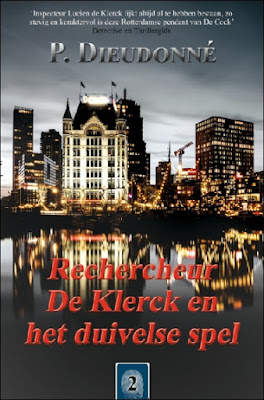 Towards the end of his life, Baantjer even tried to become the next Baantjer when he co-created the Bureau Raampoort-series with his former policeman colleague, Simon de Waal. Dieudonné already managed to stand out in this crowd with better writing, plots and an emerging presence of its own.

Inspector De Klerck and the Diabolical Game is set in the publishing world and Dieudonné thanked the people behind his own publisher, E-Pulp, whom told him about "the dark side of the book trade" and "most examples in this story were taken from life."

Inspector Lucien de Klerck, of the Rotterdam Police, is visited one evening by an "exceptionally beautiful" woman, named Laurette Kasemier, who's the hardworking owner of a small, independent publishing house, Amor Vincit Publishing – specialized in publishing romantic fiction. A tough job with "a very high risk of getting burned," financially, which is bad enough without being terrorized by a sleazy competitor. Stefan le Couvreur is the man behind Burgman & Pijffers, a publisher of pulp fiction, who has been waging a long-term, online guerrilla campaign against Amor Vincet. Every time Kasemier tries to promote her books, Le Couvreur is there with disparaging remarks and negative comments. And this sustained campaign has created "a cloud of damaging negativity" around her publications. Kasemier believes this harassment campaign was spurred on by her soon-to-be ex-husband.

There is, however, precious little De Klerck can do except advising Kasemier to have a good, openhearted conversation with Le Couvreur, because it's kind of difficult "to harass someone you know personally." A disgustingly European solution, I know. This is where the case would have ended for the police, but, two days later, De Klerck and Ruben Klaver are summoned to the scene of a gruesome murder.

Ewout van Bokhoven was a respectable notary/solicitor whose body was found in the sunroom of his house, slumped in an easy chair, with the back of a silver Parker pen protruding from the left eye socket – destroying the eyeball. On the table lay an old, yellowed paperback with a woman on the cover who's being menaced by a man with a crossbow, but, instead of an arrow, "there was a silver pen on the crossbow." A bizarre murder that becomes increasingly complicated when they discover that Van Bokhoven is the husband of the struggling publisher, Laurette Kasemier!

There are many potential suspects, plot-threads and red herrings to keep both the police and reader busy, which range from disgruntled, underpaid writers and dishonest representatives to angry clients and the neighbors of the victim. But most notable were the plot-thread concerning an unknown, recently surfaced manuscript from the hands of a famous pulp writer and the second and third murders.

Firstly, the well-known, but sadly fictitious, pulp writer is "Geoffrey Parker," a pseudonym of a Dutchman, Frederik Poleij, who made millions with his pulp stories about "the hero of the Chicago underworld," Don Fernando. Parker died in the 1980s and his publisher claimed an unpublished manuscript has turned up, but is this true, as it disappeared as quickly as it appeared! Secondly, the pulp novel left at the scene of the next murder is Rosina Tarne's You Murdered Me!!! One of John Russell Fearn's unpublished, long-lost manuscripts I talked about in The Locked Room Reader: A Return to the Phantom Library. An extremely obscure reference, perhaps a little too obscure for most Dutch readers, but I appreciated it. And it might be the first-ever reference in a detective story to Fearn.

The third and last murder, committed in the penultimate chapter, has a possibly new take on the problem of the cast-iron alibi, but, because it happened so late in the story, the alibi-trick felt underused.

However, the trick provides the bulk of the solution with an extra, crushing layer, which is always welcome. I would also welcome a future novel in this series with the title Rechercheur De Klerck en het onwrikbare alibi (Inspector De Klerck and the Unshakable Alibi). We're still shockingly low on Dutch detective novels with locked room murders, dying messages and unbreakable alibis.

Inspector De Klerck and the Diabolical Game showed tremendous improvement over Inspector De Klerck and the Death Sentence with a better realized milieu and a bigger pool of suspects, filled with red herrings, but the observant reader can spot the clues pointing straight in the direction of the murderer – only smudge is that you can't work out the exact details of the motive until the last leg of the story. But, if you worked out the who, you can make an educated guess in which direction the motive runs. I believe it helped that this second novel was more than a tribute to one of the greats. Dieudonné plays to Monk to Baantjer's Columbo with De Klerck series. Every one who has been weened on Baantjer will recognize the style of storytelling and characterization, but not too derivative that it can't stand on its own. That makes it a continuation, rather than a copy, of the traditional, Baantjer-style Dutch politieroman. So I can't wait to see what Dieudonné is going to do in his third novel.
Geplaatst door TomCat on 3/15/2020