The Kindaichi Case Files: The Headless Samurai by Yozaburo Kanari and Fumiya Sato

Previously, I looked at a landmark novel of the Japanese detective story, Inugamike no ichizoku (The Inugami Clan, 1951) by Seishi Yokomizo and the detective on that case, Kosuke Kindaichi, is as iconic a figure in Japan as Sherlock Holmes is in the West – referred to some as the Columbo of the East. Yokomizo's famous detective has a well-known grandson, Hajime Kindaichi, who debuted in 1992 in Weekly Shōnen Magazine. A serialized mystery manga that has since spawned numerous manga-and anime series, light novels, video games, live action movies-and TV series and even had a crossover with Conan Edogawa from Detective Conan. 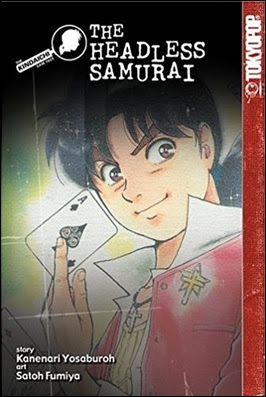 Originally, The Kindaichi Case Files was written by Yozaburo Kanari and my opinion of him, as a mystery writer, is somewhere at the bottom of the Mariana Trench. Kanari would probably crack my top 3 of least favorite mystery writers and his hackwork has negatively colored my perception of the series.

Initially, I abandoned the series after only three (or so) volumes of the original series, which began with the uninspired The Opera House Murders that heavily leaned on ideas from Gaston Leroux's Le mystère de la chambre jaune (The Mystery of the Yellow Room, 1907) and Le fantôme de l'opéra (The Phantom of the Opera, 1910) – fluffed up with an impossible crime trick cribbed from a G.K. Chesterton story. The Mummy's Curse is a poorly abridged version of Soji Shimada's Senseijutsu satsujinjinken (The Tokyo Zodiac Murders, 1981) bordering on plagiarism. I don't exactly remember my third one, but it could have been No Noose is Good Noose or The Legend of Lake Hiren, but they were both equally poor in plot and execution.

I abandoned The Kindaichi Case Files with no intention of ever returning, but than I ran across Ho-Ling Wong and he insisted there were quality detective stories in the series. So I reluctantly returned with varying degrees of success. The Graveyard Isle was incredibly weak and don't remember thinking too much of Treasure Isle either, but Death TV, The Magical Express and The Undying Butterfly were generally excellent. House of Wax was even superb and still my favorite entry in this series.

There are, however, a few holes in my reading of the English edition that were published in the West, because TokyoPop folded in 2011. One of these titles, The Headless Samurai, had been recommended to me by a commenter, Jonathan, on my review of The Prison Prep School Murder Case, a multi-part episode of the latest Kindaichi anime – claiming that the story was even better than The Magical Express and House of Wax. Naturally, I was skeptical and had a very good reason to be, which has to do with my reason for picking The Headless Samurai as my follow up to The Inugami Clan.

You see, what I read about the plot of The Headless Samurai made me suspect Kanari had been "borrowing" from Yokomizo's celebrated detective novel and was ready to tar-and-feather him for it. I even hired an angry mob with torches and pitchforks. I was fully prepared for a good, old-fashioned verbal lynching, but, as much as it pains me to say, I turned out to be wrong. Again. The Headless Samurai turned out to stand toe-to-toe with House of Wax and kind of liked what Kanari did with the plot and (visual) clueing. Don't get me wrong. Kanari is still a hack of the first water, but you have to give credit where credit's due, you know. 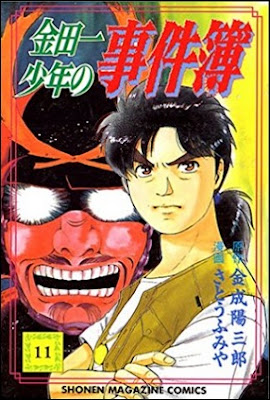 The Headless Samurai has Inspector Kenmochi traveling to the remote mountain village of Kuchinasi in the Gifu Prefecture to visit a childhood friend, Shino Tatsumi, who had married into a wealthy family, as the second wife of Kuranosuke Tatsumi, but after he passed away she started to receive threatening letters – all of them signed by "The Cursed Warrior." Kenmochi is accompanied by two familiar faces, Hajime Kindaichi and Nanase Miyuki.

There are a few superficial resemblances to The Inugami Clan in the opening stages of the story. One of these is a masked man, Saburo Akanuma, who they spot on the bus to the village and turns up again at the Tatsumi home as a guest of Shino. A second resemblance is the reading of the will, appointing Seimaru Tatsumi as the head of the family and "the heir to all its wealth," but the problem is that Seimaru is Shino's son who was adopted by her husband and an outsider – which means that his appointment comes at the expensive Ryunosuke, Moegi and Hayato. The three children from Kuranosuke's first marriage.

However, The Headless Samurai goes its own way after the setup and the plot is draped in a legend that has hung, like a dark cloud, over the village for centuries.

Over 400 years ago, the village was visited by an army general, Kaneharu Hiiragi, who was badly defeated during the time of the battle of Sekigahara and came to Kuchinasi to seek refuge with his men. Upon his arrival, the general crowned himself leader of the village and attempted to drive out the village chief, but General Kaneharu was betrayed by his soldiers. They killed their master, presented the severed head as peace offering to the chief and settled down in the village. Only General Kaneharu placed a curse on them with his dying breath, "my spirit will wander the earth" and "you will never be free," which was followed by a series of decapitations of his former men.

So the frightened villages began to appease his spirit by erecting a shrine dedicated to him and headless statues were placed representing the victims. And the opening of the story showed that the suit of armor of General Kaneharu has disappeared.

The Cursed Warrior makes an entrance like a Scooby Doo villain, when he slashes through a paper screen with a katana, before disappearing and only an impossibly vanishing trail of sandal-prints on the veranda. However, this side-puzzle is quickly solved by Kindaichi, but the problem is that this reveals the person wearing the armor came from inside of the house. Ah, yes, detective stories are the thinking man's Scream.

This is followed by the impossible murder of the masked man, Saburo Akanuma, who is housed in the only available room at the time. A vault-like room hidden behind a hidden, revolving door that looks like a blank wall. The room itself has an iron door with a lock made in Germany, which comes with a unique, custom-made key that can't be duplicated and the only window is a narrow square with iron bars – looking out over a wide, steep cliff with a river below. One evening, Kindaichi gets a phone-call from Saburo asking to ask him if he really is "the grandson of the famous detective," because he wants to tells him the identity of the katana-wielding samurai. 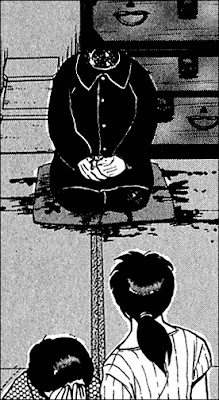 Kindaichi and Shino go to the Saburo's room to have a word with him, but when they arrive in the passage they hear him scream out, "IT'S THE CURSED WARRIOR." Kindaichi tells Shino to fetch the keys and when they can finally open the door they're greeted by his headless corpse sitting in the silent, moonlit room.

A well-presented locked room problem with a good false solution by Kenmoichi, which fitted only one suspect, who promptly dies, but the actual explanation is practical, simple and believable. Clever and original enough to avoid being disappointing. And nicely contrasts with Kenmochi's solution.

However, the locked room mystery and its false solution are not the gemstones of the plot. An experienced mystery reader with a passing familiarity of the Japanese detective story will immediately suspect a classic, Eastern-style corpse-trick is being placed right under their nose, but not one you can easily unravel and the plot cleverly plays with the cast-iron certainties given by modern forensics and results in a beautiful piece of misdirection – which was nonetheless prominently foreshadowed in the artwork. This also gave the murderer an acceptable motive for all of the theatrics, because they were necessary to answer that age-old question. What to do with the body?

The Headless Samurai was surprisingly strong on motives, which is normally a weak aspect of the series, because the plot tend to be written around the eternal avenger-from-the-past theme. The murderer here had an entirely different motivation. A motive showing that old sins can cast long shadows, the cussedness of all things general and that blood will out. What drives the murderer also gives the story some nice clues and made for a dark, tragic conclusion.

So, all in all, The Headless Samurai was a pleasant surprise and, if I come across as overly enthusiastic, it's because I was determined to hate it going in. But I was proven wrong. I don't mind it at all when that happens. Kanari is still a hack though.
Geplaatst door TomCat on 5/14/2018