Dead Man Twice (1930) is the third title in Christopher Bush's Ludovic "Ludo" Travers series and has been recommended to me several times by Nick Fuller and Curt Evans. The book considered to be one of the stronger titles from the early period of the series and not entirely without reason.

In this early title, Travers is still working as a financial adviser for that distinguished inquiry, advertising and publicity firm, Durangos Limited, which means that his role is still that of a chameleon in the background and cedes the stage to his friends, Superintendent Wharton and John Franklin – head of the Detective Bureau of Durangos Ltd. So the story has a slightly different feeling than those that have a more prominent role for Travers.

Franklin is visited in his office by Kenneth Hayles, a writer of hackneyed, cliché-ridden thrillers, who wants to use him and his office as a model for his next novel, but Hayles also co-authored Two Years in the Ring. A book he wrote together with Michael France, a gentleman boxer and heavyweight champion of Europe, who's scheduled to fight Toni Ferroni in New York and everyone expects him to bring the world title back to England. So their meeting ends with Franklin getting an opportunity to meet the public hero of the moment.

However, Frankling comes down to Earth again when France wants to consult him on a string of threatening letters, which gave him a few days to leave the country or his "numbers up," signed by "Lucy" and gave Franklin three specimens of handwriting to compare – all three specimens were procured from people who stand close to the boxer. France also asks Franklin to drop by his house, but when he arrived it looks as if nobody is home. The hammering with the door knocker and ringing the bell gets no response whatsoever.

After a while, the valet of France, Mr. Usher, arrives and opens the door, but what they find inside is a scene as bizarre as it's inexplicable.

The body of the butler, named Somers, was lying on the rug of the lounge with tumbler next to his outstretched arm and on the table, next to the decanter and siphon, stood "a small, blue bottle with a red poison label." A suicide note is found, "this is really the end of everything," but Usher recognizes the handwriting as that of his master, Michael France! So this prompts them to further explore the house and they find a second body in an upstairs room. France lay on the bedroom floor with a bullet wound in his forehead and a tiny, toy-like pistol two feet from his outstretched hand. However, the medical evidence reveals that the shot was fired from "a devilish awkward position" and "the bullet might have missed the brain altogether." And the awkward angle of the bullet is a clue as to what happened in that bedroom!

Travers is only a background figure in the investigation, who analyzes the published work of France and Hayles, which leaves all of the legwork to Franklin and Wharton. Once again, the performance Superintendent George "The General" Wharton demonstrated that we lost a great lead-character for a series of detective novels.

Layer by layer, Wharton slowly peels away the mysteries and is "worming his way into some subterranean and buried essential," but the complications are numerous and one of these is that there was a six-inch circle of glass cut out of the window – except this was not a garden-variety burglary. And then there's France's involvement with the wife of the well-heeled, aristocratic racing motorist and his chief financial backer, Peter Claire, who had planted Usher in France's house to keep an eye out. Compounding these confusing jumble of problems and the contradictory facts at the scene of the crime are a couple of durable alibis.

The unbreakable alibi is a trademark of Bush's detective fiction and this begs comparison with another craftsman of cast-iron alibis, Freeman Wills Crofts, but Bush's plotting technique actually makes him closer to John Dickson Carr and John Rhode than to Crofts. 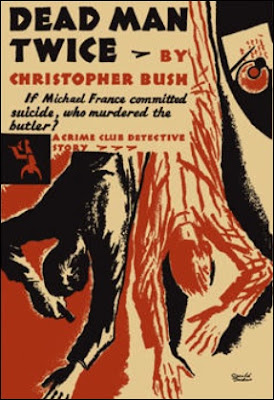 The murder of France could have easily been presented as an impossible situation and Bush's plots are often borderline or quasi-impossibilities (e.g. The Case of the Bonfire Body, 1936), but rarely crosses the border to become a full-fledged locked room mystery. Regardless, this could have been a nifty locked room yarn and the method, which also helped the murderer forging a cast-iron alibi, could have been plucked from the pages of Rhode's mystery novel. As a matter of fact, I have seen variations of this trick in the works of both Carr and Rhode.

Nevertheless, this could have been a nifty locked room and the murder method is something straight out of of a Rhode's novel. As a matter of fact, I have come across variations of this trick in the works of both Carr and Rhode. John Russell Fearn even used a very similar trick to create an actual locked room murder, but I believe Dead Man Twice predates all of them.

So I really liked this plot-strand of the story, which came with diagrams and floorplans, but the poisoning plot wasn't bad either and the nature of the crime, with all its complexities, fitted the personality of the murderer like a glove – which nicely contrasted with the more plot-technical killing of France. But the best part of the plot is how these plot-strands were intertwined and threw one of these plots in disarray.

Only thing you can hold against the plot is that the identity of the culprits were rather obvious. A problem corrected by the intriguing question as to how the murders were committed and the attempt to fit every piece of the puzzle together to form a logical and coherent picture of all the events.

I've not read the first title in this series, The Plumley Inheritance (1926), but feel confident in stating that Dead Man Twice is the first of Bush's baroque-style detective novels that introduced his favorite plot-device of having two murders taking place in close proximity of each other and link them together with a bale of plot-threads. An approach he used to great effect in Dancing Death (1931) and The Case of the April Fools (1933). The result is usually a pleasantly intricate, mind-twisting and challenging detective story and Dead Man Twice is not the exception to this rule.

Dead Man Twice is a grand old-fashioned detective story and more than worthy of the praise it has received, but, personally, I would not go as far as placing it right alongside the superb Cut Throat (1932) and the equally superb The Case of the Missing Minutes (1936). Dead Man Twice stands a step below them along with the previously mentioned The Case of the April Fools, The Case of the 100% Alibis (1934) and the Carrian The Case of the Chinese Gong (1935), which is not a bad company to be in.

So, a long story short, I continue to enjoy my exploration of Bush's detective fiction and will return to him soon, but first have to pick a title. Currently, I have whittled down my options to three titles: The Case of the Dead Shepherd (1934), The Case of the Hanging Rope (1937) and The Case of the Green Felt Hat (1939). Ah, luxury problems!
Geplaatst door TomCat on 5/18/2018