As you probably gauged from my previous blog-posts, I found my recent excursions into the distant and recent past of the genre sorely lacking in the plotting department. So I decided to smother this potential streak of letdowns in its infancy and turned to the latest title in the catalog of Locked Room International, Le double alibi (The Double Alibi, 1934) by Noël Vindry, which "JJ" gave a four-star rating and described the book as "the most twisty yet translated into English" by John Pugmire – which is quite a claim as Pugmire also translates the work of his beloved Paul Halter. But, hey, when have we ever disagreed on the merits of an impossible crime novel? 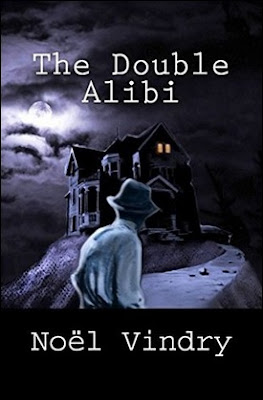 Noël Vindry was a juge d'instruction (examining magistrate) and the author of no less than twelve locked room novels, published between 1932 and 1937, which are of a quality and quantity "to rival his contemporary," John Dickson Carr, who was the acknowledged master of the impossible crime story.

Roland Lacourbe, the noted locked room expert and anthologist, even called him the French Carr, but Vindry is "largely forgotten by the French-speaking world" and "almost completely unknown in the English-speaking." A state of affairs Pugmire probably found intolerable.

Back in 2015, LRI published the first English edition of Vindry's debut novel, La maison que tui (The House That Kills, 1932), which had a plot that strung together three seemingly impossible murders, but the story-telling and plotting were stilted and contrived – resulting in a very tepid reception. John Norris, of Pretty Sinister Books, concluded that the book was "as cold and empty as a locked and sealed room." Gratefully, the second title to be translated, Le bête hurlante (The Howling Beast, 1934), proved to be an excellent detective novel that's best described as a novel-length treatment of the conversational detective story (c.f. G.K. Chesterton's "The Dagger with Wings" from The Incredulity of Father Brown, 1926) with an miraculous shooting at a 14th century castle. Absolutely brilliant!

The Double Alibi is Vindry's third novel to be translated into English and has an intriguing premise concerning a petty, two-bit criminal with too many alibis.

The story opens with the introduction of a pair of spinster sisters, Hortense and Gertrude Levalois, who live a quiet, respectable existence in the village of Limonest and are highly thought of by the village peasants for taking in a elderly, penniless relative, Aunt Dorothée – who may, one day, inherit a sum of money from a brother who lives as a miser in Lyon. So their charitable act is not entirely selfless, but there's an annoyance buzzing in the background that poses a potential threat to their respectable front.

Aunt Dorothée dotes on her good for nothing nephew, Gustave Allevaire, who is a small time, two-bit criminal with a record that includes such offenses as petty theft, breach of trust and swindling. And, equally shocking to the Levalois sisters, a "disdain for moral laws." Allevaire is one conviction removed from being sent to Guyane, a prison for habitual offenders, which did not deter him from burglarizing the home of Hortense and Gertrude. Apparently, he took five thousand francs from a desk and Aunt Dorothée's silverware, but he left behind a silver spoon with a "perfectly placed" fingerprint as evidence of his presence.

Firstly, Allevaire appears to have attempted to burglarize the home of M. Clermon, a wine merchant living in Bordeaux, but his secretary, Serge Madras, caught him in the act and recognized his face in the light of the electric torch – before he bolted like a started rabbit. Secondly, there's an abandoned place in the small town of Aubagne, near Marseille, known locally as the "Black House." The derelict house has a reputation of being haunted and, on certain nights, "a glimmer of light" could been seen through the slits of the shutters. A blood-curling scream coming from this house leads to the discovery of a murdered man and paperwork found on the body suggests that the victim is Allevaire. Or is it? And then there's the problem of distances between the three places.

Aubagne is 300 kilometers from Limonest, while Bordeaux is 500 kilometers away, but all of evidence appear to suggest Allevaire was in all three places at exactly the same time! 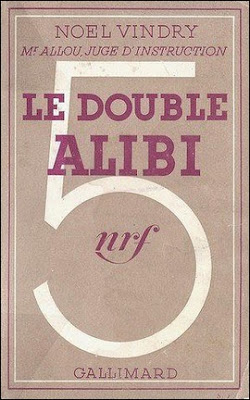 Regardless of appearances, Vindry's series-detective, M. Allou, cautions against blindly trusting physical clues and material evidence, because "nothing is easier to fabricate" despite their "rigorous appearance." Allou places his trust in logic and nothing else. So the alibi-problem here does not really count as an impossibility, because the whole illusion hinges on (easily) falsifiable evidence like fingerprints, documents and the statement of witnesses. As I pointed out previously, an alibi-trick can only be considered an impossible problem when the perpetrator appears to have been physically incapable, or unable, to have a committed a crime or been present at a certain place.

There is, however, a (minor) locked room conundrum tucked away at the end of the story and happens when an intruder miraculously appears inside a house, properly locked and shuttered from the inside, which also had been under constant police observation. A simple, but nicely done, impossibility with a basic solution, but applying it to make a person appear, instead of disappear, put a new ripple on an old trick – which is always a pleasant surprise. Simple as the trick may be.

Sadly, I have to report that the best portions of The Double Alibi are found in its opening and closing chapters, which lay the groundwork for the plot and tied everything together, but the middle section was disappointingly dull and largely uninteresting. Even Allou became bored with the whole case! Evidently, Vindry had a pretty good idea for a ticklish, intricate detective story and knew how he was going to explain it all, which is probably why the opening and ending completely outshined everything in between. I don't think Vindry had as clear an idea as to how he was going to fill the chapters bridging those two points and mainly had his detectives chasing after the elusive Allevaire. Unfortunately, this slightly affected the overall quality and fair play aspect of the plot resulting in a solution that was not as neat or tight as it could have been. JJ pointed out some of the imperfections in his own review, which really are a shame, because Vindry clearly tried to play as fair as possible.

Personally, I think these shortcomings could have been solved had The Double Alibi been shortened to a novella or simply a short story. This short story or novella could have been to Vindry's body of work what "All in a Maze" (collected in The Men Who Explained Miracles, 1963) was to Carr's locked room output (i.e. a solid detective tale with a good, if minor, impossibility).

Anyway, I would place The Double Alibi above The House That Kills, but far below the excellent The Howling Beast and can only really recommend it to ardent locked room readers who want to explore every nook and cranny of the impossible crime story. So, once again, I have to disagree with JJ, because The Double Alibi is not the most twisty detective novel Pugmire peddled across the language barrier.

Well, I didn't get the excellently plotted, original and solidly clued detective story I was looking for, which tempted me to pick up a Christopher Bush mystery for my next read, but decided to re-read a classic instead. One that'll probably surprise some of you. But before that, I might make a stopover in the wonderful world in Detective Conan. So don't you dare to touch that dial!
Geplaatst door TomCat on 5/06/2018