Back in January, I read Jernvognen (The Iron Chariot, 1909) by "Stein Riverton," a pseudonym of Sven Elvestad, who can be described as the Norwegian Conan Doyle and his work helped the detective story gain a foothold in his country – an important contribution punctuated by an annual award, Rivertonprisen (Riverton Prize), named in his honor. The Iron Chariot was published in a dozen different languages, but an English edition did not appear until 2017. A 108 years after its original publication in Norway! 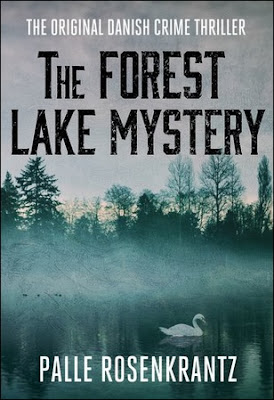 An independent e-publisher, The Abandoned Bookshop, dedicated to uncovering "the best books we've forgotten, lost sight of, or never even knew existed in the first place" finally introduced Riverton's celebrated detective novel to a world-wide audience. Scott Pack of The Abandoned Bookshop left a comment on my review that a translation of "one of the first ever Danish crime novels" was in the works and scheduled for publication later this year. Well, that book was actually published in late February and is going to be subject of today's review.

Baron Palle Rosenkrantz was a lawyer with "expensive house-building habits" with "a reputation for unauthorized use of public funds," which resulted in an arrest record and bankruptcy, but he turned his life around when he began to work as a journalist and write fiction in order to keep the wolves from his door – producing stage plays, silent movie scripts and close to eighty novels. An unusual career path somewhat similar to that of two of his fellow mystery writers, Henry Leverage and Robin Forsythe.

An early work by Rosenkrantz, Hvad skovsøen gemte (The Forest Lake Mystery, 1903), is generally accepted as Denmark's first mystery novel and the fact that he was the first made him, ipso facto, the "godfather of Danish crime." The Danske Kriminalakademi (Danish Crime Academy) named their annual Palle Rosenkrantz Prize after him.

So The Forest Lake Mystery is a landmark mystery novel and earned Rosenkrantz ever-lasting fame in Denmark, but how does the story measure up to its more well-known, internationally acclaimed contemporaries?

Well, the answer to that question wholly depends on what the individual reader considers to be good crime-fiction from the days before the genre's Golden Age.

Riverton's The Iron Chariot obviously took its cue from Sir Arthur Conan Doyle and read like a sultry, summer-like take on The Hound of the Baskervilles (1902), while Rosenkrantz's The Forest Lake Mystery followed the lead of Fergus Hume's The Mystery of a Hansom Cab (1886) and reads like a modern crime novel – emphasizing character and story-telling over plotting and clueing. So, as a plot-oriented mystery reader with an undying love for intricate plots, clueing and red herrings, I was slightly less enthusiastic about this second translation from The Abandoned Bookshop. But let's begin at the beginning.

The protagonist of The Forest Lake Mystery is a promising, twenty-six year old sergeant with the Copenhagen police, named Eigil Holst, who was in need of fresh air and decided to take a holiday into the countryside.

Holst is has reclusive personality and would sit for hours, alone with his thoughts, by a small marl pit on the edge of the forest and staring down into a small, dark lake. One day, Holst's solitude is breached by a Swedish gentleman, Arvid von Ankerkrone, who served as a Captain with Scania Dragoons and is accompanied by his daughter, Miss Ulla – who'll fulfill the role of love-interest for the young detective. However, during their time together, two gruesome discoveries are made in the lonely forest lake.

The body of a murdered infant, looking like a mummy, is floating near the bank of the lake and subsequent dragging reveals the body of a naked woman. A pair of short, strong ropes were tied around her feet and neck with a heavy stone fastened to it. The postmortem reveals she had been poisoned before being sunk to the bottom.

Holst is entrusted with handling the case, but his investigation doesn't focus on how the murder was committed or even who responsible. Not directly. The investigation is largely concerned with identifying the victim and reconstructing her life, which means that Holst has to follow an obscure, scattered trail that cuts across the mainland of Europe – from Denmark to Sweden and Italy and back again to Denmark. Only to find out, like the reader did early on, that the truth to the case had been within arm reach the entire time.

Admittedly, this part of the story, after the excellent opening chapters, were not badly written and the depiction of Europe during the first decade of the previous century has its charm, but my interest in the plot slowly began to wane after the halfway mark. And pretty much evaporated after the only lengthy chapter in the book that went over a whole stack of letters, notes and diary entrees. The story had obviously run its course by that point, but there was still a quarter of the book left to go and rattled on to an underwhelming, unimpressive ending. And there's one plot-thread I did not entirely understand, regarding the dead baby, but perhaps I missed something halfway through the story.

Anyway, I wish I could be as positive about The Forest Lake Mystery as I was about The Iron Chariot, because I want The Abandoned Bookshop to do more of these obscure translations, but this one simply didn't do it for me. Historically, it's an interesting title, as it's an ancestor of the modern-day, Scandinavian crime novel, but I'm a hopeless classicist whose taste runs in a very different direction.

So you have to keep that in mind, because most of you will probably be able to appreciate The Forest Lake Mystery more than I have.
Geplaatst door TomCat on 5/01/2018