Baynard Kendrick was an American mystery novelist and the spiritual father of the most influential of all blind detectives, Captain Duncan Maclain, who lost his eyesight in World War I and forced him to rigorously train his remaining senses to pull double duty – unwittingly becoming a member of the ancient Pythagorean sect whose adherents "considered numbers the supreme concept of existence." The universe is "an orderly composition of geometric figures" to Captain Maclain and geometry governed his movement aided by a sharpened hearing that can make "a map of sound" in his clear, uncluttered mind. This allowed him to become one of the best private investigators in New York City as he sees things other people tend to overlook. 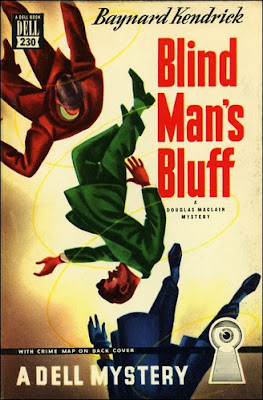 Captain Duncan Maclain is also somewhat of an anomalous character within the American detective story. A character who connects the traditional detective to the heroes from the pulp magazines and comic books. Captain Maclain's office building is crammed with high-tech gadgets and the building has a subbasement, four floors below street level, which serves as a Batcave. He trains there with his assistant, Spud Savage, whose wife, Rena, acts as his secretary. Captain Maclain also has two German shepherds, Schnuke and Driest, who each played a very different role in his life. Schnuke was trained as a capable, lovable and gentle guide who clung to her master with "a loyalty deeper than death." Driest is a weapon trained to defend and "looked upon the world with a hostile, suspicious canine eye" ready to hurl himself at any adversary at command or suspicious movement. Basically a sentient, medieval spiked mace with fur and a plucky attitude.

So no wonder Captain Maclain served as a model for some other blind characters, such as the blind insurance investigator from the 1970s TV-series Longstreet, Mike Longstreet, but, more importantly, Stan Lee cited Captain Maclain as the model for Matt Murdock – a blind defense attorney better known as Daredevil. Lee stated that he wanted to create "a hero who would start out with a disability" and remembered reading Kendrick's mystery novels about his blind detective years ago, which made him reflect that "if a man without sight could be a successful detective" what "a triumph it would be to make a blind man a comicbook superhero."

I've never understood why Kendrick and Captain Maclain never fully reemerged from the shadows as the character not only has a fascinating backstory and linage, but Kendrick was a consistent writer and plotter. He never used Maclain's blindness as a gimmicked crutch for his plots to lean on, which are either solidly plotted affairs (The Whistling Hangman, 1937) or interesting, pulp-style hybrids (The Odor of Violets, 1940). Kendrick regularly applies his skills to the impossible crime and how-dun-its. The subject of today's review has a strong hint of John Dickson Carr. 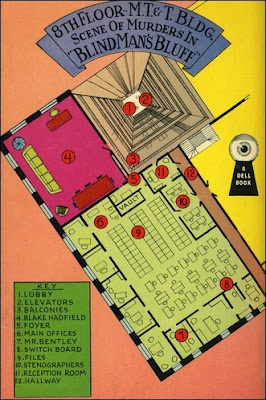 Blind Man's Bluff (1943) is the fourth entry in the Captain Duncan Maclain series and confronts the blind detective with a string of seemingly impossible crimes rooted in the fairly recent past.

Blake Hadfield had served as the President of the Miners Title and Trust Company during the most opulent years of the once successful bank and real estate mortgage company, until the company horribly crashed in 1932, but was personally cleared of any criminal negligence – a charge which the State Insurance Department tried "industriously to prove." But there was still a tragedy waiting in the wings. James Sprague, a ruined depositor, "had taken matters into his own hands and tried to settle accounts with a gun." Sprague shot Hadfield through the head in his office at the M.T. & T building before turning the gun on himself, but the bullet had failed to kill Hadfield. However, it left him completely blind and somewhat isolated. Hadfield lived separate from his wife, Julia, who tried to divorce him, but he fought it successfully in court. Because he knew she one day would want to marry her lawyer and family friend, Philip Courtney. So, for the past few years, Julia scraped and struggled to put their son, Seth, through school and college to show she didn't need her husband. Lieutenant Seth Hadfield, home on a short leave from the army, is engaged to Sprague's daughter, Elise, who worries that her father's attempted murder and suicide will cloud her future with Seth in "an unhappy pall."

So a relatively normal and functioning family by detective story standards, but it's weird that, one day, Hadfield decides to take his son back to the M.T. & T building and summoned several people to join them.

M.T. & T building is a large, gloomy and ponderous structure from the 1890s resembling a prison from that era and, while largely abandoned, is still partially in use by the company's appointed Comptroller, Carl Bentley, who tries to sell the real estate which M.T. & T took over in foreclosed mortgages. Trying to salvage all he can for the investors who lost their money with Elise Sprague acting as his secretary. So the sudden return of Blake Hadfield to his office placed his defunct company back into "unwelcome notoriety" of newspaper headlines as his body was hurled from his office floor to the lobby eight floors below. Just at the moment his wife arrived. Only person with him was his son (boozed out of his mind) and the night watchman has "an unshatterable record of his movement punched every five minutes from the time he started his rounds." So the police find it impossible to present a convincing murder case and the now supposed accident/suicide finds its way to the blind detective, Captain Duncan Maclain. 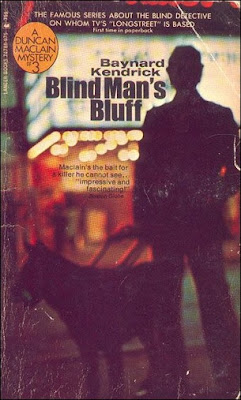 Captain Maclain is approached by Harold Lawson, of the State Insurance Department, and a friend of the victim, Miss Sybella Ford, whose company redecorated his apartment after he lost his sight. Neither of them believe his son threw him over the railing and ask Captain Maclain to look at Hadfield's strange death "through a blind man's eye," but the case becomes increasingly complicated when the apparently nonsensical clues and bodies begin to pile up.

A sleazy, ambulance chasing lawyer, named T. Allen Doxenby, attempts to subtly blackmail Courtney into "helping" him handle the Hadfield estate, but he's unceremoniously shown the door and, shortly thereafter, he jumped out of a window – or so it appeared. A man and his wife who live in the apartment opposite of Doxenby heard him scream when they arrived home and stood in front of the door until the janitor opened it, but "there was nobody in the room but an open window." So, if it was murder, the police should "get out a warrant for Superman." There is, however, a curious piece of evidence linking Doxenby to the Hadfield-Sprague shooting years earlier. An initialed, custom-made highball glass that went missing from the office at the night of the shooting and is found in Doxenby's apartment "signed with the fingerprints of two dead men." This is not the last murder or even the first two murders as there might have been a third person who shot both Sprague and Hadfield. This time, Captain Maclain is seriously hampered in his investigation as the war deprived him of Spud Savage, but, even more dangerously, he has fallen in love with Sybella Ford. A briefly appearing Spud (on leave) warns him "the brain of a man in love is never quite crystal-clear," especially to a man who loved by his brain and hadn't experienced love in ages, which might prove lethal when "playing with a killer who has stood the Police Department on its ear."

Captain Maclain not only needs a clear and uncluttered mind to tangle with a very dangerous and clever killer, but also to make sense of wild array of strange, seemingly intelligible clues. Such as a misplaced ball of twine. A bottle of good whiskey thrown down an air shaft. A missing fountain pen and small change. A lowered Venetian blind and a vanished paperweight. A hallucination of someone falling down an elevator shaft. A smashed braille wristwatch and a heavy round watchman's clock that the watchman carried on his rounds. So, yes, there's a definite touch of Carr to the plotting and clueing recalling The Case of the Constant Suicides (1941) and Carr's dark obsession with timepieces.

However, Blind Man's Bluff is a Carr-style novel in the way Christopher Bush's The Case of the Chinese Gong (1935) is a Carr-like impossible crime novel. The Case of the Chinese Gong and Blind Man's Bluff both have an impossible crime as the central puzzle full of Carrian ingenuity and worthy of Dr. Gideon Fell, but Bush and Kendrick lacked the master's showmanship and magical touch when it came to the solution. Bush took the humdrum approach of John Rhode and Kendrick showed his pulp credentials by letting Maclain set a trap with himself as bait, which went about as well as you would expect. Not that the more pulp-style ending took anything away from Blind Man's Bluff as a cleverly contrived, mostly fair play and not unoriginal impossible crime novel with the spotty clueing, regarding the question of opportunity, standing as the plots only real weak spot – which is why it's only almost as good as The Whistling Hangman. Needless to say, I thoroughly enjoyed Blind Man's Bluff as a well written and plotted specimen of the American Golden Age detective story helmed by a detective who deserves more recognition by today's mystery readers.