"Anthony Abbot" was the pseudonym of Charles Fulton Oursler, an American journalist, editor, playwright and writer, who Mike Grost rightfully called "one of the most of the "little known" mystery writers" and, like Ellery Queen, "an early follower of S.S. van Dine" – distinguishing himself by presenting the traditional Van Dine-Queen detective story as a modern police procedural. The detective in Abbo's detective novel is not an amateur dilettante with police connections, but the Police Commissioner of Greater New York, Thatcher Colt. A well tailored policeman who resorted "to no magic except applied intelligence" and "relying invariably on strict police practice" with the invaluable cooperation of "scientists and their laboratories." 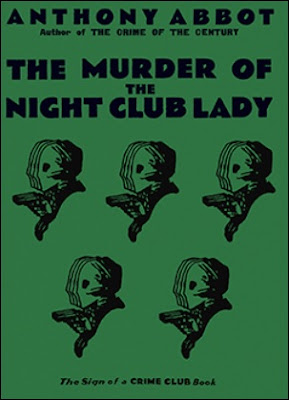 So take Abbot's interest in the latest, cutting-edge police techniques and his skillful handling of  intricate, maze-like plots with a penchant for misdirection, you can understand why so many consider him as one of the more important American mystery novelists of the 1930s. Despite his credentials, Abbot's work has been out-of-print since the fifties. You really need a bit of luck to find reasonably priced copies, especially those from the early thirties.

During the past year, I was lucky enough to come across two novels and a short story, "About the Disappearance of Agatha King" (1932) and About the Murder of the Circus Queen (1932), which were both glittering examples of the Golden Age detective story – demonstrating a deft hand at both clueing and misdirection. Recently, I got my hands on a cheap, hardcover copy of About the Murder of the Night Club Lady (1931) in poor condition, but still perfectly readable. A novel that came with the warning that the story showed far less of the colorful storytelling and imaginative plotting than "the best of Abbot's writing," but has "an original impossible crime" as its central puzzle and "this impossibility is the best part of this work." There's actually a second impossibility that's even better!

Firstly, I need to point out that About the Murder of the Night Club Lady strongly reminded me of the detective novels of another little-known writer of the Van Dine-Queen School, Roger Scarlett. Scarlett's Murder Among the Angells (1932) helped shape the Japanese yakata-mono (mansion story) mystery and this novel can be categorized as one with most of the action taking place in the Night Club Lady's spacious penthouse on the twenty-second floor of a New York skyscraper. More on that in a moment.

About the Murder of the Night Club Lady opens in the Crystal Room of the Ritz, on New Year's Eve, where the District Attorney, Merle Dougherty, has summoned Thatcher Colt and Tony Abbot to discreetly discuss "a highly secret criminal investigation" he has been personally conducting. Something the Police Commissioner not wholly approves of ("the functions of police of the police were too often usurped by the District Attorneys"), but Doughtery apparently discovered a breakthrough in a string of jewel robberies. The D.A. believes the thieves are in cahoots with somebody "who hob-nobs with the swells and plans the jobs." Someone who freely moves around the upper-crust of New York City. Doughterty believes the higher-up is no less a figure than the Night Club Lady.

Lola Carewe is "the most mysterious woman in New York," a "dangerous beauty" better known as the Night Club Lady, who got her break as a cinema performer and became a widow a year after her sensational marriage to a cotton millionaire, Gaylord Gifford – who barely left enough money to pay the undertaker. Yet, she continues to live in luxury and spend money like water. Doughtery wanted to meet Colt at the Crystal Room to get a close-up look of the famous Night Club Lady, but they are in for a surprise! Lola arrives at the Ritz in the company of Vincent Rowland, a well-known, sharp-eyed railroad attorney, who "loved to play Crœsus to modern young painters." The three men observe the two having "a spirited discussion" as Lola scribbles a note, which is passed to their table. Lola wanted to talk serious police business with Colt.

A week ago, Lola's dog unexpectedly died and the day before her parrot died under similar circumstances, which is to say that the animal hospital were unable to determine the cause of death. They could "find no trace of any poison at all." Only an hour ago, she received a threatening letter promising she was going to die before three o'clock that night. 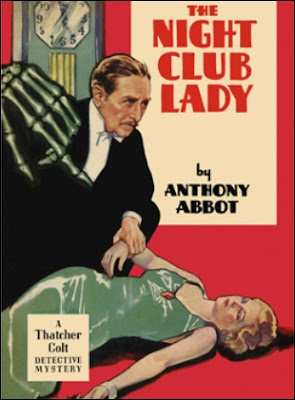 Colt dispatches several detectives to the top floor penthouse on East Fifty-Eighth Street, "an aerie perched high in the New York skyline like the nest of some predatory bird," which Lola shares with several other people. There's her elderly mother, Mrs. Carewe. A close friend of Lola, Christine Quires, who has been living with them for the past few months. They employ a Chinese butler, Chung Wong Duk, whose backstory, as an Oxford educated "civilian observer" in the service of his government, could very well have served as the model for one of C. Daly King best characters, Katoh – who's the Japanese valet/spy of King's gentleman detective, Philip Tarrant (The Complete Curious Mr. Tarrant, 2003). Lastly, there's the maid, Eunice James, who has done a bit of domestic spying herself. So, when the police arrives, all the rooms are thoroughly searched and guards posted at every door and window "except the ones that open on a sheer drop to the street." The terrace and rooftop were not overlooked or left unguarded. Everything appears to be secure, but an unguarded moment of carelessness proved fatal.

Lola says she's going to get her cigarette case from the guest-room, ignoring Colt's warning not to go in alone, but, before anyone could go with her, she went inside. Almost immediately followed by piercing scream and the sound of a body falling to the floor. What they find inside is a dying Lola, "contorted almost into the form of a question mark," but without a single suspicious mark or scratch on her body. And she was all alone in the room.

So the entire New York police apparatus is put into motion and "a corps of specialists was being organized and dispatched to the scene," which range from the Medical Examiner and police photographers to the Captain of the local precinct. Detectives who arrived from Headquarters began to search the penthouse again, while others were dispatched to delve into the past histories of persons considered important or check out alibis, but this is merely background chatter compared to a few genuinely interesting pieces of early forensic detective work. Firstly, two young detectives arrive from Centre Street arrive at the penthouse with a special vacuum cleaner and meticulously go over the guest-room collecting "every particle of dust in the room where the crime had been done," which may contain, "somewhere in the multitudes of particles," the vital clue to puzzle. The vacuum cleaner bags and the victim's clothing are send to a retired scientist, Professor George Luckner, who's "at heart a great detective," but "regards detective work as degrading to a scientist" and devotes himself to criminal research only as a special favor to Colt. And he does find the key-clue. Secondly, Colt is very interested in a photograph of a young Frenchman and has it sent to the Paris police by telephoto (wirephoto). A still very new, time consuming and expensive technology that were large machines and required a untied telephone line. The reader gets a brief description of how it exactly works. I love finding these little time-capsules in my vintage detective stories!

While his men doggedly pursue every lead, Colt has to try and make sense out of such bizarre clues as a wrongly-buttoned bathrobe, a small, unpainted wooden box and a missing suspect who was seen by the elevator boy returning to the penthouse – except this person is nowhere to be found. What happened? There are also two outsiders who have to be considered. Lola's former physician, Dr. Hugh Baldwin, was called to her bedside when she was dying and told the police she had a history of heart trouble. But they apparently had a falling out. Guy Everett is a young actor who escorted Christine Quires that evening to a New Year's party, but he also might have had a motive. And his speakeasy alibi is very shaky. But the case becomes even deeper and more perplexing when a second impossibility occurs inside the closely watched and guarded penthouse. Practically under the nose of the police! 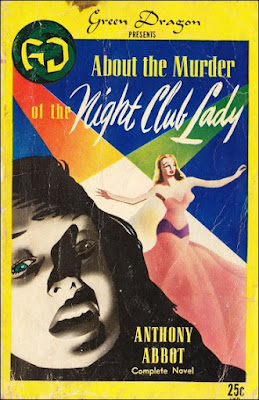 A body miraculously appeared in the boudoir, twisted and contorted like a question mark, but, this time, there are terrible welts on the throat. However, the doctor tells Colt that those monstrous marks were put on the victim's throat after death. Not to mention the problem of the body materializing out of thin air in a previously thoroughly searched, closely guarded premise.

So how well does About the Murder of the Night Club Lady stack up as an impossible crime novel? Pretty well, actually, but with some minor qualifications. I don't think many readers today will be too impressed with "the instrumentality of death" as it seems more suited to a pulp thriller instead of a traditional detective story. Abbot used it expertly and smartly didn't wait until the very with revealing how death was delivered. Apparently, it might have actually been employed in a real-life murder as Colt references "the Falk case in Vienna" and mentioned their killer might have knowledge of that case, but the wise, all-knowing internet was unable to find anything. So no idea if this trick was inspired by a real murder case. The impossible appearance of the body in the boudoir is shockingly brilliant! I sort of figured out how it must have been, but that took nothing away from it and added a delightful, creepy afterthought to everything that had previously happened at the penthouse. Very fitting for a Japanese-style mansion story!

About the Murder of the Night Club Lady is arguably even better as a whodunit with Abbot demonstrating the skillful agility of a practiced card mechanic when dealing the reader their clues and red herrings. Abbot beautifully hid his murderer among a small cast of characters, but giving the reader enough clues, hints and tells to spot this person before arriving at the explanation. And, if there's anything to complain or nitpick about, it's Abbot wasting a brilliant and daring clue. Had he told the reader the name of the dance early on in the story, I would have stood up to applaud his guts and cunning as a mystery novelist. Nevertheless... About the Murder of the Night Club Lady is a very game, boldly executed 1930s detective novel crammed with inexplicable death, impossible situations, strange clues and treacherous red herrings in camouflage. Not every aspect of the plot has aged particularly gracefully, but the pleasingly complex plot retained enough of its radiant, Golden Age ingenuity to make it a worthwhile recommendation.