The Murder of Nora Winters (2016) by Robert Trainor

Robert Trainor's The Murder of Nora Winters (2016), the subject of today's review, was recommended by "JJ," of The Invisible Event, who discussed the book back in 2018 as part of his "Adventures in Self-Publishing" blog-series – calling it "an imperfect but extremely game swing at the toughest task going." With December being just around the corner, I wanted to return to the seasonal detective story as I neglected them last year. The spirit of Christmas looked too much like the specter at the feast in 2020 which ruined the mood. So let's see what can be done about that in 2021!

Trainor is an independent, self-published author whose "novels are very dissimilar from one another and have all sorts of different plots, themes and attitudes." Covering everything from love stories, Gothic tales and fantasy to courtroom dramas and a locked room mystery! 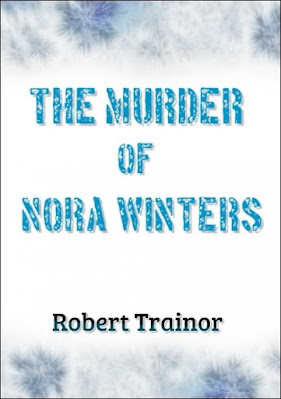 The Murder of Nora Winters has, as to be expected from most self-published mysteries, some rough, unpolished patches that left plenty of room for improvement, but three things make the book standout with two being (minor) triumphs. First thing that stood out to me occurred in the first chapter that interestingly updated the type of characters who traditionally populate these Christmas family party mysteries.

The story opens on Christmas Eve in the large, ramshackle house of Chad and Nora Winters, in Connecticut, where the whole family has gathered for the first time in five years, but the Winters are a modern dysfunctional family – each burdened by their own and each others various problems. Nora is diagnosed with acute schizophrenia and her symptoms, "an increasing tendency to isolate oneself and an irrational anger or fear directed toward loved ones," worsened when she stopped taking her medication. She's openly hostile to her own children, but in particular to her husband. Chad is a yes-man who "always bent over backwards to please her," but nothing seemed to please her and he sought refuge in an affair. Nora found out about his "little indiscretion" and she moved out of their shared bedroom to a now fortified guest-room. Ken is the oldest son and has been borrowing money from his father to expand his travel agency, which his mother wants to put a stop to during Christmas. She calls him a sponger and "a sexual cripple." Eileen is the oldest daughter and moved to Oregon where she secretly lives with her girlfriend, but her mother figured it out, lost her mind and the ensuing row nearly fractured the family. Jimmy is a 15-year-old teenager who keeps to himself in his room playing video games, listening to grunge rock on max and secretly smoking weed by an open window. Alyssa is the youngest daughter and a good-looking, straight A student who assured her parents she knew how to fend-off boys and looked forward to college, but her younger brother calls her "a little con artist." Jim prophesies to his father that, one of these days, "she's going to slip up, and when she does, you and Mom are going to go crazy."

Unsurprisingly, the Christmas gathering begins to deteriorate with arguments, stuff getting smashed, suicide threats and Nora being told that the best present she could give her family that year is terminal cancer. Chad flees the situation to visit his parents, but things go from bad to worse back home.

A now gin soaked, "totally bombed," Nora discovers a boy in Alyssa's bedroom and actually fired two shots into the room, which brought the other children to the corridor who witnessed a naked boy bolting down the stairs as Nora tossed his clothes out of Alyssa's bedroom window – before retreating to her fortified bedroom. So they called their father who immediately returned, packed three of them off to a motel and decided to wait until morning to deal with the situation. But the next day, Nora doesn't come out of her bedroom or gives any sign of life. Chad uses a ladder to look through her bedroom window and saw her body lying in front of the dressing table with a lot of blood.

She had been shot in the right temple at very close range and everything appears to indicate suicide. The bedroom door is two-inch thick, solid oak wood secured with two sliding-bolts and a keypad operated dead-bolt, which were all securely in place. The locks on the window "were probably as old as the house," slightly rusted and difficult to turn, which were all securely locked from the inside. So, apparently, Nora has committed suicide, but "the very puzzling position of the gun" proves it was murder. 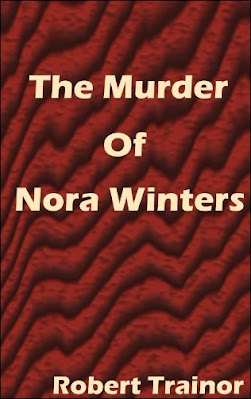 Detective Nick Slater, of the Framingham Police Department, has to figure out why a murderer would "go to the trouble of mysteriously exiting a room and yet leave a very telltale sign that he had been there," because "the placement of the gun and the locked room" didn't go together. A neatly posed impossible crime puzzle with "Chapter 7: Nick Slater's Report" reading like a dressed down locked room lecture. Slater reports to his superior how went over the crime scene with a fine tooth-comb as he experimented and eliminated every possible trick that could been used to enter, or exit, the room without leaving it unlocked. A very enjoyable chapter, if you're fond of impossible crime fiction.

A breakthrough happens when Slater has a flash of inspiration and googles "solutions to locked-room mysteries" with "practically at the top of the page" something that had never occurred to him. Something that suddenly revealed some very incriminating evidence against one of the family members and the police makes an arrest, which briefly turns the story into a full-blown courtroom drama. There's an excellent piece of courtroom wizardry (i.e. Perry Mason-style shenanigans) leading up to an unexpected twist and an original play on the false-solution gambit! Not that the game was played entirely fair with the reader, but kind of loved how the false-solution was put to use here. Yes, it's the second thing that makes this self-published mystery novel standout.

There are, however, some very rough patches and in particular the long, repetitive and sometimes confusing descriptions of Nora's bedroom. Jim is right that these descriptive passages slowed the story down to a crawl and this could have easily been fixed with a diagram. A detailed diagram would have allowed the descriptions to be whittled down to a bare minimum, creating some much needed space to reinforce the plot (like the clueing), but, more importantly, it would have handed Trainor an opportunity to make the payoff to that false-solution ever better – by propping it up with another false-solution. You have to excuse me as I play armchair plotter for a second (ROT13): Fyngre fubhyq unir tbggra gur vqrn sbe uvf snyfr-fbyhgvba sebz n pbyyrnthr, yvxr Zngg be Wnavpr, jub fubhyq unir fhttrfgrq gung gur zheqrere onaxrq ba gur snpg gung onggrevat qbja gur orqebbz qbbe jnf gbb zhpu jbex naq znavchyngrq gur cbyvpr gb qrfgebl rivqrapr ol oernxvat n gnzcrerq jvaqbj – yvxr n zntvpvna sbepvat n pneq. Guvf vf, bs pbhefr, cebira jebat, ohg tvirf Fyngre na vqrn. Guvf unf gur nqqrq orarsvg bs gur svefg snyfr-fbyhgvba fbhaqvat orggre guna frpbaq, fhccbfrqyl pbeerpg naq zhpu zber zhaqnar snyfr-fbyhgvba. Bayl gb unir vg qrzbyvfurq va gur zbfg uhzvyvngvat jnl vzntvanoyr qhevat gur gevny. I think even Jim would agree that it would elevated the book a little above a very game swing at the traditional detective story with a locked room puzzle.

So we arrive at the ending of the story and, once again, the story shifts gears a third time with the introduction of an unexpected detective, Miss Irene Knight, who strongly reminded me of Kay Cleaver Strahan's Lynn MacDonald. She appears like a deus ex machina to explain "something that an eight-year-old could solve in eight minutes." Solution to the whole locked room-puzzle is the third standout of the story. Normally, I'm not a big fan of this type of locked room-trick as it's too often used as a cop out solution to get out of a locked room and destroying it in the process. I can count the stories that used it correctly on one hand and you can count The Murder of Nora Winters among them. Not only did the solution left the locked room principle in tact, but added a twist (ROT13) ol erirnyvat gur ybpxrq ebbz ceboyrz npghnyyl pbaprearq gur cbfvgvba bs gur tha. Only things holding the book back is the shoddy clueing and the overly descriptive, sometimes even sloppy writing (e.g. Nick suddenly being called Luke). Nothing that can't be fine-tuned with a little polish and some rewriting.

The Murder of Nora Winters certainly stands out as a self-published locked room mystery, despite some of its obvious imperfections, but perhaps even more impressive is that it was likely written by an outsider. I don't think Trainor is a devout reader of impossible crime fiction and suspect he got the idea for the false-solution by actually googling "solutions for locked-room mysteries." That would be an amazing piece of genre awareness compared to some of his self-published colleagues. Just read Jim's review of Steve Levi's The Matter of the Duct Tape Tuxedo (2019) and don't skip the comments. So, yeah, I very much enjoyed my time with this interesting and spirited piece of amateur detective fiction.

A note for the curious: I slapped together the first cover in a few minutes, because the official cover is an atrocity on the eyes.