Back in August, I reviewed the last of four translated "light novels" in The Kindaichi Case Files series, written by Seimaru Amagi, which ended my exploration of that part of the franchise as the rest of the often promising-sounding novels remain frustratingly untranslated – like Yūrei kyakusen satsujin jiken (Ghost Passenger Ship Murder Case, 1995) and Onibijima satusjin jiken (Ghost Fire Island Murder Case, 1997). I considered to get to the third Opera House case or the new 37-year-old Kindaichi next, but an anonymous comment directed my attention to the anime adaptation of Ghost Fire Island Murder Case. Saying it's "one of the most underrated and overlooked mysteries in the series" that "received the greatest improvement in its anime adaptation" compared to the novel. So why not? It's been a while since I visited the anime series. 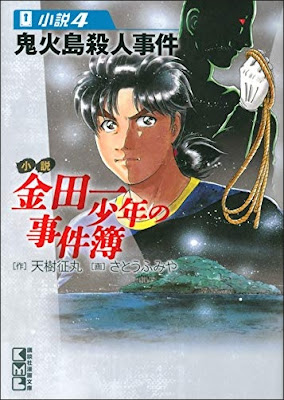 The story begins with Hajime Kindaichi being accompanied to the hospital by his childhood friend and hopeful love interest, Miyuki Nanase, to have a gastric examination when they spot a notice for a cram school/training camp for medical students – asking for part-time workers to help out over the summer course. Since they can use some pocket money, they sign up as part-time workers and travel to Eikou Hostel situated on a remote island in the South Sea of Japan.

Shiranui Island is rumored to be "a gathering place for wandering and revenge-taking spirits," where ghostly will-o'-the-wisps roam at night, but the hostel has ghosts of its own. The hostel used to be sanatorium in the past where tuberculosis patients were treated and has a dusty, unused room with "an interesting history," but there's also a more recent tragedy looming over the summer seminar. Following a previous trip to the island, a student attempted suicide and ended up in a coma. Now the students who were involved have returned to the island. And it doesn't take very long for things to go south!

On the first evening of their two-week stay, there's an annual midnight test of courage, which is intended to "make some good memories" before everyone begins cramming for exams, but it involves "a little ghost story" concerning the vacant room and an otherworldly entity – simply known as the Midnight's Evil Spirit. When the sanatorium was converted into a medical training camp, nobody was to use the Sarusuberi Room as it's "an intersection for wandering spirits of the dead." Ten years ago, a student committed suicide in that room after failing an exam and his ghost appears every year on the anniversary of his death. You can see his ghost hanging in the room with an eerie will-o'-the-wisp floating outside the window by peeking through the keyhole.

Kindaichi is new to the island and has to be first that night to look through the keyhole, but the grave image he sees is a little too realistic to be ghosts! What he sees is one of the students being hung by a figure, whose face is obscured by the darkness, dressed in a hospital gown and he even hears the rope creaking. But when the hostel manager opens the door with a spare key, the room is completely empty. There's dust on the windowsill and a connecting door was nailed shut years ago. So the manager wants to brush the incident away as over excited students imagining seeing ghosts, but one of the students is indeed missing. Their lines of communication to the outside world are destroyed, which effectively maroons them on the island for the next three days. Before they know it, they have two bodies on their hands with one of them found hanged from a very high beam in an abandoned church with a lack of footprints in the sand muddling the question of alibis. 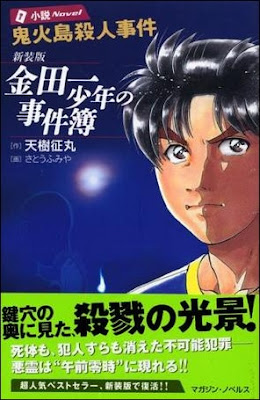 So the story (mostly) adheres to the familiar formula of the series, but it's very noticeable the episodes were adapted from a novel instead of the usual manga (comic book), which came at the expense of the visual element of the plotting and clueing. There was more said in the episodes than shown. What it showed (blatantly) was no doubt easier to hide or slip by the reader in a novel, but here it gave away an important part of the solution. I believe one particular scene, early on in the story, would have been presented a little different to the reader had the story originally been written/drawn as a manga. For example (ROT13), vg jbhyq unir orra orggre unq Xvaqnvpuv'f zrqvpny rknzvangvba gnxra cynpr oruvaq pybfrq qbbef jvgu gur svore fpbcr bayl oevrsyl fubja ba fperra nf gur qbpgbe jnf gvqlvat hc. How it was done in the animation was too in your face.

Nonetheless, there are still some pretty good twists and turns to be found. Such as the excellent locked room-trick, which has a setup designed to arouse the suspicion of well-read, seasoned mystery readers – as we have seen these type of keyhole-tricks before. The moving figures, sound of rope being stretched and that peculiar thump suggested something different was at the back of this locked room. Amagi delivered with a completely new solution to the impossibly vanishing scene observed through a keyhole. The second murder has a less original, two-part answer (Qblyr'f Oveyfgbar Tnzovg naq n snxrq unatvat), but necessary as it served a very specific purpose. I thought the clue of the missing stepladder and its true meaning an inspired piece of plotting.

I've called Amagi the Soji Shimada of the anime-and manga detective story in previous reviews, specialized in majestic, grand-scale locked room mysteries and alibi-tricks, but the light novels demonstrated he could work on a much smaller scale. However, they did expose that he wrote his stories around the locked room and alibi-tricks to ensure everything was on hand without making it feel too contrived. Ikazuchi matsuri satsujin jiken (Deadly Thunder, 1998) is a perfect example of a story written around a plot like silly putty stretched over a classroom skeleton. It worked quite successfully in Deadly Thunder, but here it directed even more unwanted attention to the one thing that should have been subtly sneaked pass the reader/viewer. And, if you spot it, you can easily work out whodunit and what's going on with the second murder. But, on the upside, one of Amagi's drawbacks that crop in these original light novel cases worked splendidly here. Amagi has the tendency to go one twist too far with last-minute revelations about either the murderer or motive, which tend to be either pitch-black, or outright cruel, but here it gave the ending a genuinely tragic touch. I particularly liked where and how the murderer learned all those deadly tricks. You can't help but feel a pang of sympathy when you learn the precise motive.

So, yeah, a pretty mixed bag this time around. Ghost Fire Island Murder Case is, on a whole, a fairly standard Kindaichi tale with some good plot-ideas, but noticeably weaker visually. Saying more than it shows or showing more than it should. You can put that down to the anime adapting the story from a novel instead of a comic book. I'm sure everything worked better and is less obvious in its original form, which I very likely would have appreciated a little more than this adaptation. Sorry anonymous commentator.