Leonard Gribble was a founding member of the British Crime Writers' Association and a prolific writer of detective and thriller fiction, best remembered today for The Arsenal Stadium Mystery (1939), who occasionally dabbled in Westerns and non-fiction – employing a whole retinue of pennames. Sometimes a penname can get lost in the crowd and be overlooked. 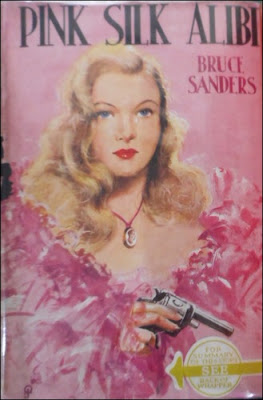 This seems to be the case with one of Gribble's lesser-known pseudonyms, namely "Bruce Sanders," which is not listed on his GADWiki page, but appeared on the covers of a dozen novels. The Bruce Sanders Library comprises of four novels in the Ward and Sally Digburn spy-series, three presumably non-series titles and a handful so-called "colour crime" novels. A series of standalone stories linked together by their color-themed book titles, which seem to cast Bruce Sanders as a quasi-true crime writer who fictionalizes sensational and headline grabbing murder cases. Appearing as a character in the prologues and epilogues to setup the plot and tidy up the loose ends.

Some time ago, I came across a cheap copy of the third "colour crime" novel, Pink Silk Alibi (1946), but assumed Sanders was one of those unknown, completely forgotten authors. Just like the time I stumbled over John Hymers. I began to seriously look into him while reading the book and only then figured out the man behind the name was not that obscure at all. Funnily enough, Aidan, of Mysteries Ahoy!, had a similar experience with the final "colour crime" novel, Madame Bluebeard (1951).

The prologue of Pink Sink Alibi opens with Bruce Sanders "looking around for the right kind of material" with "a certain pattern" and human interest, some meat and fascinating background – which is handed to him at the Press Club. Peter Meehan, of the Balance Sheet, has in his possession a manuscript with the full, unedited truth about a sensational, big money murder case. A case that had slowly fizzled out due to a lack of developments. So the time was ripe to finally tell the public the full story. However, you're advised to skip the last line on page 7 ("the whole thing had fizzled out, as it seemed, when [REDACTED] was killed in the Paris boat-train smash") as it gives away in which direction to look for the murderer. The reader has been warned! So let's get to the story.

Philip Naughton is a public relations agent, currently a salaried employee of the Argento Mining Syndicate, who accompanies the company's English representative, Manuel Dagos, to the home of shady financier. Gordon Murrell made "a fortune running dubious Continental sweepstakes" and "the sort of man that gets South American companies into bad odour," but money is needed urgently and not many people are prepared to sink money in South American mines at the time. So with the "season's crop of lunatics" being limited, Naughton and Dagos grab a taxi to Murrell's flat. 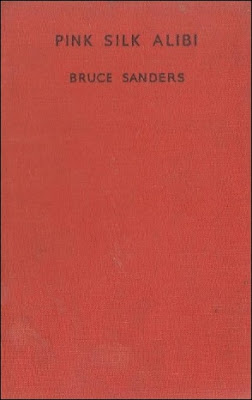 When they arrive, Naughton and Dagos hear a piercing scream coming from Murrell's apartment as the door flung open by his well-known wife, Penelope, who's "had pushed her way up from the chorus of a second-rate Paris music-hall" and became a famous stage actress – known to the theatrical profession in London and Paris as Pretty Penny. Gordon Murrell is lying inside "as dead as the shares of a cerain South American mining syndicate were likely to prove in a few hours" as the result of a bullet to the head. Penelope Murrell took her cue and made a quick exit before any questions could be asked, but Naughton spots a another woman suspiciously tiptoeing around the corridor and crime scene. Sally Heston lives at the end of the corridor to keep an eye on her brother, Tom Heston, who's fooling around with Penny. But why was she washing out the titular garment? Tom Heston shares rooms with his big, burly American friend, Greenly Matherson, who not only has a finger in the financial pie, but jammed his entire fist in it. So events begin to pile up with "a fantastic suddenness that would have been decried by the veriest amateur writer of sensational fiction" and forces Naughton to play detective. This also places him at odds with the policemen in charge, Chief Inspector Hayward and Sergeant Fuller, who really should have been the true detectives of the story.

However, if the two Scotland Yard men had been cast as the headline detectives, Sanders would have robbed Pink Silk Alibi of a very curious, but interesting, historical footnote.

Anthony Boucher credited Curtiss T. Gardner's Bones Don't Lie (1946) with introducing the first big business detective on record, but Pink Silk Alibi now has a claim on that purely historical honor. So I poked around to see if I could find exact publication dates for both books and guess what? Only date that comes up for both books is January 1, 1946! This can easily be explained as a default date created when the pages were made, but it's interesting to note that an American and British writer came up with the idea of a corporate detective at practically the same time. But very differently handled. Unfortunately, it's the only real claim the book has to historical relevance as the story, plot and most of the characters are not particular good or very memorable.

Now, to be fair, Pink Silk Alibi certainly wasn't a chore to read as it's amusingly enough written full with bantering, smart aleck dialogue and humor, which admittedly felt a good decade out-of-date – belonging to the pages of those posh thrillers from the late 1920s and '30s. I suppose some credit has to be given to Sanders for creating the illusion his paper thin, see-through plot had substance, but he did it with a very simple and cheap trick. Nearly every character is double-crossing someone, devising counter-plots or hedging their bets. So that keeps everything moving on very little fuel. But not very impressive, plot-wise. And made most of the characters unconvincing stage props. Occasional fuzziness in the details didn't help either. For example, Chapter III (A Murder) mentioned "there were no powder marks" on Murrell's face, but Chapter XIX (A Dénouement) states "he was shot deliberately by someone who could approach him and push a gun in his face" near enough "for the powder burns to show on his skin." Sometimes it's not difficult to see or understand why a writer descended into obscurity or why a book never got an extended print-run.

So perhaps an interesting curiosity for genre historians with a special interest in uncommon detective-characters to study, but, plot-wise, Pink Silk Alibi is nothing more than a bit of fluff.