The Christmas Card Crime and Other Stories (2018) is the third, wintry-themed anthology published in the British Library Crime Classics series, edited by Martin Edwards, collecting eleven festive stories about "unexplained disturbances in the fresh snow" and "the darkness that lurks beneath the sparkling decorations" – wrapped and presented to the reader like "a seasonal assortment box." This collection presents a wide variety of merry mayhem from the pens of some very well-known mystery writers to a few names who have only recently been rediscovered. But none of the stories have been, what you could call, anthologized to death. So let's pig on this suspicious looking, crime sprinkled Christmas pudding, shall we? Hmm, smells like bitter almonds! 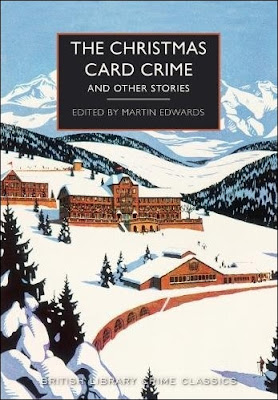 The collections opens with Baroness Orczy's "A Christmas Tragedy," originally published in the December, 1909, issue of Cassell's Magazine, which has a Christmas Eve party keeping an ear out for "the sound of a cart being driven at unusual speed." A sound that has lately become associated with a series of "dastardly outrages against innocent animals" in the neighborhood of Clevere Hall. So everyone is very keen to put a stop to these cattle-maiming outrages and the cart is heard that night, but this time it was followed by a terrible cry, "Murder! Help! Help!" Major Ceely, host of the party, is found on the garden steps with a knife wound between his shoulder blades. The local police gladly accepts the assistance of Lady Molly, of Scotland Yard, whose success or failure will decide the fate of an innocent man. Not a bad story for the time, but not one of my personal favorites.

Selwyn Jepson's "By the Sword" first appeared in the December, 1930, issue of Cassell's Magazine and has claimed a place among my favorite seasonal mysteries. Alfred Caithness is spending Christmas with his cousin, Judge Herbert Caithness, who has an idyllic home life with a wife, Barbara, who's twenty-eight years his junior and a five-year-old son, Robert – who loves playing with his toy soldiers. So the perfect setting for an old-fashioned Christmas party, but Alfred has reasons to be more than a little envious of his cousin. He has loved Barbara ever since attending their wedding and sorely needs the kind of money Herbert has aplenty, which is why he decides his cousin has to go when he denies him another loan. So, inspired by the family legend saying that "a Caithness always dies by the sword," Alfred begins to plot the perfect murder with all the evidence pointing to an outsider. However, the entire universe, or the Ghosts of Christmas, appear to be against him as even the best-laid plans can go awry. A fantastic inverted mystery from the hoist-on-their-petards category.

John Pringle is perhaps best remembered today by his principle pseudonym, "Gerald Verner," who prolifically produced pulp-style detective and thriller novels during his lifetime. "The Christmas Card Crime," published as by “Donald Stuart,” originally appeared in the December, 1934, publication of Detective Weekly (No. 96). Trevor Lowe, a well-known dramatist and amateur detective, who you might remember from my reviews of Terror Tower (1935) and The Clue of the Green Candle (1938) is en route with his secretary Arnold White and Detective Inspector Shadgold to spend Christmas with a friend in a small Cornish village, but their train becomes stranded when the heavy snowfall blocks the line. So they have to walk back to the previous station along with seven other passengers, six men and a woman, but they have to go from the empty station to an old, gloomy inn of ill-repute. During the night, two people are murdered in short succession with the thick, undisturbed carpet of snow indicating "no one came from outside and no one has left from within." The only real clue Lowe has to work with is a torn Christmas card. A good and fun piece of Christmas pulp, but more memorable for its mise-en-scène than its plot. However, I have to give props for turning the last words of the second victim in a kind of dying message sort of pointing to the murderer. 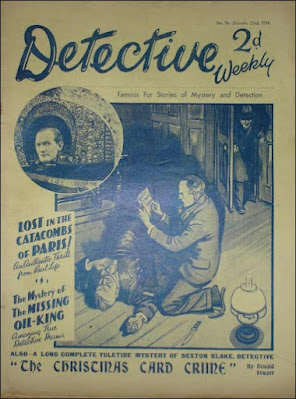 The next two stories have been previously reviewed on this blog, here and here, but, needless to say, Carter Dickson's "Blind Man's Hood" (1937) and Ronald A. Knox's "The Motive" (1937) can be counted among the best stories in the collection. Both come highly recommended!

Francis Durbridge's "Paul Temple's White Christmas" first appeared in Radio Times on December 20, 1946, but reads more like vignette than a proper short-short story. Paul Temple's dream of a white Christmas in Switzerland is granted when he's asked to go there to identify the main suspect in that Luxembourg counterfeit business he had help to smash. So not much to say about this one with only half a dozen pages and a razor thin plot.

Cyril Hare's "Sister Bessie or Your Old Leech" was originally published in the Evening Standard on December 23, 1949, which is another one of my personal favorites from this collection. Timothy Trent was brought up by his step family, the Grigsons, but Timothy was the only "one of that clinging, grasping clan" who "got on in the world" and made money – someone from that family has been annually blackmailing him. Every year, around Christmas time, he receives a payment notice signed by "From your old Leech." Timothy was actually surprised by the latest demand, because he assumed he had gotten rid of Leech last February. But here he was again. Or was it a she? Timothy goes to the Grigson family party determined to smoke out the blackmailer, but, once again, even the best-laid plans can go awry and here it comes with a particular dark, poisonous sting in the tail. An excellent crime story demonstrating why Hare was admired by both his contemporary brethren and modern crime writers like P.D. James and Martin Edwards.

E.C.R. Lorac's "A Bit of Wire-Pulling" originally appeared under the title "Death at the Bridge Table" in the Evening Standard on October 11, 1950, which is another short-short. Inspector Lang, the old C.I.D. man, tells the story of the time he had to protect an important industrialist, Sir Charles Leighton, who received threatening letters promising he will be dead before the old year's out. So he accompanies him, incognito, to a New Year's Eve bridge party where's shot to death in front of Lang's eyes and the murderer apparently managed to escape. However, the sharp-eyed detective quickly begins to pick up the bits and pieces that tell an entirely different story. More importantly, he trusts the men he has personally trained. Lorac was somewhat of a female John Rhode, as she was very keen on technical trickery, but you can't help but feel the murderer was doomed from the start by employing such a ballsy method. A pretty decent short-short. Not especially memorable, but not bad either. 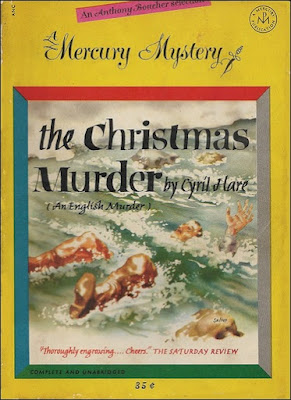 John Bude's "Pattern of Revenge," another short-short, was first published in The London Mystery Magazine (No. 21) in 1954 and surprisingly turned out to be an impossible crime story set in Norway. The story is a retrospective of a rivalry between two men, Thord Jensen and Olaf Kinck, who vy for the attention of a beautiful woman, Karen Garborg, but one morning she found dead on the doorstep of her cottage – stabbed through the heart. There was "only one set of tracks in the fresh-fallen snow," single footprints alternating with deep pock-marks, "characteristic of the imprint left by a wooden leg." Olaf has a wooden leg and his fingerprints were on the knife. So he was sentenced to life imprisonment, but a deathbed confession shed new light on the murder and attempts to right a wrong. A very well done short-short and a truly pleasant surprise to come across this unusual take on the footprints-in-the-snow impossible crime.

John Bingham's "Crime at Lark Cottage" was originally published in the 1954 Christmas edition of The Illustrated London News and brings a slice of domestic suspense to the family Christmas table. John Bradley gets lost on a dark, snowy evening while his car is on the verge of breaking down and ends up at a lonely cottage. There he finds a woman with her small daughter and asks to use the phone, but is offered to stay the night as there's not garage around who would come out to the cottage at that time of night in foul weather. But she appears to be frightened. And it looks like someone is prowling around the cottage. A very well done piece of crime fiction that would have served perfectly as a radio-play for Suspense.

The last story to round out this seasonal anthology is Julian Symons' "'Twix the Cup and Lip," but nothing he wrote interests me and skipped it. That brings me to the end of this collection.

So, on a whole, The Christmas Card Crime and Other Stories is a splendidly balanced anthology with Dickson, Hare, Jepson, Knox and Stuart delivering the standout stories of the collection with the other entries being a little too short or dated to leave an indelible impression on the reader. But not a single real dud or over anthologized story to be found. Two things that tend to be obligatory for these types of short story collections. Definitely recommended for those cold, shortening days of December.