We're steadily nearing the end of the year and the holiday season is close upon us! I already read two seasonal-themed mysteries some months ago, Brian Flynn's The Murders Near Mapleton (1929) and Moray Dalton's The Night of Fear (1931), but they were not intended as part of my annual Christmas reading. So, over the next two months, I'll try to knock the remaining seasonal detective novels and short stories off my list. 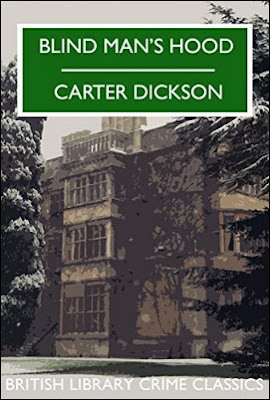 I decided to begin with rereading one of the best short stories ever written in this particular sub-category of the detective story.

John Dickson Carr's "Blind Man's Hood," published as by "Carter Dickson," originally appeared in the Christmas edition of The Sketch in 1937 and was republished as "To Wake the Dead" in the December, 1966, issue of Ellery Queen's Mystery Magazine – collected (fairly) recently in The Black Lizard Big Book of Locked Room Mysteries (2014) and The Christmas Card Crime and Other Stories (2018). The story's most well-known appearance is in the original hardcover edition of The Department of Queer Complaints (1940).

"Blind Man's Hood" opens with a young married couple, Rodney and Muriel Hunter, arriving at the home of their friends, Jack and Molly, in "the loneliest part of the Weald of Kent." A seventeenth century country house, named "Clearlawns," but the front door is standing open and nobody responds to their knocking.

So they hoisted their luggage and a box of Christmas presents inside, where they are greeted by an young, pleasant-faced woman, who explains everyone's "always out of the house at this hour on this particular date" – attending a special church service. A custom, or pretext, for more than sixty years to give people an excuse to be away from the house between seven and eight o'clock on Christmas Eve. She tells them a winter's tale in two parts that straddled the genres of the detective and ghost story.

During the 1870s, the house was occupied by a newlywed couple, Edward and Jane Waycross, but on a dark, snowy evening in February, Jane found herself all alone in the house.

There were several witnesses who saw her standing behind a window after the snow had stopped falling, but, the following morning, Mrs. Randall, the old servant, is the first to return and finds "the house all locked up." She gets no response to her knocking and decided to smash in a window. What she finds inside is the stuff of horror stories: the body of Mrs. Waycross was lying on her face in the front hall, "soaked in blood and paraffin," with her throat cut and charred from the waist down. A terrible, gruesome and inexplicable murder. All of the doors and windows were securely locked and bolted on the inside. And the only footprints in the snow outside belonged to one of the witnesses and Mrs. Randall.

So how did Mrs. Waycross' murderer entered, or left, the tightly locked house without leaving any footprints in the snow? The police were never able to provide an answer to these questions, but this is not where the story ends, because eight years later there was a Christmas party at the house and one of the attendees was someone involved with the murder case – who dies under ghostly circumstances during an unnerving game of Blind Man's Bluff. This ghost story is the reason why nobody is ever in the house between the hours of seven and eight on Christmas Eve.

Uncharacteristically, of Carr, the impossibility and revelation of the locked room-trick aren't the centerpiece of the story. You can even say that the whole locked room situation is a little underplayed. For example, there's no theorizing how the murder could have been done. This story slowly unravels itself, which can be a disappointing approach, but Carr was a master stylist and you can't help but be fascinated how seamlessly he merged the detective and ghost story without leaving the reader feeling like they were cheated. The result stands as one of Carr's creepiest and darkest story.

My fellow JDC fanboy, "JJ" of The Invisible Event, reviewed "Blind Man's Hood" back in 2016 and he made several astute observations on why Carr was practically unequaled in the genre as a stylist. One of the clearest examples is the contrast between the opening and closing paragraphs of the story. There really was nobody better than Carr.

So, purely as a semi-historical locked room mystery, "Blind Man's Hood" is merely another excellent short story by the Grand Master, but how the ghost story takes possession of the plot without damaging the detective elements makes it a (minor) masterpiece! Highly recommended to everyone who knows how to appreciate good story telling regardless of the genre.
Geplaatst door TomCat on 11/03/2019