December is nearly upon us and, if you're an incurable mystery addict, you probably have some of festive detective novels, short stories and perhaps even an anthology, or two, lined up to read during the Christmas season – a Victorian tradition that is still very much alive in the detective story. One of my reasons to always start relatively early with reading and reviewing these seasonal mysteries is that the holiday season has the habit to begin prematurely in my country. You can usually get Sinterklaas (St. Nicholas) candy as early as September or October.

Another reason is that I want to give my fellow mystery addicts a recommendation or two, before December, which is why I have tackled so many of the lesser-known Christmas-themed mystery novels. Such as Moray Dalton's The Night of Fear (1931), C.H.B. Kitchin's Crime at Christmas (1934) and Francis Duncan's Murder for Christmas (1949). 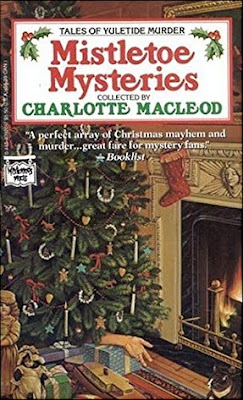 So, today, I have a festive, quasi-impossible crime story that was intended for last year, but didn't get around to reading it then.

Edward D. Hoch's "The Touch of Kolyada" was originally written for a Christmas-themed anthology, Mistletoe Mysteries: Tales of Yuletide Murder (1989), edited by award-winning mystery writer, Charlotte Macleod. The detective of the story is the first detective-character Hoch ever created, Simon Ark, who claims to be a 2000-year-old Coptic priest wandering the world in the hope of meeting the devil in combat.

When the story opens, Simon Ark has been living at a university near "the northern tip of Manhattan," where he has been studying medieval legends, but "an unusual situation" has developed among some of his academic friends – a situation Ark described as "a mystery of good rather than evil." There are many Russian emigres on the faculty, who moved there with the family over the past twenty years. But a figure from Russian folklore appears to have followed them to America.

Kolyada is a beautiful elf maiden, cloaked in "a luxurious white robe and hood," who's said to ride a sleigh, from house to house, delivering gifts much as "Santa Claus does in Western countries." Recently, the children of the faculty members claim to have seen Kolyada. She has even entered homes to leave gifts for the children. So a very benevolent mystery, but it takes a dark, sinister turn when Ark and the narrator witness Kolyada appear behind the window of Professor Trevitz house.

A figure in a white-hooded robe carrying a basket, crammed with candy and fruit, who goes from the kitchen into the living-room where she bends over Professor Trevitz, who's sitting in a chair, touches his cheek with her outstretched fingers – only to flee when Ark yells out her name. When they enter the place, they discover the icy cold, solidly frozen body of the professor sitting in the chair. Suggesting that he had instantly frozen to death the moment the robed figure had touched him.

Unfortunately, Hoch never developed this premise into a full-fledged impossible crime and the story, which is not one of his greatest, sheds the intrigue of the opening pages to become regular, somewhat routine, detective story. This was a bit disappointing. Nonetheless, it was still a fun and unusual Christmas-themed detective story with a memorable set piece. I also enjoyed how much of the plot resembled the kind of stories you often find in Gosho Aoyama's Case Closed (Detective Conan) series. I can easily imagine Conan becoming involved with an utterly bizarre, borderline impossible murder apparently committed by ghostly figure from folklore and the motive didn't help dispel that illusion.

A note for the curious: I took "The Frozen Teacher," in the title of this blog-post, from an early Detective Conan story collected in volumes 14 and 15, which have been translated and are currently available in English. Just a friendly reminder that there's gold in those hills.

Anyway, "The Touch of Kolyada" is hardly one of Hoch's greatest detective stories, but a perfectly suitable Christmas read with a great premise, a memorable scene and a serviceable ending. So a little average, perhaps, but certainly not bad.
Geplaatst door TomCat on 11/21/2019