Murder for Christmas (1949) by Francis Duncan

One of the more obscure mystery writers to reemerge from the shrouded mist of the past during this current Renaissance Age is "Francis Duncan," a pseudonym of William Underhill, who authored twenty detective novels over as many years and were largely forgotten for decades – until Random House decided to reprint him back in 2015. Murder Has a Motive (1947) and So Pretty a Problem (1950) were undoubtedly worthy of being resurrected.

Back in October, Dean Street Press revived the work of an equally obscure, long-since forgotten writer, Francis Vivian, whose detective stories beg to be compared with Duncan. 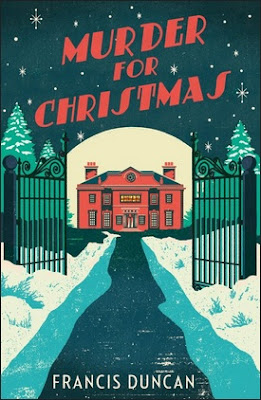 Most notably, they both have likable, humanist series-detectives and, stylistically, appear to be very similar. John Norris, of Pretty Sinister Books, posted a comment on my review of The Sleeping Island (1951) saying how Vivian's Darkling Death (1956) reminded him of Duncan's Behold a Fair Woman (1954). There are, however, differences between the two. Duncan was a more polished, literary writer with a firmer grasp on characterization, but Vivian tended to have tighter, better clued and more original plots (e.g. The Singing Masons, 1950) – which makes them more satisfying as pure detective stories. And the biggest difference is that Vivian's Gordon Knollis is the consummate policeman, while Duncan's Mordecai Tremaine quintessential amateur sleuth.

Vivian made me want to return to Duncan's detective fiction for a second look and had saved one of those recent reprints for those cold, dark days before Christmas.

Murder for Christmas (1949) has all the trappings of a traditional, wintry Christmas detective story in the spirit of C.H.B. Kitchin's Crime at Christmas (1934), Agatha Christie's Hercule Poirot's Christmas (1938), Georgette Heyer's Envious Casca (1941) and Ngaio Marsh's Tied Up in Tinsel (1972). But the writing lifts this one above your average, Yuletide mystery novel.

The stage of the story is an ancient hall, Sherbroome House, which had been the seat of the Barons of Sherbroome for centuries and sighs under the weight of history, but their descendants had not lived in the house for generations and the place became overgrown, derelict and dreary – until Benedict Grame bought it. Grame is a Mr. Pickwick of a man who loves "the atmosphere of the Dickensian Christmas" with "all of the festivities we associate with the season." So, once every year, he gathers a group of relatives, friends and associates at his house "to enjoy Christmas in a really old-fashioned way."

A new addition to the party this year is the retired tobacconist, hopeless romanticist and potent murder-magnet, Mordecai Tremaine, who has a deep-rooted passion for criminology and sentimental literature – reading the treacle-laden magazine Romantic Stories throughout the series. Tremaine always reminds me of Agatha Christie's Mr. Satterthwaite. An elderly, benevolent and sentimental soul who gets all dreamy-eyed when confronted with young people who are deeply in love. But this close ally of lovers everywhere also has a shadow-side to his personality.

Tremaine has an appetite for detection, "the excitement of the chase" and "the keenness of testing his brain against the cunning of a murderer," but he's aware the price of his hobby is "the destruction of a human creature." A mystery is something he simply could not resist. And the promise of a mystery is what lured him to Sherbroome House. 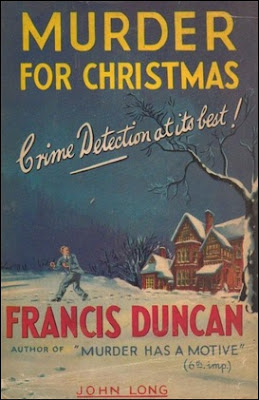 A postscript had been added to Tremaine's invitation by Grame's confidential secretary, Nicholas Blaise, telling him there's "something wrong" at Sherbroome House.

When he arrives at the house, Tremaine finds exactly what you'd expect from a Christmas party in an old-fashioned mystery novel: there are two young lovers, Roger Wynton and Denys Arden, but her guardian, Jeremy Rainer, is dead-set against the marriage. Grame's hermit-like sister, Charlotte, and a close friend, Gerald Beechley, who has a penchant for practical jokes. Rosalind Marsh is the cool-headed, cynical owner of a curio-and art shop and Lucia Tristam is a widow with her sights set on either Grame or Rainer. Professor Lorring is "drawn after Ebenezer Scrooge" and openly defies the spirit of Christmas. The party is rounded out by a married couple, the Napiers. Just about as unexpected, Tremaine finds that the jolly, good natured spirit of the season is only on the surface. And that the party has an inexplicable animosity towards the lavishly decorated Christmas tree.

So the snow-covered countryside provides "a seasonable background" to the apparent jolly Christmas party at Sherbroome House, but to Tremaine everything feels unreal. And has the feeling that, sooner or later, you were going to find yourself in the middle of a nightmare.

Well, the inevitable happens when the household is awakened very early on Christmas morning by screaming and they find a "fantastically clothed body sprawled under the Christmas tree" that had been despoiled of its gift. Someone had shot Father Christmas!

The policeman placed in charge of the investigation is Superintendent Cannock, a friend of Inspector Jonathan Boyce, who has been told about Tremaine and wants to use him as "a sort of unofficial observer," but his fellow guests are aware he's a detective and are as reluctant to talk to him as they are to the police – making it all the more difficult to sort out the pack of lies confronting them. However, Tremaine slowly, but surely, unravels a cruel, complicated and fascinating plot that resulted in the unfortunate murder of Father Christmas. A plot that, in some ways, reminded me of Nicholas Brady's The House of Strange Guests (1932). But the plot also has its weak points.

Duncan was a good writer, who knew how to tell a story and characterize, which is probably why all of the important clues hinge on the behavior of the characters, but these are more hints than clues. And they're not enough to help you pinpoint the murderer or the motive. There are barely any physical clues and important pieces of information are given too late into the game or not at all, which distracts from an otherwise well-written story and clever plot. A long-time mystery reader can probably half-guess, half-deduce the murderer's identity, but crossing the t's and dotting the i's is a lot harder to do. And finding out the somewhat original motive is next to impossible.

So, purely as a detective, Murder for Christmas is not going to make the shortlist of all-time best country house mysteries, but as a seasonal detective story, the book is definitely a cut above most Christmas mystery novels – a category of detective fiction that has yet to produce a genuine classic. What makes Murder for Christmas stand out is the great, often evocative writing and actually making the Christmas celebration part of the plot (e.g. the village carollers, the Christmas tree and the Santa Claus customs). Something you can't say of every Christmas-themed detective novel.

Unless you're an old humbug, Murder for Christmas comes recommended as a pleasant, leisure read for the holidays.
Geplaatst door TomCat on 11/30/2018