The Case of the Missing Men (1946) by Christopher Bush

Christopher Bush's thirtieth detective novel, The Case of the Missing Men (1946), takes place in 1944 and Ludovic Travers, who was invalided out of the army the previous year, has become a consulting specialist for Scotland Yard, but here his prior work as a writer brings him to the home of a celebrated mystery novelist, Austin Chaice – a character who may have been modeled after Anthony Berkeley. Our in-house genre-historian, Curt Evans, noted in his introduction that this was not the first time Berkeley was "a satirical target" of Bush (c.f. The Case of the Monday Murders, 1936). 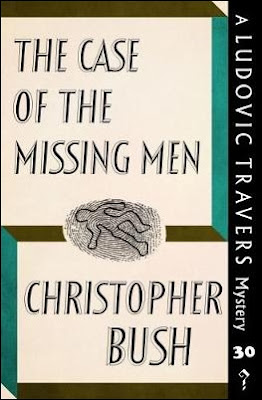 The Case of the Missing Men presents the reader with, as Anthony Boucher described it, "the simon-pure jigsaw-puzzle detective story" and this helped the book secure a spot on my list of favorite Bush mysteries.

Travers is summoned to Lovelands, the Beechingford home of Chaice, by two separate invitations. One of these invitations came from his literary agent, Cuthbert Daine, who has found a publisher prepared to reprint two of his books as special editions and wants him to come down to work out a contract.

Daine had been bombed out of his office in London during the Blitz and Chaice had put a large, converted barn at Lovelands at his disposal. The second letter came from Chaice and he wants to use quotes from a book Travers wrote, Kensington Gore, to use in "a kind of manual for budding authors of detective novels" he's working on. But when he arrives at Lovelands, Travers discovers a household that is set up like a game of Clue.

Chaice is married to Constance, a cousin of Travers' wife, whom he remembers as a terribly spoiled, decidedly oversexed flapper and there are two children from his first marriage, Kitty and Richard. Kitty is "a spirited veteran" of the ATS (Auxiliary Territorial Service), while Richard is a neurotic Oxford student trying to hack it as a modern poet and his father hated it – referring to his poems as "mental abortions." Chaice also has an elder brother, Richard, who had been a rolling stone, but suffered from "fits of abstractions" ever since he lost his wife and was bombed in the Blitz. And now he spends a lot of time in his workshop at Lovelands. Orford Lang is Chaice's private secretary with a failed career behind him as a mystery novelist.

Chaice is a schemer, through and through, who loves to play games and toy with people as well as the public at large. A notorious example of this is when he purloined a typewriter from the headquarters of a small army unit stationed near Lovelands.

After a few days, Chaice wrote to local newspaper to reveal himself as the thief and slammed the authorities for their "scandalous laxity" in the care of government property, however, it turned it he had an ulterior motive for the theft – using the episode in a book he was writing. When the story opened, the town was in "the throes of a sensation" as some maniac used the combination of crowds pouring out of the local cinema and the blackout to squirt a filthy liquid over women's clothes. Some at Lovelands believe Chaice is up to his old tricks again. And there have been anonymous letters, signed "P," which outright accuses the mystery writer of being behind this outrage.

So the family ropes in Travers and Daine to put a tail on their host and the followed him to the house of his next door neighbor, G.H. Preston, but the whole campaign was a bust. But when they returned to Lovelands, they discover the body of Chaice in his study with a cord tightly pulled across his throat! 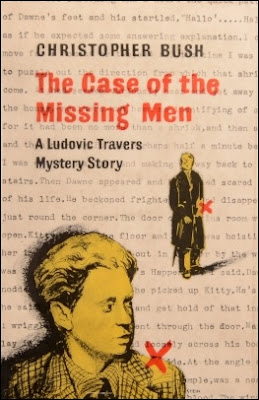 Initially, Travers works together with a local and much respected police inspector, named Goodman, but when a second murder is committed, disguised as a suicide, the Chief Constable, Colonel Marney-Hope, decides to call in Scotland Yard – reuniting Travers with his long-time partner in crime, Superintendent George "The General" Wharton. I have prattled enthusiastically in past reviews how perfect they are when they work together, playing off each others strength and weaknesses, and, as said in my review of The Case of the Platinum Blonde (1944), nobody really nailed the relationship between the amateur and professional detective quite like Bush.

Wharton is the consummate professional with the patience of a fisherman and repertoire of a character-actor when it comes to interviewing suspects or witnesses, which made him one of the Big Five of the Yard. On the other hand, Travers has "a helterskelter, flibbertigibbet, crossword sort of brain" that "works quickly or not at all." So this makes him, as Wharton calls it, a prize theorist whose average is one theory right in every three. And this means that Wharton, every now and then, beats Travers to the solution (e.g. The Case of the Murdered Major, 1941).

However, they have genuinely respect for each others abilities and The Case of the Tudor Queen (1938) perfectly describes their relationship as two opposites that make a perfect fit. I couldn't agree more!

The Case of the Missing Men has them neck-to-neck in the race to the solution, as they try to make sense of such clues and red herrings as an out-of-bounds summerhouse, a stick of grease paint, a block of wood and letters that were recovered from Preston's house – one of the missing men of the book-title. Wharton makes a shrewd deduction, identifying one of the red herrings revealing part of the truth, but the one who spots the elusory, well-hidden murderer is Travers. And completely demolishes a set of risky, closely-times alibis in the process. The alibi-tricks in Bush's mystery novels is something that will never fail to delight readers mostly concerned with the plot of a detective story.

On a side note, the second murder, or ideas used to commit that murder, bear an uncanny resemblance to the murder from Cat's Paw (1931) by Roger Scarlett, but with a somewhat different outcome. One of these differences is the inclusion of the murderer's daring alibi.