The Case of the Tudor Queen (1938) by Christopher Bush

The Case of the Tudor Queen (1938) is the eighteenth mystery novel by Christopher Bush and has the unfortunate, two-sided reputation of being an ingeniously plotted detective story marred by lackluster writing and paper-thin characterization. This appraisal of the book is not entirely without merit. However, I can be very forgiving of a detective story's imperfections, like a cast of cardboard characters, if the plot is well put together – probably the reason why I never had a problem with the so-called humdrum school of mystery writing. The Case of the Tudor Queen has quite a rack of a plot on her!

A tricky, complicated plot that slowly begins to unravel when Bush's lanky, bespectacled economist and freelance detective, Ludovic Travers, is driving his Rolls-Royce up from Southampton.

Superintendent George "The General" Wharton is in the passenger seat next to him and Palmer is sitting in the back, which makes for a diverse party that provides the book with brief, but interesting, character sketches of the men – only genuine piece of characterization in the entire novel. Travers is described as a man who had been born with "a gold spoon in his mouth" to whom "deduction and the chase were the most thrilling of hobbies" and as a detective was always looking for "the short cut." Wharton was a man who had risen from the ranks and his preferred method is "patient inquiry, slow accumulation" and "the gradual elimination of the unwanted." They were "the perfections of the opposite that make the unique fit."

Travers had missed a turn along the way and they got lost, which is how they ended up at the front-gate of a cottage standing on the outskirts of a tiny village.

A woman emerged from the gate of the cottage, as they passed it, who looked in a hurry and they offered her a ride to the nearby train station. The name of the woman is Edith Bunce, a maidservant and dresser, who's in the employ of a well-known theatrical actress, Mary Legreye – currently playing Mary Tudor in Stony Heart. Legreye had given Bunce a three-day holiday and expected her back at the cottage that day, but the cottage was still all locked up and Legreye had not come with the last train of the day.

Travers and Wharton decide to accompany Bunce back to the cottage, which turns out to have been burglarized. The telephone-line had been hacked through with a knife and later two miniatures, that had hung on the wall, are discovered to be missing.

There's evidence Legreye had arrived at the cottage, but inexplicably left again without her hat, fur and gloves. So this interests our detectives and they decide to take a gander at the main residence of the missing actress, a two-storey house in Westmead called Arden, which is dipped in darkness when they arrive there and awaiting them inside is the scene of a bizarre, double tragedy – which could be either murder, suicide or a combination of the two. Fred Ward was employed by Legreye as an indoor servant and part-time gardener, as "a kind of permanent charity" on her part, but the man was now laying on the kitchen floor. Ward had been dead for many hours.

Legreye is eventually found in an immense room that ran along the whole front of the house and the room had been cleared of all furniture, which had been placed behind a large screen. The only furnishing in that bare room was a single high-backed, winged chair with a side-table next to it. A throne on which the body of Mary Legreye was seated, like "a queen posed to give an audience," with an empty glass and an uncorked bottle standing on the table besides her. Legreye and Ward had both been poisoned. And there was a twenty-four hour gap between their deaths! 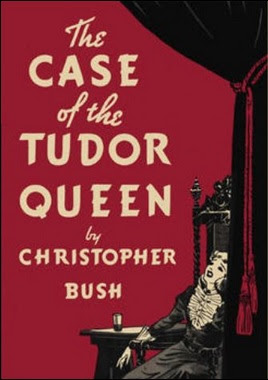 Admittedly, I think these opening chapters are the only really engagingly written parts of the story with the investigation at the dark, gloomy house, after the bodies had been discovered, resembling a mansion-story by Roger Scartett – in which the house almost becomes a character itself in the story. Travers is even relieved when finally two uniformed constables arrive, because the house no longer seemed "as clammy and deadly silent." The arrival of the local police had miraculously turned the place into "a mere building" that held "a grim, and even alluring, mystery."

However, I can understand why some readers have a problem with the remainder of the story, which is, regrettably, as flatly written as it's characterized and the plot is structured like one of the earlier novels from the series (c.f. Dead Man Twice, 1930). Something probably not every reader will appreciate.

The Case of the Tudor Queen is divided into two parts, respectively titled "Presentation" and "Solution," which gives the main-stage almost entirely to Superintendent Wharton. As he questions suspects and tests the soundness of their alibis, Travers recedes into the background, like a chameleon, to polish his “monstrous hornrims” and ponder the case. A similar role he had in the earlier novels, like The Perfect Murder Case (1929), but Travers is still the one who eventually gets hold of the solution. Although it took a while in this instance.

The last portion of the story takes place months after the initial investigation, which lead to nowhere, but, by pure chance, Travers is placed on the right track that allows him to completely demolish one of the suspects air-tight alibis – which also explained the clue of the "flake of green enamel paint." I wanted to kick myself for having missed that "the vital clue" that tied the murder or Legreye to the play and the life of the historical character she had portrayed on stage. In my defense, this link didn't occur to Travers either until the last couple of pages.

So, on a whole, The Case of the Tudor Queen is an imperfect detective novel, notably the lackluster story-telling and flat characterization, but the plot is an interesting take on the theatrical mystery. A theatrical mystery that primarily took place in the private life of the lead actress and how the murders came about, as well as why her body was posed on the throne, is vintage Bush. This made for a clever, intricately plotted detective novel that was perhaps not told as well as it could have, but this did not deter me from enjoying the book. I think fans of Bush, Freeman Wills Crofts and John Rhode will agree with me. Unless you're JJ.
Geplaatst door TomCat on 6/15/2018