Robert Colby was a writer of tough, fast-paced paperback originals and his short stories were regularly printed in two popular publications, Alfred Hitchcock's Mystery Magazine and Michael Shayne's Mystery Magazine, but only readers and collectors of hardboiled paperback originals appear to remember his work – some of whom believe Colby "never got the fame and recognition that he deserved." Honestly, I likely never would have given Colby a second glance had it not been for an alluringly titled novel, In a Vanishing Room (1961), which sounded full of promise. 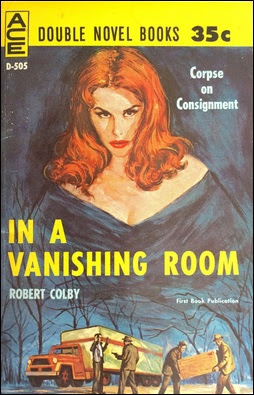 So, I looked into the book and found a short, but helpful, review on MysteryFile. The review accurately described it as a minor story with "no frills in the telling" and "action packed content" that "zooms right along." But what caught my eye was the description of the titular gimmick: a basement room that vanishes alongside with the entire basement! I found an impossible crime novel Robert Adey missed in Locked Room Murders (1991). Well, you know me, the promise of an impossible crime is enough to rope me in.

In a Vanishing Room is a pacey, thrill-filled chase story and the trouble begins when the unlikely protagonist, Paul Norris, boards a plane in Miami, Florida to go to New York.

Norris has been on a downward spiral ever since his wife divorced him and savagely began to drink, escape in cheap thrills and throwing away a hundred seventy-five bucks every five work days in Miami – where he worked as an account executive for a major company. His self-destructive behavior puts him on notice with the company and without work, Norris would be broke in three-weeks time. So he asked to be transferred to the New York branch, but there he has to reapply for a position and, with nothing to lose, he boards a plane to New York. And there the trouble begins.

At the terminal of the International in Miami, Norris witnesses an "odd, tense little scene." Norris was waiting in line to collect his ticket when a man brushed his arm, who then broke out in a sprint towards the exit, dropping his bag along the way, shortly followed by two raw-boned, crew-cut blond men in dark suits in pursuit – who returned less than a minute later to retrieve the fallen bag. When he arrived in New York, Norris is approached by a red-headed woman, Eileen Taggert, asking if he was the last person who came off the plane. Taggert had been waiting on her lawyer, Harry Wheeler, who apparently was the man being chased in Miami by the two men in black.

This is the point where the plot becomes a bit tricky to describe, because this is a chase story, fraught with danger and double-crosses, which rapidly moves from one scene to another. However, I can tell you that the plot is propelled forward by a signed receipt from Morgan van Lines, Inc. for a packed crate. Or, as one of the characters referred to it, "the awful box." The crate supposedly holds "something worth millions" and everyone wants to get their hands on the crate or receipt, which was slipped in Norris' coat-pocket when Wheeler brushed up against him at the airport and drags him into a dangerous adventure that even brings him to San Diego – where an entire basement miraculously vanishes.

Norris is hired by the owner of the crate, Everett T. Kavanagh, to have it picked up in San Diego and sends his personal secretary, Marian Collison, along with him. Shortly after they arrived, Norris and Collison find themselves face-to-face with a hired gunman in a basement room. They come out alive, but, when they returned the next day with the police, an elderly woman lived at the address and the door to the basement now opened into a broom closet – nothing to indicate any trickery. It was a normal broom closet with a broom, dust pan and a mop. Unfortunately, the solution for the vanishing basement is very basic where disappearing houses, rooms and streets are concerned. 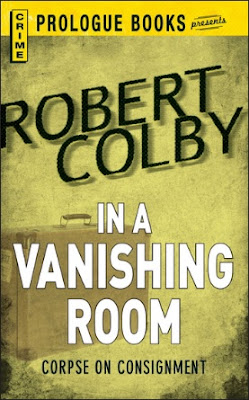 I fear experienced mystery readers will immediately catch on to how the trick works when they try to find their way back to the house. Regardless, I found it interesting that a miraculous, Carr-like impossible problem has been used in a story that also featured a brutal rape-murder. That's quite a contrast.

On a side note, I may have found an original, if unlikely, way to make a basement vanish as if by magic. You (uhm) simply fill the entire basement with concrete, until it reaches the top of the steps, after which its floored and carpeted over. The nook behind the former basement door can be converted into a broom closet. Even if the broom closet is taken apart, because the carpeting looked suspiciously recent, all they'll find is (what looks like) the concrete foundation of the house. And that's how you make a basement disappear. Don't try this at home, kids.

There's not much more that can be said about the book. In a Vanishing Room is a fast-paced, thrill-filled chase story crammed with deceitful characters, double-crosses, murder and a multi-million dollar stake, but the bloody gunfight that settled the plot was a reminder why I prefer the traditional, plot-driven and clue-filled detective story. Obviously, Colby was not writing a traditionally-structured detective story and can understand why people like these fast-moving, hardboiled crime stories, but my preferences in crime-fiction simply lie elsewhere. In a locked room.

Still, it was a quick, interesting read and made for a nice little excursion outside of my usual boundaries, but my next post will be a return to my beloved Golden Age. I found something that has potential. Something that is giving off Carrian vibes.
Geplaatst door TomCat on 6/24/2018