Jay Clarke is a Canadian lawyer specialized in criminal insanity and a novelist who writes under the pseudonym of "Michael Slade," a penname he has shared with Rebecca Clarke, John Banks and Richard Covell, who collaborated on fourteen novels about the Special X division of the Royal Canadian Mounted Police – published between 1984 and 2010. I understand that the series is written on three concentric levels: who-and howdunit form the core of each story that's wrapped in psychological horror tinged with supernatural elements. The outer layer, or outward appearance, is that of a modern-day police procedural. Stories are stuffed with gore. Lots of gore. 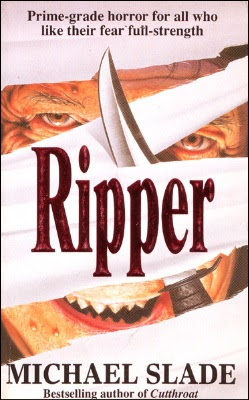 So you're probably wondering why a gentleman of taste and a connoisseur of the traditional detective story, like yours truly, is doing with a gory serial killer thriller from the 1990s.

The Special X series was lauded by John Dickson Carr's grandson, Wooda H. McNiven, who praised Ripper (1994) as "a fair play whodunit" in "the Grand Guignol tradition" with one seemingly impossible, ultra-gruesome killing taking place after another and the story is littered with references to the master of the locked room conundrum – who, according to McNiven, would probably have given the book "two thumbs up." Apparently, Carr was an enormous influence on the series and there are two additional titles crammed with impossible crimes.

Crucified (2008) has impossible murders committed on an airborne bomber and a submerged U-boat, while Red Snow (2010) has two locked room puzzles and a dying message. Ellery Queen is another writer who greatly influenced the series. I was tempted to begin with Crucified, but settled on Ripper as it seemed to be one of the more highly regarded titles in the series.

Firstly, I have to say that the writing, structuring and background of Ripper reminded me of Christopher Fowler's Peculiar Crimes Unit series, because the plot is steeped in the lore of Jack the Ripper, Aleister Crowley, Tarot cards and Satanism. I suppose the similarities are not entirely coincidental as Fowler started out as a horror writer who has since dabbled in the locked room sub-genre when he began writing the PCU books. Only drawback is that the background material, concerning the shenanigans of Jack the Ripper and Crowley, tend to read like textbook excerpts, which is not something every reader can appreciate, but it didn't bother me at all here – even helping to give to story itself a (sort of) personality. But let's take a closer look at the plot of the story.

The plot of Ripper consists of two, intertwining plot-threads beginning with the gruesome killing of a prominent American feminist, named Brigid Marsh, who was "strangled, stabbed, skinned and strung up like a piece of meat." She was dangling by a hooked chain, spiked into the base of her skull, from the Lynn Canyon Suspension Bridge. A homeless witness below saw the body come over the bridge and heard the footfalls of two people on the bridge.
Corporal Nicholas Craven of the Mounted Police is the police-detective in charge of the investigation, but, since the victim is a citizen of the United States, he has to contact the Commander of the Special External Section of the Mounted Police (Special X), Robert DeClercq – whose unit handles criminal cases in Canada with a foreign link. This specialized police unit, "staffed by those who'd once spied for the now-defunct Security Service," is another aspect that reminded of me of Fowler's PCU series.

Craven and DeClercq work (more or less) together on the case and their attention is soon drawn to a recently, independently published horror novel, entitled Jolly Roger, which was written by "Skull & Crossbones." Only problem is that the murder preceded the publication of the book. So the book is a direct link to the murderers, but the small-time publisher, Fly-By-Night Press, have no idea who the author, or authors, really are. The only line of contact between the publisher and writer is through a Vancouver postbox. As an interesting side-note: a minor sub-plot of the story is the torture and murder of a Publishers Weekly reviewer, Chas Fowler, who had described Jolly Roger as "the nadir of horror fiction" and an "argument for censorship" – which ended with him getting his head squeezed by mechanical plates until his face split in two and the skull collapsed in on itself. I would really like to know if Slade had a particular reviewer in mind when he wrote that passage. 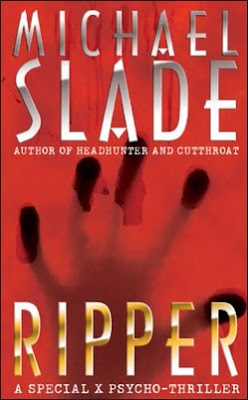 A second, interesting aspect, of this first plot-thread that should be mentioned is that entomology plays an important role in tracking down the killer. The first victim had been stabbed numerous time in the abdominal region and lice were found there that are normally only found on animals, which are eventually identified as having come from a very specific and endangered animals. This kind of foreshadowed the CSI craze of 2000s and shows how much Slade liked to blur the borders between different (sub) genres.

During this investigation, which takes up half of the book, we get the setup of the second plot-thread.

A woman by the name of Elvira Franklen lives with a gang of cats, all of them named after fictional detectives and mystery writers, and she has been writing "interactive mysteries" since the 1930, but none of them prompted a response like Shivers, Shudders and Shakes: Seance With a Killer – which had been purchased by an unknown buyer and this person had given her strict instructions. A select group of people were to be gathered and brought to Castle Crag on Deadman's Island. Only thing they needed for the charity event was "a real sleuth" and DeClercq had promised Franklen he would provide them one.

Inspector Zinc Chandler was a member of Special X, but he had been shot through the head during the events described in Cutthroat (1992) and, as a consequence, had been sidelined for several years. Unfortunately, the powers that be are reluctant to bring him back into the fold. So DeClercq asks him to go the charity event on Deadman's Island. However, shortly after his arrival there, he quickly stumbles to the conclusion that he has walked into a veritable death-trap as people die left and right in what can only be described as a wholesale slaughter. And several of these killings are of the impossible variety.

A deadly crossbow bolt is fired from a nook in the dining room, where the dust and cobwebs were undisturbed, which has a secondary impossibility of how the antique crossbow could have been fired. As it would have fired itself immediately had it been cocked, loaded and then replaced, because "the heavier weight of the crossbow squeezed the handle toward the stock." There's even an illustration of the crossbow explaining how to operate it. The explanation for this impossibility is deadly simple and finds a new use for a classic locked room technique.

A second impossibility occurs when Chandler witnesses someone entering the Turkish bath, but when he enters only a moment later this person is laying on the floor with his throat cut and a "Y" had been drawn in blood on the tiled-floor – a dying message. Unfortunately, the dying message was rather weak, because it was left unfinished, but the locked room-trick itself was acceptable enough. And these are only two of the murders that took place there over a short period of time. Nearly all of those murders are the result of ingenious and psychotic booby traps that have been rigged up all around the castle.

A good example of these booby traps is when two of the guests, while having sex in a canopy bed, are trapped inside a net with together venomous baby snakes. Why baby snakes, you ask? The reason given in the book is that adult snakes conserve venom by giving dry bites, but young one (of every species) are barbarians. So, a baby snake, who is frightened by humans, "will empty their poison glands."

So, as you can probably guess, my favorite part of Ripper was the Grand Guignol-style massacre at Castle Crag and this portion of the story reminded me of the mechanical, death-trap house from John Russell Fearn's Account Settled (1949) – which also featured a number of seemingly impossible murders. Only difference is that the murders in Fearn's novel were very clean in comparison the slaughter perpetrated between the pages of Ripper.

Anyway, the Jolly Roger murders and the brutal killings on Deadman's Island turn out to be inextricably linked, which were tied together better than you'd expect from a slasher, with an ending that took its cue from The Burning Court (1937). One of the last lines ("the Hollow Man was hollow no more") really drove home that the author likes Carr.

This has left me in two minds. On the one hand, the graphic serial killer story is not my genre at all, but on the other, the plot was better than it has any right to be. Sure, this is not exactly a neo-Golden Age detective novel, but Slade effectively demonstrated here that even a guts-and-gore-type of thriller can have a degree of logic to it and this is something I really appreciated about Ripper. And the impossible crimes were the cherries that topped this pile of mutilated corpses.

On a whole, I was not entirely blown away by Ripper, but, as a genre classicist, I appreciated Slade's more traditional slant on the contemporary serial killer novel and his obvious love and respect for Carr's work. So you can expect reviews of his other locked room thrillers sometime in the future.
Geplaatst door TomCat on 6/18/2018