The Master Must Die (1953) by John Russell Fearn

Back in January, 2016, I read John Russell Fearn's The Lonely Astronomer (1954), originally published as by "Volsted Gridban," which was my introduction to the work of this astonishingly prolific English pulp writer and since then have burned through twenty of his detective novels, novellas and short stories – which were as varied in nature as the many genre's he had dabbled in during his thirty-year career. 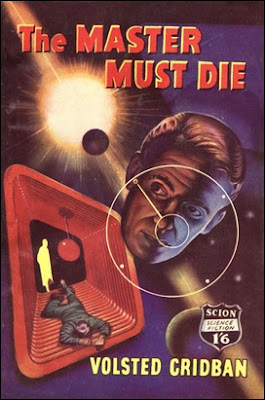 Fearn had literally turned his hand to every form of detective fiction imaginable: impossible crimes, inverted detective stories, juvenile mysteries, genre hybrids, thrillers and even an early precursor of the contemporary crime novel.

The Lonely Astronomer is "an impossible crime science-fiction mystery" and one of only two novels featuring a 22nd century scientific investigator, Adam Quirke, who's a white-maned, six-feet-nine intellectual giant prone to uncontrollable fits of laughter. A very annoying characteristic that was (thankfully) not as prominent in his first outing as it was in his second recorded case. It's this first outing that I picked as my next read.

The Master Must Die (1953) takes place in the far-flung year of 2190 and Gyron de London "one of the most powerful industrialists to ever be spewed up from the financial and industrial deeps," which made him the power behind the government of the British Federation. De London climbed to eminence over "the bodies of less of less sagacious and less ruthless people," all of them long-forgotten, but one person had not forgotten about his victims and send him a threatening letter – promising that on March 30, 2190, he would die at the hands of a sworn enemy. The letter was signed with "THE MASTER MUST DIE."

De London has "enemies by the thousand," but his suspicions run in the direction of the people from his inner circle.

Against his wishes, De London's son, Harry, has married the daughter of a high-born Englishman and an equally high-born Martian woman, named Owena Tirgard, but he intensely dislikes and distrusts Martians – descendants of the original settlers who had severed ties with their home planet and declared themselves independent from Earth. After all, the stamp on the envelope of the threatening letter was a Martian stamp. I'm not sure what surprised me more: that people were sending snail mail from Mars to Earth or that a single airmail stamp covered the cost through the variable distances and zones between the two planets.

These are, however, more suspects to consider. Miss Turner is De London's "inhumanly efficient" secretary and has "gone down the hill of acid spinsterhood" during the "sixteen grinding, pitiless years" she has worked for him. De London is very much aware that she deeply resents him and that she had recently been on holiday to Mars. Secondly, there was Rogers, De London's chauffeur and general factotum, whose father was a brilliant physical scientist who got "swindled and crushed" by the big business. Something a son would naturally resent.

So there are more than enough potential murderers surrounding the powerful industrialist and, as March 30 draws closer, De London begins to take an extreme, overly expensive measure to ensure that nothing or nobody can get to him – which includes protection from lethal cosmic rays! 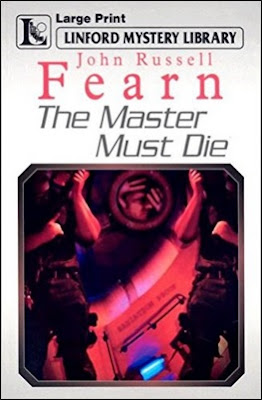 De London orders his engineers to convert half of his private-office into "a radiation-proof chamber of tungsten steel" with a lining of "a new type of lead composite" used on space ships to block cosmic radiation. A group of armed guards are stationed around this so-called "cube-room" throughout the day. De London is supposed to be untouchable within that vault-like, radiation-proof chamber, but, when he failed to reemerge from the room, they had to burn through the door. Only to find his body inside without a mark on it!

I have to point out here how similar the premise and setup of the impossible murder is to one from Christopher St. John Sprigg's "Death at 8:30," collected in Miraculous Mysteries: Locked Room Murders and Impossible Crimes (2017), but the difference between the two is that The Master Must Die has a pure science-fiction solution. An ingenious, futuristic method of killing someone inside a bare, radiation-proof room of steel that even Quirke found difficult to understand and reconstruct. So the reader has absolutely no chance whatsoever to work out the locked room trick for themselves, but the identity of the murderer was interesting. And somewhat solvable.

Usually, the murderers in Fearn's detective stories are not very difficult to spot, because he was more concerned with the nuts-and-bolts aspect of murder and probably the reason why he was so surprisingly good when it came to writing inverted detective stories – e.g. Except for One Thing (1947) and Pattern of Murder (2006). Anyway, the murderer here appeared to have presented himself on a silver platter to the reader in the run up to the murder and Quirke's discoveries, regarding the method, initially confirmed this character as the killer. By the end, Fearn settled on another character as the murderer, which was perhaps not properly clued, but this person possessed the motives, means and opportunity.

So not exactly a rug-puller of a surprise, but, after reading more than twenty of his mystery novels and short stories, I found this divergence from the usual pattern interesting. And this is really all that can be said about the plot of this very short novel.

I do want to note here the fascinating and, sometimes, hilarious fact that the vision of the future these classic science-fiction authors had primarily concerned big objects, like rockets, but rarely the small, everyday things. Fearn created a world in these two books were you can take a space liner to Mars, which has "a 3-D projected orchestra" as entertainment, but the cargo of this liner probably carried sacks of paper mail. All of them properly stamped. I also noticed this in David V. Reed's Murder in Space (1944), which takes place in a fully colonized Milky Way, but courtroom photographers still used flashbulbs!

I'm not very familiar with the (classical) science-fiction genre and this could be something primarily found in the work of the second-stringers, because I believe Isaac Asimov got a lot right. However, I find it intriguing that these early science-fiction authors were able to envision space ships, asteroid mining operations and terra-forming alien worlds, but had a glaring blind spot as to how these technologies could possibly impact and innovate normal, everyday life.

On a whole, The Master Must Die is not one of Fearn's finest detective stories or even a noteworthy entry on the list of science-fiction (locked room) mysteries, but it was a fast, fun read helped by the fact that Quirke was not half as insufferable as in The Lonely Astronomer. So this one can only really be recommended to readers who like Fearn, pulpy science-fiction or genre hybrids.
Geplaatst door TomCat on 6/09/2018