A Sniff of Crime

"(...) When we parted she was a free woman, but I could never again be a free man."
- Captain Crocker ("The Adventure of the Abbey Grange").

Back in March of 2010, "Mousoukyoku" began to record his explorations of the traditional detective story and his reports still appear at semi-regular intervals On the Threshold of Chaos. He has been focusing his attention mainly on Japanese detective fiction, but, as of late, began drifting towards the works of Ellery Queen and John Dickson Carr – which this JDC fanboy encouraged from the comment section.

Interestingly, my fellow John Dickson Carr fan-to-be prefers the more mature novels from the post-1930s period to the earlier ones, in which a Skull-shaped castle, situated on the Rhine, provides an atmospheric backdrop for a Gothic tale of revenge or a spate of hat thefts that turn out to be a prelude to a peculiar murder at the Tower of London (and involves a lost manuscript by Edgar Allan Poe). Instead, the preference is for the more sober and serious novels from the post-WWII era, in which there's more emphasis on characterization and the impossible situations tend to be a result from the actions of the characters rather then creating the illusion that it was the fulfillment of a curse or a temper tantrum of a malevolent spirit. You will therefore find more praise on his blog for She Died a Lady (1943) and Till Death Do Us Part (1944) than for the more popular novels such as The Plague Court Murders (1934) and The Hollow Man (1935). 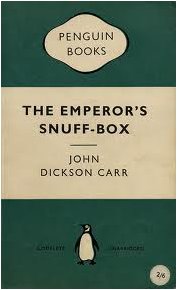 Having just thumbed my way through The Emperor's Snuff-Box (1942), often praised as John Dickson Carr’s most mature and character-driven novels, I can honestly state that I lack such a preference. I simply derive pleasure from his writing and can enjoy an atmospheric, borderline ghost story, in which an army of rats have taken custody of a disused and haunted prison, as much as a "cozy, comfortable, hearth-rug murder of the sort which almost always originates at home," however, I do think that "Mousoukyoku" underrates Carr as a writer of the macabre. Some of his books may impress readers as a tad-bit artificial, but, as Dorothy L. Sayers noted, "he can create atmosphere with an adjective, alarm with an allusion or delight with a rollicking absurdity," which is not a stock-in-trade talent among mystery writers – not even during that golden period. Like it or hate it, but only a few could compete with him when it came to conjuring up demon-haunted worlds with a few simple lines.

Anyway, I have babbled on long enough and barely mentioned the book under review today, The Emperor's Snuff-Box, which opens with the attractive Eve Neill severing her marriage ties with her charming, but lousy, husband Ned Atwood and settled down at La Bandelette – a French seaside resort where her life took an unexpected turn when she bumped into Toby Lawes.

At first, Eve and Toby have a relationship based on friendship, but before long, they hear the promise of wedding bells and their pealing sent Ned Atwood in a "flying rage" back to France – vowing in his heart to take Eve back from Toby. Eve and Ned have a tense reunion in her bedroom and from her window, overlooking the Lawes' residence, they witness how a brown-gloved hand closes a door on the battered body of Sir Maurice Lawes!

Sir Maurice Lawes was a collector and before death crossed the threshold of his study, he was immersed in his examination of a valuable snuff-box, curiously shaped like a pocket watch, which was also smashed to pieces by the murderer (note how, once again, the imagery of a clock is closely associated with death). But the shock at having been a witness to the brutal murder of her prospective father-in-law soon spirals into an out-and-out nightmare as condemning testimonies mark her as a murderess in the notebooks of the local police and the only person who can establish her innocence ended up in a deep coma.

This makes for an engrossing psychological suspense story that neatly plays a tune on one of Agatha Christie's most well-used themes, the eternal triangle, which also boasts a clever, but ultimately simple, plot – whose crafty misdirection lead me away from the murderer. I think every well-read and clued-up mystery fan will guess the murderer instinctively, but a talented mystery writer can fling the solution in your face and laugh at you as you reject it and settle on a different suspect. That's exactly what Carr did here. I also loved how Murphy's Law ran amok on the perfectly thought-out plans of the murderer, which, I think, always helps in giving a detective story a suggestion of realism. I'm not a fan of murderers who possess an almost supernatural streak of luck in timing their schemes to the second.

However, there's one thing that bothered me about the solution and this may be the books sole flaw: the murderer should've been drenched in blood after having delivered eight or nine blows to the head of Sir Maurice. You can't strike in a frenzy at someone's head and not land one or two blows in an open wound inflicted after a previous blow, which causes the splattering of blood. You have to be very calm and have a very, very willing victim to have a spatter-less battering. I would've bought it with one or two blows but not with eight or nine.

I also think Carr made a mistake when he assigned the job of detective to Dr. Dermot Kinross, a rather bland and uninteresting character, if you ask me, since this book would've been, IMHO, a perfect vehicle to reintroduce his reading audience to either M. Henri Bencolin (as he appeared in The Four False Weapons, 1937) or the alcoholic John Gaunt – whose only recorded case was in The Bowstring Murders (1933).

But those are minor imperfections in an otherwise well-written, sharply characterized and cleverly plotted detective story showing that its author was not depended on hermitically sealed environments or un-trodden fields of snow to baffle his readers.
Geplaatst door TomCat on 4/27/2012