"I tell you, Miss Sloane, the doings in this house are enough to make a monkey blush. And that was the really strange part of it, in a way. The monkey did blush..."

As a major consumer of detective stories, I must have unwittingly cultivated a deeper appreciation for stories possessing a modicum of originality, as the years that now lie behind us has filled me with the memories of the familiar tricks and tropes of the genre, which brings us without further ado to Roman McDougald's The Blushing Monkey (1953) – a somewhat unconventional locked room mystery that was nonetheless build on the fundaments of the convention country-house mystery.
The reason for picking up a copy of this book was the unconventional locked room problem that its synopsis teasingly described as a murder in an unlocked room, and it worked better than you might think! 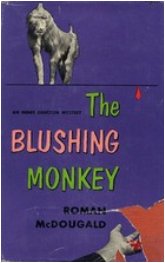 Everett Lowell is a well-heeled geezer who's getting on in years, but a persistent and infamous reputation from a tumultuous past, as an incorrigible Casanova, keeps dogging his footsteps until one day they have caught up with him. But the circumstances under which this happened are unusual, to say the least. The murderer attacked Lowell in the study, but botches a first attempt at planting a dagger between his shoulder blades (only wounding him), however, he did not grab this opportunity to escape from the room or call out for help. Even though traces of blood show that he went near the unlocked door. But why then didn’t he threw it opens and prolonged the inevitable?  A private investigator named Philip Cabot tries to ensnarl what he calls "the riddle of the unsealed room."
The gallery of possible rogues, closely scrutinized by Cabot and the police, refer several times to two men who could be aptly described as the Founding Fathers of the Detective Story, Edgar Allan Poe and Conan Doyle, but I found the central problem, concerning a door that wasn’t locked, to be much more reminiscent of the works of two of their successors, G.K. Chesterton and John Dickson Carr. On one hand you have the maddening paradox of the unsealed room and on the other a solution that cleverly reworked a timeworn trick to fit a completely new situation. I think this approach to the problem that a locked (or unlocked) door could pose alone makes it worth to the time and money spend in tracking down a copy. Well, that is, if you are a fan of these kind of seemingly impossible puzzles.
Anyway, it's not just the enigma of the room that was generously supplied with exits that's asking for a solution, but also the question asking who it was that kept piling up inches of steel in Everett Lowell's back and the house is also liberally stocked with suspects. There’s his estranged wife, Enid Lowell, and his adopted son, Mark Lowell, who seems to have began searching for his spirit at the bottom of a glass of liquor the moment his father died. Alberta Sloane is a niece from an impoverished, but respectable, branch of the family and responded to a summons from her uncle. She expected that her uncle wanted to make her his mistress, but found that he wanted to make her his sole heir. Out of protection, he claimed. He also provided a home to the novelist Lucien Cowart and his secretary Wanda Day, who reputedly slept in the beds of the father and son of the house. Lowell also employs a secretary of his own, Alex Towner, and a bodyguard named Letour. And then there's Geva, a fairly large mandrill, who was seen blushing by the housekeeper, Mrs. Critchlow, and only arouses suspicion with people who've read Edgar Allan Poe.
Not exactly a deck of cards from a game of Clue, eh? However, McDougald used the slightly twisted relationships of these gargoyles to pen a story that felt remarkable modern, even though it would be considered as pretty tame in this day and age, but it could easily pass as a modern take on the classic whodunit and the only thing that would betray its vintage is that the characters never update their Facebook status. And what's a phone with a landline anyway?
Towards the end of the book, Philip Cabot and William Kroll (of homicide) are confronted with a bone-fide murder inside a thoroughly locked and sealed bathroom. One of their main suspects is found in an overflowing bathtub with a throat-cut and a razor at the bottom of the tub. The solid door that was bolted from the inside would not budge for the better part of an hour, while blood diluted by bath water seeped from under the locked door into the hallway and the only window had a sill covered with a film of undisturbed dust. The dust naturally suggests that the Mrs. Critchlow is a sloppy housekeeper and the door that it was suicide, however, this is not a theory that is entertained very long. Unfortunately, this promising set-up missed finesse when it throws a solution at the reader that lacked inspiration. It wasn't exactly a bad explanation, but not one that blows you away or leaves you fully satisfied. The clueing with this one was also a bit iffy. I mean, how fair are unidentified smells as a clue?
Anyway, The Blushing Monkey is an interesting book, not only because it attempted and succeeded in finding a new use for one of the oldest props of the detective story, but also because it can be considered as a transitional fossil that symbolizes the passing of one era into another. The book was published in the waning years of the Golden Age and its tone, style and characters all bore the signs of a new time, but the situations that confronted this new world were the legacies from the previous one.
I hope that I have not overstated the merits of this book, but I liked what it did with the locked room problem and it managed to keep me entertained – which should perhaps be its biggest selling point.
Geplaatst door TomCat on 4/19/2012