Shed a Light On the Past: Q.E.D, vol. 3 by Motohiro Katou

Last year, I started reading the Q.E.D. series, a Japanese detective manga, created by Motohiro Katou, who produced 50 volumes between 1997 and 2014, which sold over 3 million copies and received a live-action TV drama adaptation – centering on the 16-year-old genius, Sou Touma. A former MIT graduate student who moved back to Japan, to experience life as normal high-school student, where he becomes friends with Kana Mizuhara. She's the antithesis to the lonely, withdrawn genius. 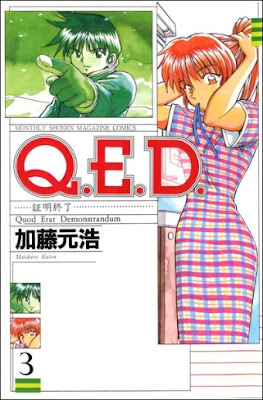 I've only read the first two volumes, reviewed here and here, but my review of the second volume dates back to a little over a year! So it was about time I returned to this series.

The third volume of Q.E.D. comprises of two stories, entitled "Breakthrough" and "The Fading of Star Map," covering three, somewhat longish, chapters each. I'm still very earlier in the series, but these two stories are my favorites as of now. And for vastly different reasons.

The first of these two stories, “Breakthrough,” is, technically speaking, not really a detective story of any kind, but fills in some background details of Touma's character and the time he spend in the US – drawing on his days as an MIT student. One day, two American MIT students turn up at Touma's school in Tokyo, Eva Scott and Syd “Loki” Green, who were friends of Touma. They were surprised and worried when he suddenly left college without a word. Everyone suspected it had something to do with the incident in the research lab.

Someone "threw Touma's thesis into the river." The thesis was supposed to be kept in the research lab, but it was taken nonetheless and "even the back-up data on the computer was erased." However, Touma doesn't want to talk about it and it's revealed that he took the blame. So was he shielding someone? The story also has a tiny sub-plot about the quasi-impossible disappearance and reappearance of a string of pearls, but these problems are only secondary to the story about the friendship between Touma and Loki. A story of two lonely geniuses who became friends and, when together, they actually act like normal teenagers and have a bit of fun. So this is really a slice-of-life story about friendship presented as a detective story. I liked it.

Sou Touma is not as popular a detective-character as Conan Edogawa or Hajime Kindaichi, but, after merely three volumes, his personality already has more depth to it than either of his more well-known counterparts – an opinion some of you will vehemently disagree with. However, Kindaichi has always been a two-dimensional character, while Conan's development slowly moves along with the red-thread running through the series.

The second and final story in this volume, "The Fading of Star Map," is a fine example of the Japanese shin honkaku detective story.

The story revolves around an abandoned, rundown star observatory, standing on a lonely, snow-capped mountain, but the place is now surrounded by a ski-resort. So the ramshackle observatory now poses a potential danger to curious skiers who might get injured as they wander around the place. Obviously, the place has to be demolished, but the observatory's founder, Fukutaro Tsukishima, disappeared twenty-five years ago and a district court investigator has gathered all his living relatives to decide "who the legal beneficiary is" – who will have to pay for the demolition. Someone accidentally opened the giant telescope and it revealed the charred remains of a long-dead person.

Naturally, a snow storm delays the arrival of the police and, shortly after the discovery, Sou Touma and Kana Mizuhara arrive at the observatory. They're on a school trip, to the ski resort, but they got lost and were brought to the observatory. Where they have to spend the night.

On the following morning, they find the body of Fukutaro's brother-in-law, Muneaki Miyabe, hanging outside the bathroom window. This turns out to be a cleverly contrived, quasi-locked room murder showing that the Japanese are not only the masters of the corpse-puzzle, but understand the endless possibilities of the architectural mystery like no one else. A wonderful trick that could have been fleshed out into a full-fledged locked room conundrum. However, even better than the trick is the identity of the murderer and the clues that were found in the stars, an old drawing of a dog and the cruel lies adults tell to children. The murderer is a truly tragic figure, but, even more tragic, is the death of this character.

If you're going to kill off the murderer at the end of the story, this is how it should be done with exactly right emotional punch to punctuate the ending. A highly recommendable story.

So, all in all, this was an excellent, well-balanced volume with a character-driven and plot-oriented detective story, which both showed improvement in characterization, plotting and story-telling. I might tackle the next two volumes in the coming weeks, because two volumes a years is simply not enough.

By the way, I know only a tiny segment of my regular readers actually read and watch anime-and manga detective series, but I like to know what you uninitiated think when you read these reviews. Are you intrigued? Tempted? Why don't you take the plunge? You'll find some of the cleverest detective stories you have ever read in these series. And they're banquet, if you're a locked room fanboy. For example, I think the Detective Conan episodes The Case of Séance Double Locked Room and The Cursed Mask Laughs Coldly are modern classics of the impossible crime genre.
Geplaatst door TomCat on 7/04/2019