The Case with Nine Solutions (1928) by J.J. Connington

"J.J. Connington" was the pseudonym of Professor Alfred W. Stuart, a Scottish chemist and lecturer, who produced close to thirty mystery novels over a twenty year period with his series-detective, Sir Clinton Driffield, starring in seventeen of them – fulfilling the role of Chief Constable of a fictitious county. The books garnered critical acclaim from such luminaries as Jacques Barzun and T.S. Eliot. John Dickson Carr praised Connington in his famous 1963 essay "The Grandest Game in the World" (collected in The Door to Doom and Other Detections, 1980). 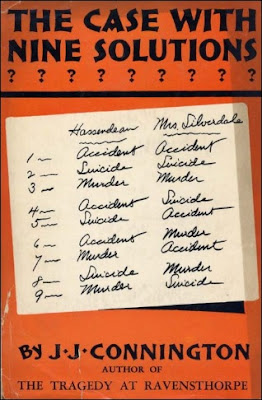 I had read only two of his mystery novels, Murder in the Maze (1927) and Jack-in-the-Box (1944), which bristled with promise, ingenuity and originality. But my third read in this sadly neglected series turned out to be a minor masterpiece.

The alluringly titled The Case with Nine Solutions (1928) is Connington's sixth detective novel, but only the third title in the Sir Clinton Driffield series. Nonetheless, Sir Clinton here's at the top of his game as he delves into a bizarre, quadruple murder case to which there are nine possible solutions. So let's dig in!

The Case with Nine Solutions opens with Dr. Ringwood, who's working locum for the sickly Dr. Carew, but a localized flu epidemic has prevented him from having as much as two hours of continuous sleep – concluding that "general practice is a dog's life." So an unexpected social call from a colleague, Dr. Trevor Markfield of the Croft-Thornton Research Institute, is a welcome distraction from his workload. Until the "stifled malediction" of the telephone bell summons him to the home of Dr. Silverdale.

However, the town of Westerhaven is draped in a thick fog and Dr. Ringwood, who's new to the place, has no idea how to find the place.

Dr. Markfield kindly offers to shepherd Dr. Ringwood to the Silverdale home and they tailgate through the dense fog, but, in spite of his guide, Dr. Ringwood enters the wrong house and makes a terrible discovery. A fair-haired young man lying mortally wounded on a chesterfield in the smoking-room. He has two bullet wounds and the last thing Dr. Ringwood hears him mutter is "...caught me... pistol... shot... thought it was... all right... never guessed." Dr. Ringwood immediately notifies Sir Clinton and then attends to one of the sick maids next door, but when he returns to Silverdale home with Sir Clinton, they find the body of the maid who had admitted the doctor to the house on his earlier visit. She had been strangled "pretty efficiently" with a homemade garroter.

The dead man is identified as Edward Hassendean, "the cub who was hanging round the skirts of Silverdale's wife," Yvonne, who kept the hopeful young man "on her string for her own amusement," but don't waste your sympathies on young Hassendean – because Sir Clinton's excellent detective work reveals he got his just desserts. In any case, this double murder already looks like it's going to be a lot of trouble, but then Sir Clinton receives an anonymously send telegram (signed "Justice"). The message brings them to an empty bungalow where they find the body of Mrs. Silverdale sitting in a big arm-chair with a bullet wound in her head and an automatic pistol lying at her feet. However, the cause of death is hyoscine poisoning!

As noted above, Sir Clinton is in superb form here and makes some excellent deductions leading to the conclusion that the bungalow was the primary stage of two of the three murders. A conclusion that somehow makes the case both simpler and more complicated at the same time.

Sir Clinton tells Inspector Flamborough that "deaths by violence fall under three heads:" accident, suicide and homicide, which includes murder. There were two violent deaths at the bungalow and "in each case the death must have been due to one or other of these three causes." If you take one or two of these three possible ways as the cause of Hassendean and Mrs. Silverdale's deaths, there are "nine different arrangements" (see table). You shouldn't read The Case with Nine Solutions expecting to find something along the lines of E.C. Bentley's Trent's Last Case (1913), Anthony Berkeley's The Poisoned Chocolates Case (1929) or Ellery Queen's The Greek Coffin Mystery (1932), because the titular solutions are understandably nothing more than possibilities – although a detective novel with eight false solutions would have been amazing! Nevertheless, Sir Clinton competently distills the truth from these nine possibilities by being observant enough to spot the differences between the real and manufactured clues.

The Case with Nine Solution has a truly brilliant plot unhampered by the narrow "circle of inquiry," which comprises of only two or three viable suspects, but, even if you spot the murderer, you're still left with explaining what exactly transpired. An apparently incomprehensible sequence of events that turned out to have an ultimately simple explanation effortlessly reconstructed by Sir Clinton. And this is topped by the final chapter, "Excerpts from Sir Clinton's Notebook," which shows you all the clues you might have missed. Why have I been neglecting Connington for so long?

Patrick Ohl, of the still dormant At the Scene of the Crime, observed in his 2011 review that you can see some of Connington's influence in Carr's work, "particularly the impressive reconstructions of Dr. Gideon Fell," but The Case with Nine Solutions brought the bewildering crime from Carr's The Four False Weapons (1937). If I remember correctly, there's some passing plot-resemblance between them.

Equally interesting, Connington also seems to have left his mark on the work of another personal favorite of mine, Christopher Bush, whose The Case of the Tudor Queen (1938) was very likely inspired by The Case with Nine Solutions. The Case of the Tudor Queen also concerns a double death in an empty house, which could have been either murder, suicide or a combination of the two. And in both stories, the female victims are found poisoned, sitting in a chair, in an empty room. Not to mention Bush's fondness of these confusing, closely-concurring multiple murders during his early days as a mystery writer (e.g. Dead Man Twice, 1930).

So, a long story short, The Case with Nine Solutions proved to be an cleverly structured, fairly clued and solid plotted detective novel with a simple, but satisfying, solution to a confusing and seemingly inexplicable string of murders – which makes it a minor classic. On top of that, it appears to have influenced two of my favorite mystery writers. You can expect this book to make an appearance on my best-of list of 2019 and I won't wait until 2020 to return to Connington, but my next stop is going to be one of those delightful Japanese locked room mysteries. So stay tuned!
Geplaatst door TomCat on 7/19/2019