The Case of the Fourth Detective (1951) by Christopher Bush

The Case of the Fourth Detective (1951) is the thirty-ninth mystery novel about Christopher Bush's intelligent and urbane series-detective, Ludovic Travers, who started out as a bespectacled meddler with amateur status, but has slowly transitioned into a genteel private-investigator with a license – a change influenced by the American school of hardboiled crime fiction. A change that began with a shift to first-person narration (The Case of the Kidnapped Colonel, 1942) and was completed with Travers becoming the owner of the Broad Street Detective Agency.

Travers came into his new position when the previous owner of the agency, Bill Ellice, unexpected died from a heart attack.

The Case of the Fourth Detective begins when a prospective client, Owen Ramplock, calls the agency and his call is taken by a former Chief Inspector of Scotland Yard, Jack Norris. Ramplock is interrupted and Norris hears him say, "Prince... what the devil are you doing here?" Several months before, Travers had met Ramplock on the golf course and decides to go Warbeck Grove, a block of palatial flats, but when he arrives, he finds Ramplock lying on the floor of Flat 5 – "deader than last year's hit-song." A visiting card of Mr. A.W. Prince is found in the pocket of the body with a bold warning printed on the back, "You'll Be Sorry."

Owen Ramplock is the second generation chairman of Ramplocks, a chain of thirty-four provision shops, which he inherited from his late father, Old Sam Ramplock. However, his son proved to be a poor replacement.

Ramplock could be charming in his "own peculiar way," but being head of Ramplocks had inflated his ego and has become "impatient of advice" and "contemptuous of protests." And his personal life was not exactly spotless either. So they have to unsnarl a tangle of personal and private motives to get to the murderer. There's no shortage of suspects.

There's the evasive Mr. A.W. Prince and his equally elusive motive. A mysterious black-haired woman who appeared to have Ramplock's secret lover and regularly visited his private flat, but nobody seems to know who she is. There's his estranged wife, Jane Ramplock, who first refused to divorce him and than flat-out refused to take him back, because someone can hurt "a person even quite a lot" and "then they do just something else" – at once "everything's changed." She refuses to tell Travers what has changed. The last potential suspect on the home front is Jane's delightful uncle, Matthew Solversen, may well have been modeled on E.R. Punshon (see Curt Evans introduction).

On the "Big Business" side of the murder, there are the people working at Ramplocks: Henry Dale (manager director), Charles Downe (chief accountant), Miss Susan Haregood (secretary), Richard Winter (sales) and the company typist, Daisy Purkes. None of them were too happy with Owen Ramplock succeeding his father. 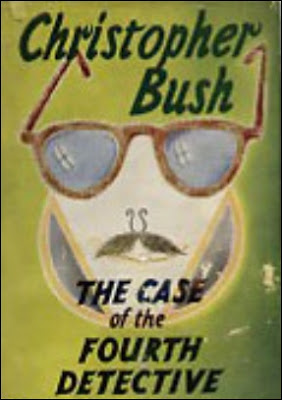 Essentially, The Case of the Fourth Detective is a relatively simple, uncomplicated and straightforward detective story. You have a body surrounded by a group of suspects with motives and those pesky alibis, which are either watertight, incomplete or non-existent. Answers to all the questions posed here perfectly demonstrates Bush had moved on from those elaborate, intricate Golden Age baroque-style plots of the thirties with precise, minutely-timed alibis (e.g. Cut Throat, 1932) and even the occasional impossible crime – e.g. The Perfect Murder Case (1929) and The Case of the Chinese Gong (1935). However, the solution here was uncomplicated simple and can even be called it slightly uninspired. Even the alibi-trick was child's play compared to the earlier titles in the series.

However, The Case of the Fourth Detective is, in spite of its simplistic plot, not too bad a mystery novel, but one that mainly draws its strength from its depiction and use of the post-war malaise in Britain. A country where food rationing continued until July, 1954!

Ramplocks is plagued by shortages, war damage claims, rising overheads, labor troubles and "the devil knows what." Not to mention "the ravishing inheritance tax" (a.k.a. death duties). Old Sam had "enough salted" to pay for the inheritance tax when he passed away, but, with the murder of Owen Ramplock, they once again have to cough up those death duties. And scramble to find a way to raise the money. Two solutions that are constantly mentioned is either selling out or selling shares publicly to cover the cost, which would turn the family company into a public one and is fate shared by many companies – such as the "remarkable newsstand and bookstall empire," W.H. Smith and Son. This casts a gloomy, somber and even depressing shadow over the story. Something you can find in other British mysteries from this period. Cyril Hare's When the Wind Blows (1949) and Leo Bruce's Cold Blood (1952) immediately come to mind.

So, all in all, the plot of The Case of the Fourth Detective is a little simple when compared to the earlier entries in the series, but the financial and social upheaval of post-WWII Britain offers a fascinating backdrop, to say the least. As was how these changes affected the murder of Owen Ramplock. However, if you're new to the series, I advice you to begin at an earlier point in the series, because this one will only be appreciated by seasoned Bush readers.
Geplaatst door TomCat on 7/13/2019