Last year, I tackled the first two parts of Paul Doherty's historical "Telamon Triology," The House of Death (2001) and The Godless Man (2002), which takes place in 334 BC and follows the tribulations of a talented young physician, Telamon – who's the trusted confident of his boyhood friend, Alexander the Great. Alexander and Telamon were raised together, as boys, "in the Grove of Mieza at Aristotle's academy," but Alexander's god-like aspirations ensures an endless supply of challenges for the level-headed physician. 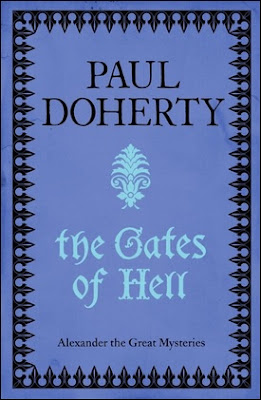 The red-thread running through this trilogy is the escalating war activities between Macedon and the sprawling Persian Empire of Darius III.

Alexander has captured or sacked city after city and has crossed into Asia, but Darius III and his menacing spy, Lord Mithra, have been plotting his downfall and even enlisted a Greek mercenary, Menno of Rhodes. One of the few generals to have defeated Macedonian troops in battle. Persian assassins and spies have been active in Macedonian army camps (The House of Death) and captured cities (The Godless Man), which resulted in a bloody trail of revenge, intrigue and miraculous murders dragged across Alexander's marching route "to the edge of the world" – solved by the agile mind of Telamon. Lion of Macedon was now poised to take "the great prize."

The Gates of Hell (2003) is the final book of the "Telamon Triology" and Alexander has set his sight on the city of Halicarnassus with its deep harbor on the Aegean. If the city falls, every sea port on the Aegean will be Alexander. Something that's easier said than done.

Halicarnassus is well fortified with "towers, walls and citadels" with its southern line "protected by the sea and the Persian navy." A moat has been dug around the city "twenty-five feet broad and very deep," which Alexander has to cross before he can attack the walls, but the conditions outside the walls are extremely unfavorable to an invading army and it's "almost impossible to mine underneath" – making the city practically unconquerable without an Archilles' Heel. Well, if a legend is to be believed, there's a weak spot in the city's defensive bulwark.

Pythias was a sour, embittered, but brilliant, mathematician who claimed King Pixadorus, of Halicarnassus, had "cheated him out of certain treasure," but Pixadorus dismissed these accusations as nonsense. After a while, the king grew tired of accusations and threatened to seize Pythias' wealth. So he fled the city, but left behind a cipher, known as the Pythian Manuscript, which revealed both where the treasure was hidden and "an intrinsic flaw" in one section of the city wall. A "terrible weakness" any besieger could exploit. Alexander is in possession of the cipher!

Pamenes is a skillful scribe "versed in translating secret codes and ciphers," who's one of scholars laboring on deciphering the Pythian Manuscripy, but he has not emerged from his room. A room known as the Ghost Chamber with creaking floorboards that has inspired ghost stories, but sadly, nothing is done with the room. Anyway, the creaking floorboards is how people in the room below heard the scribe pacing up and down. However, the door remained bolted and there's no answer to the knocking. So the door is battered down and the body of Pamenes is found on the pavement outside, under the open window, with bird seed scattered around him, which suggests an accidental fall, but Telamon suspects foul play – begging the question how a murderer was able to enter or leave a locked room. This is not the only (quasi) impossible situation in the story. 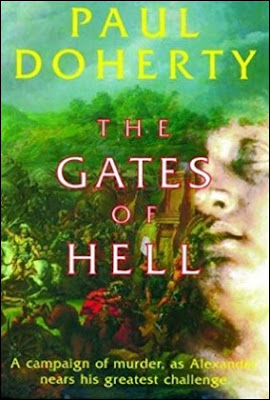 Alexander and Telamon believe there's a spy in their camp who, somehow, has found a way to dispatch incredibly detailed messages with "a richness of information" into the besieged city. The messages must have been incredibly detailed that it's very unlikely, if not impossible, someone shot an arrow with a message attached to it over the city wall.

Doherty has never been squeamish about padding the body count of his stories and The Gates of Hell is no exception.

A cook and his daughter are poisoned. A Cretan archer is murdered a mile from Alexander's camp and the murderer took his bow and arrows. A woman is found strangled to death in the Ghost Chamber, which appeared in the room after it had been searched. This all takes place against the bloody siege of Halicarnassus. Needlessly to say, this really pads the body count of the book and that's not even counting a number of executions.

So this makes for a very eventful and exciting story full with epic battles, spy activities, ciphers and bloodshed, but Doherty is at his best when seamlessly intertwines historical events with the detective story and The Gates of Hell fell a little short of the mark – because there was only one plot-thread that delivered. The method the spy used to dispatch detailed information to the besieged city was beautifully simple. And neatly linked to the cipher. I suppose the cipher could be a good second, if the average reader actually stood a chance at solving it.

However, the solution to the locked room murder of Pamenes was disappointing. I would have been happy with something half as clever as the impossible fall from the locked tower room in A Murder in Thebes (1998), but this locked room-trick was uninspired. It didn't help that the clueing was sparse and the main culprit stood out like a sore thumb.

The Gates of Hell is strong on historical content and a fine example of Doherty's talent to write mystery novels as historical epics, brimming with historical battles, events and figures, but this time with a very middling plot – ending the Telamon Triology on a weak note. So not one of Doherty's most successful historical mysteries.
Geplaatst door TomCat on 7/16/2019