The Clue at Skeleton Rocks (1932) by Hugh Lloyd

Percy K. Fitzhugh was an American writer who published close to a hundred boy scout novels, comprising of a handful of distinctly different scouting series all set in the fictional town of Bridgeboro, New Jersey, which were very popular with both children and adults – contributing greatly to the growth and popularity of the Boy Scouts in the U.S. Reportedly, there were thousands of boys who joined the scouts "because of his writing." 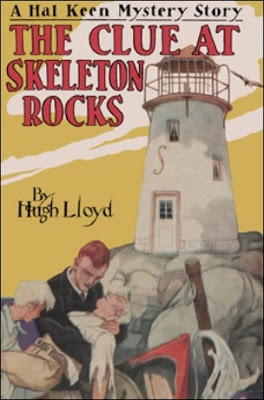 During the early 1930s, Fitzhugh's popularity began to decline and decided to turn his hand to the juvenile detective story.

Between 1931 and 1934, he adopted the penname of "Hugh Lloyd" and produced ten volumes about Hal Keen. A tall, red-headed youth whose uncle, Denis Keen, is an agent for the Secret Service Department and functions as the plot-device that allows Keen to have adventures all over the world as the book-titles testify – e.g. Kidnapped in the Jungle (1931), The Lonesome Swamp Mystery (1932) and The Lost Mine of the Amazon (1933). However, the Hal Keen books are very different from most juvenile mystery series that have been discussed on this blog. Very differently.

A distinguishing characteristic of Fitzhugh's writing is realism. This is why so many of his scouting novels bore "the official seal of approval of the BSA" and regularly received fan mail addressed to his various Boy Scout characters.

Fitzhugh's adherence to realism resulted here in a more mature, but darker, series closer to Peter Drax and George Bellairs than William Arden or Bruce Campbell. As one reviewer noted, "people are not only killed," but they are murdered and have "a noir feel" without having urban settings. I agree. Another notable difference is the age of Hal Keen. I assumed Hal was somewhere in his late adolescence, between 17 and 19, but a late chapter revealed he was a "young man of twenty-one."

So this series promised to be something out of the ordinary and decided to sample it with the seventh title.

The Clue at Skeleton Rocks (1932) begins with a wrecked schooner, Sister Ann, which has struck the reef at Skeleton Rocks, Maine, where one of those "lonely, wave-swept lighthouses" stands and this immediately begs the question – why was the ship wrecked so close to the light? And what happened to the crew? Secret Service in Washington believes the wrecked schooner was none other than an old smuggling vessel, Isle of Tortuga, which carried opium. So this brings Denis Keen to Skeleton Rocks. And he brought along his nephew, Hal.

Captain Dell of the lighthouse tender, Cactus, tells them nothing thrilling has happened on Skeleton Rocks in more than forty years, but one of the two lighthouse keepers, Bill Hollins, had committed suicide on the night Sister Ann ran up the reef. These events turned the hair of the other keeper, Edgar Barrowe, white over night and his behavior became even more peculiar than usual. And than there's the man who Hal saved from drowning, Danny Sears, who vanishes at the first opportunity he got. This won't be the last time Sears made a sudden entrance and exit. 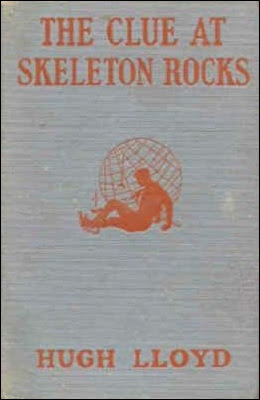 Denis Keen described his nephew as someone who "invites trouble" and, when it doesn't come, "he just goes looking for it." Hal decides to stay behind on Skeleton Rocks to spend his Easter holiday as a lighthouse keeper's apprentice, but he really wants to figure out what happened on that fateful night and befriends "the orphaned half-wit," Dillie Rawson – who was very close with Hollins. Hal also finds the time to fall in love with the daughter of the doctor from the nearby Porthmouth, Elissa.

Unfortunately, this is all I can tell you about the plot of The Clue at Skeleton Rocks, because the plot is paper-thin and has an infuriating explanation breaking one of the cardinal rules of detective-fiction.

I already mentioned how Lloyd's realism and writing-style reminded me of Bellairs and Drax, but have only read one novel by each of them, High Seas Murder (1939) and The Cursing Stones Murder (1954). Nonetheless, they have more than one thing in common with The Clue at Skeleton Rocks. All three are darker, moody crime stories with a shipping background, minimalistic plotting and a lack of any meaningful detective work. Sure, you have the titular clue, but, since the murderer's identity is draped in a layer you can never peel away, until it's revealed, the clue is rendered completely useless.

All things considered, The Clue at Skeleton Rocks is an interesting curiosity, to be sure, but failed hard as a genuine detective story and was perhaps a little bit too much on the darker and serious side to be considered a juvenile mystery – which makes this curiosity only recommendable to the curious. If you're one of those curious-minded, I have some good news. The previously mentioned The Lost Mine of the Amazon is available on Gutenberg, but I'll be giving the rest of the series a pass.

And if you want to try some genuinely good juvenile mysteries, you should track down one of these titles: J. Jefferson Farjeon's Holiday Express (1935), Martin Colt's Stranger at the Inlet (1946), Manly Wade Wellman's The Sleuth Patrol (1947), Enid Blyton's The Mystery of the Invisible Thief (1950) Bruce Campbell's The Clue of the Phantom Car (1953), Robert Arthur's The Mystery of the Whispering Mummy (1965) and William Arden's The Mystery of the Shrinking House (1972).
Geplaatst door TomCat on 7/02/2019