John J. Hurley was an American writer who worked as a newspaper reporter for the Bridgeport Post Telegram and as an advertising executive, but during the 1970s, he began to prolifically write short stories for Alfred Hitchcock's Mystery Magazine and Ellery Queen's Mystery Magazine – published under the name of "S.S. Rafferty." Over a ten year period, he produced more than fifty short stories and most of them starred either one of his two series-detectives, Chick Kelly or Captain Jeremy Cork.

Chick Kelly is a New York night-club comedian and amateur detective, who appeared in eighteen stories and one collection (Die Laughing and Other Murderous Schtick, 1985), but his most successful detective-character was Captain Jeremy Cork. 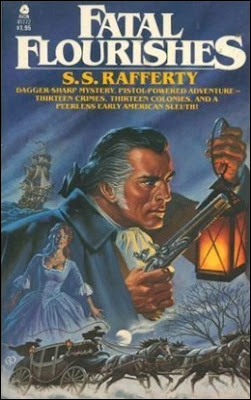 Captain Cork is an 18th century businessman in colonial America (1625-1775) who delights in picking apart so-called "social puzzles." An unproductive activity his yeoman and narrator, Wellman Oaks, labeled "non-lucrative excursions into the solution of murder, mayhem, and other forms of criminal skulduggery," which didn't stop him from writing down thirteen of Captain Cork's cases – each story taking place in one of the thirteen original colonies. All of the stories were collected in Fatal Flourishes (1979) and reissued five years later under the title Cork of the Colonies.

The series began ambitiously with "Murder by Scalping," originally published in July, 1973, issue of EQMM, which was listed by Robert Adey in Locked Room Murders (1991). The story brings Captain Cork and Oaks to the Rhode Island ranch of Squire Norman Delaney.

On their third evening at the ranch, the Squire tells Captain Cork how crime is practically undetectable in the colonies, because many of the foul deeds committed along the frontier were "entered in life's ledger as accidents." People who were assumed to be lost on the trail or taken by Indians. So what stands in "the criminal's way in these rude climes?" Captain Cork's answer: "I do." And his words are immediately put to the test.

Goodman Stemple is the owner of a prosperous trading post, Stemple's Redoubt, who comes to the Squire with the startling news that his future son-in-law, Donald Greenspawn, was killed and scalped in his own home! Now there's talk among the frontier folk about raising "a punitive expedition" against the Tedodas.

Interestingly, the seemingly impossible murder of Greenspawn is constructed around the colonial custom of bundling.

Greenspawn had agreed to take Stemple's daughter, Faith, in marriage and during their period of courtship, they bundled by sharing a bed fully clothed and protected from temptation by a wide, wooden bundling board between them. This had quite a practical reason. During the day, the time of the couple is entirely consumed by work and chores, which only leaves the evening for a private conversations and this sleeping arrangement is preferred during the winter – because cabins on the frontier usually only have one fireplace. Rafferty astutely saw the possibilities for an impossible crime.

On that morning, Faith awakened to find Greenspawn dead in his side of the bed with his head caved in, his scalp gone and covered in gold dust. The room had been closed and a house guest, Vicar Johnson, was stricken with gumboils and had been unable to sleep. So, to pass the time, spent the night reading and he said nobody entered or left the room except for Donald and Faith. Only the persons who could have killed him were either Faith or "an Indian who could walk through walls."

The solution to the murder is a clever little variation on a locked room-trick from a rather well-known impossible crime novel and the basic idea even predates that story, but it has never been used with these, uhm, tools before – resulting in a darkly humorous locked room situation. Leo Bruce or Edmund Crispin could have spun comedic gold out of this idea!

Unfortunately, the who-and why or the murder are not as well handled as the how and disliked the sudden ending. After visiting the scene of the crime, Captain Cork picks the murderer from the crowd or people standing outside the cabin. You're never given a clue or even as much as a hint to the solution. Or how he reached that conclusion. And, no. Not even the gold dust on the body constituted a clue, which had an answer that completely came out of nowhere. This made Captain Cork come across as an oracle, rather than a detective, when delivering the solution.

"Murder by Scalping" marked the debut of both S.S. Rafferty and Captain Jeremy Cork, which comes with the imperfection one expects to find in an unpolished writer, but the story has a good historical setting with an original application of an old locked-room-trick – resulting in a memorable impossible crime. So readers of historical mysteries and impossible crime fiction are most likely to appreciate this short detective story.
Geplaatst door TomCat on 7/07/2019