Back in March, the modern-day prospectors of Golden Age mysteries, Dean Street Press, reissued three classic, but obscure, detective novels by a forgotten husband-and-wife writing tandem, E. and M.A. Radford – who were big proponents of the fair play principle. As they demonstrated in their very early Murder Isn't Cricket (1946). A detective story littered with challenges to the reader, clues and a clue-finder. 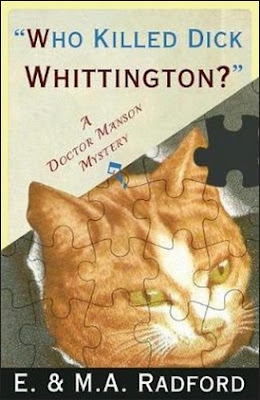 Who Killed Dick Whittington? (1947) is the Radfords sixth mystery novel and one of three titles Dean Street Press selected for reprinting, which were picked on the strength of their "strong plots, clever detection" and "evocative settings." Nigel Moss noted in his introduction that these three titles also present an attractive portrayal of their series-detective, Dr. Harry Mason.

A portrayal showing a combination of powerful intellect, reasoning and "creative scientific methods of investigation," but never “losing awareness” and "sensitivity concerning the human predicaments encountered." A scientific police detective for the modern age!

You can find all these qualities within the pages of Who Killed Dick Whittington? A fine example of the theatrical mystery, plotted around the popular Christmas pantomime Dick Whittington and His Cat, which here provides a stage for a bewildering murder – one that initially appeared to be utterly impossible. However, this is not an impossible crime story in any shape or form.

Henri de Benyat theater company is performing the pantomime Dick Whittington at the Pavilion Theatre, Burlington-on-Sea, with Miss Norma de Grey as the Principle Boy playing Dick, but Miss De Grey is famously unpopular backstage. De Grey "resented applause" except when "it was directed towards her own performance" and went as far as having gags or verses cut which gave other members "more applause than she herself received." So there's more than one members of the theatrical company who daydreamed about wringing her neck.

Dick Whittington and His Cat has a well-known scene, known as the Highgate Hill scene, in which Dick and the Cat take a nap on a mossy bank by the milestone on Highgate Hill. And dreams of the Bow Bells "Turn Again, Whittington, Lord Mayor of London."

During the performance, Miss de Grey misses her lines and doesn't stir from the mossy bank. Someone else shouts her lines, the curtain comes down and they rushed to the bank, but Miss De Grey has passed away and the doctor has some dire news – she died from "a dose of prussic acid." The post mortem reveals the poison had been injected with a hypodermic syringe and the only person who could have done it is the man who played the Cat, Jimmy Martin.

However, the Cat is found poisoned and on the brink of death in his dressing room. This gave the murder the initial appearance of an impossible crime, but this is illusion dispelled before the halfway mark. Nevertheless, the local police are getting nowhere and decide to call in the Yard.

Detective-Inspector Harry Manson, head of the Forensic Research Laboratory, is called in, but, while looking into the murder, he also investigates a secondary case. A firebug who's setting fires to dress shops, warehouses and antique stores with stock of "a peculiarly inflammable nature." Resulting in a total loss of inventory and high insurance payouts. This fire-raising case features some of the most satisfying scientific detective work since R. Austin Freeman's Dr. John Thorndyke solved crimes through science in Victorian-era England! Which is not all that surprising. Edwin Radford was "a keen admirer of the popular Dr Thorndyke." I wonder if he had also read the early forensic mysteries by Eric Wood (c.f. Death of an Oddfellow, 1938).

Dr. Harry Manson visits the scenes of the fires to collect samples, such as portions of charred wood, soot and ash, which are analyzed and revealed that the fires were no accidents, but the key piece of evidence are traces of "a curious metal" – which is exceedingly rare in Britain. Showing in the end how only one person in the whole country could have had a hand in the fires. Dr. Manson also engages in some good, old-fashioned detective work in the Dick Whittington murder case.

Most notably, Dr. Manson deduces that two items were taken from a dressing room and the reader is challenged to figure out what these two missing items are. Naturally, he finds a link between the murder of Miss Norma de Grey and the fires. Nearly everything, except for the motive, fitted nicely together.

Who Killed Dick Whittington? is a fascinating, highly successful merger of the sophisticated theatrical mysteries of Ngaio Marsh with the scientific detection of the Dr. Thorndyke series. The result is a satisfying detective novel that was even better than Murder Isn't Cricket. So expect a review of the third reprinted title, Murder Jigsaw (1944), sometime in the future.

I hope Dean Street Press decides to reprint more by the Radfords, because they have written some intriguingly-titled detective novels with equally intriguing premises: Death of a Frightened Editor (1959), Murder of Three Ghosts (1963), Murder Magnified (1965) and Death of an Ancient Saxon (1969).
Geplaatst door TomCat on 7/10/2019