Back in March, I reviewed a short parody story by Jon L. Breen, entitled "The Problem of the Vanishing Town" (1979), which satirized one of Edward D. Hoch's most popular and unforgettable series-characters, Dr. Sam Hawthorne – a country physician who's a magnet for seemingly impossible crimes. Breen littered his parody with passing references to unrecorded locked room problems that have taken place in the small New England town of Northsouth. 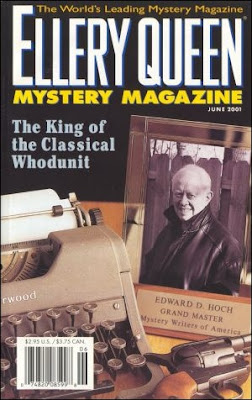 One of these references was to the inexplicable murder of a circus clown, who was mauled to death by "a lion on the fifth floor of the Northsouth Hotel," but "the lion was in his cage five blocks away." The idea behind these references was to describe a situation so utterly impossible that "no one could possibly solve it rationally." Twenty years later, Hoch found a solution to the problem and worked it into a short story.

"Circus in the Sky" was originally published in the anthology Scenes of Crimes (2000) and reprinted in the June, 2001, issue of Ellery Queen's Mystery Magazine.

The story is narrated by a computer programmer in his mid-twenties, whose name we never learn, working for a month in an unfamiliar city far from his home office and decides to kill a boring evening by going to circus – which no longer played "in big tops set up along the railroad tracks in cities like Omaha and Des Moines." A big circus were now arena events competing rock stars, ice shows and professional wrestling for the best dates.

After the show ended, the narrator goes to a late-night restaurant to have a drink and strikes up a conversation with the female lion tamer the Breen Brothers Circus, Mimi Gothery, whose stage-name is "Carpathia." They're interrupted by two policemen who request they accompany them to the seventeenth floor of the office building across the street. The body of a lawyer, Richard Strong, had been found in his high-rise office with his face and suit "shredded by bloody claw marks" as if "a lion had appeared from nowhere," lashed out violently, "and then vanished."

Richard Strong was "one of the business acting as clowns" at that night's performance, which is done for charitable or promotional reasons, but, during the lion tamer's act, he attempted to push some flowers on Carpathia. And he was brushed aside. However, the narrator is her alibi and the physical evidence is on her side, but it makes the murder look even more impossible than it already did.

The police matched the claw marks on the body with the paw of one of Carpathia's lions, Gus, but nobody believes she walked around that night with "a lion on a leash" and there are two witnesses, circus owner and a stable boy, who swear Gus was in his locked cage after his performance – either one or the other was around the lion's cage the entire night. So nobody could have taken him out of the cage to commit a murder in a very dangerous and roundabout way.

Breen has admitted he has no earthly idea how to explain the miracle problem he had posed in "The Problem of the Vanishing Town," but Hoch explained the conundrum of the invisible lion with a devilish ease with all clues you need to figure it out yourself (I did!). More importantly, the simple, down-to-earth explanation didn't fell flat coming on the tail-end of such a fantastical premise. You can almost describe "Circus in the Sky" as a Clayton Rawson impossible crime story ("Claws of Satan," 1940) as perceived by John Dickson Carr (The Unicorn Murders, 1935). And the fact that the central puzzle started out as a throw-away joke in a parody of Hoch added another layer to the overall story.

So, all in all, Hoch's "Circus in the Sky" is another one of those impossible crime stories baffling absent from any of the locked room-themed anthologies published during the last two decades, but anthologists should keep it in mind for potential future anthologies. This short story is vintage Hoch and shows why he was the flesh-and-blood incarnation of the American detective story (after Ellery Queen, of course). Highly recommended!
Geplaatst door TomCat on 7/28/2019