The Laughing Cure: "The Problem of the Vanishing Town" (1979) by Jon L. Breen

A week ago, I reviewed Edward D. Hoch's Challenge the Impossible: The Final Problems of Dr. Sam Hawthorne (2018), which is the last collection of short stories about a retired New England medico, Dr. Sam Hawthorne, who begins every story with pouring a small libation before telling about one of the innumerable impossible crimes that plagued Northmont in the past – a small American town and locked room murder capital of the world. So with the publication of Challenge the Impossible there was nothing left to read in this series. Or is there? 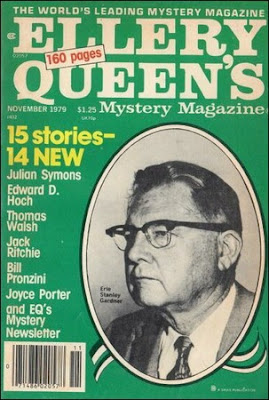 Jon L. Breen is an award-winning mystery critic who took over The Jury Box column in Ellery Queen's Mystery Magazine (hereafter, EQMM) from John Dickson Carr in 1977 and relinquished the column in 2011 to Steve Steinbock, but Breen is more than just a critic. Over the decades, Breen has penned over a 100 short stories and garnered a reputation as a "premier parody-pasticher" as he satirized his illustrious predecessors and contemporaries alike. Some of his parodies have been collected in Hair of the Sleuthhound (1982) and The Drowning Icecube and Other Stories (1999).

The Giant of the Short Story was not exempt from a friendly ribbing at the hands of Breen and in the November, 1979, issue of EQMM he aimed "the point of his pen at one of the favorite series characters in EQMM," Hoch's Dr. Sam Hawthorne.

"The Problem of the Vanishing Town," subtitled "A Chapter from the Memoirs of Dr. Sid Shoehorn, New England General Practitioner," takes place in the small town of Northsouth. A quiet, peaceful place where nothing ever happens except the absolute impossible. An inebriated Dr. Shoehorn begins his tale with relating some of the unholy miracles that have taken place in Northsouth and they're gems.

One day, "the public library disappeared overnight," leaving behind a vacant lot, but the disappearance was "a publicity stunt on the part of the librarian," who are "a militant lot," to protest budget cuts – she put it back the next day. Obviously, this story takes place in the same universe as Douglas Adams' The Hitchhiker's Guide to the Galaxy (1979). A second incident that livened up a pleasantly dull Northsouth summer when an old man, Noah Zark, who claimed he was 2000 years old "challenged the Devil to a duel in the middle of the town square." But he was run through with "a pitchfork that came out of nowhere" in "full view of more than a hundred people." Why has nobody attempted to turn this premise into an actual story?

"The Problem of the Vanishing Town" takes place on a day in late August of 1928 and Dr. Shoehorn had delivered triplets that morning, attended to "a case of the black plague" and learned Sheriff Aperture got a telephone message saying that at three o'clock that afternoon "the whole town of Northsouth will disappear from the map." So they have to figure out how someone can make a whole town disappear.

I'm not sure whether, or not, "The Problem of the Vanishing Town" qualifies as an impossible crime story, because the plot only has a promise of an impossible situation. However, the explanation as to how the town of Northsouth eventually vanished, here played for laughs, could easily be used to explain the miraculous appearance of an entire town. So I decided to tag this post as a "locked room mystery" and "impossible crime," if only for being a parody of the Dr. Hawthorne series.

Since this is purely parody, there not much else I can say about "The Problem of the Vanishing Town," in terms of plotting or characterization, except that it's a fun, tongue-in-cheek treatment of one of Hoch's most popular and beloved series-characters. Crippen & Landru should have included it as a bonus story in Challenge the Impossible. Just like William Brittain's "The Men Who Read Isaac Asimov" in the posthumously published The Return of the Black Widowers (2005). So, long story short, "The Problem of the Vanishing Town" is unreservedly recommended to fans of Hoch and Dr. Hawthorne.

A note for the curious: one of the impossible murders Dr. Shoehorn casually described at the start of the story is the death of a clown, who was "mauled by a lion on the fifth floor of the Northsouth Hotel" when "the lion was in his cage five blocks away" – which was deemed "kind of interesting" by Dr. Shoehorn. Hoch picked up the challenge and turned this idea into a short story, entitled "Circus in the Sky," which was published in Scenes of Crime (2000). So I'll see if I can track down that story for one of my next short story reviews.

Next up on this blog is a review of a very obscure mystery novels from the 1930s that was reprinted last year.
Geplaatst door TomCat on 3/18/2019