Edward D. Hoch had a storied, decades-long career as a voluminous writer of short stories and passed away, in 2008, with close to a thousand short stories to his name, but he was equally productive when it came to creating series-characters – somewhere around twenty of them. Some where better known or had longer lifespans than others.

I've previously discussed short stories collections starring some of Hoch's most celebrated series-detectives, such as The Thefts of Nick Velvet (1971), The Ripper of Storyville (1997) and Challenge the Impossible (2018), but there's an entire roster of lesser-known, secondary series-characters whose stories have remained uncollected to this very day. A roster comprising of characters such as Father David Noone, Ulysses S. Bird, Sir Gideon Parrot and Paul Tower. Most of them only appeared in a handful of stories. 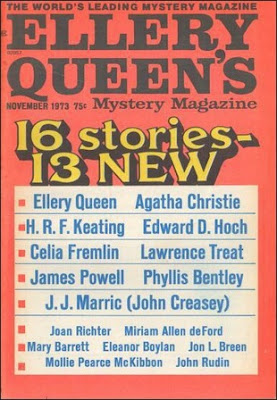 I've yet to encounter any of these characters, but plan to track down a couple of these uncollected stories from some of Hoch's short-lived, unsung series and found an excellent locked room mystery from the slightly more successful Interpol-series – counting fourteen stories that were published between 1973 and 1984 in Ellery Queen's Mystery Magazine. The protagonists of this series are Sebastian Blue, "a middle-aged Englishman formerly of Scotland Yard," who now works for Interpol and has been paired with a promising talent from the translation department, Laura Charme, to investigate "airline crimes around the globe." They operate from an office on the top floor of the Interpol headquarters in Saint-Cloud, Paris, France.

The third story in the series, "The Case of the Modern Medusa," was originally published in the November, 1973, issue of EQMM and brings the two Interpol agents to Geneva, Switzerland.

Two years ago, Otto Dolliman opened a Mythology Fair in Geneva and it appears to be merely a tourist attraction, but Interpol has reasons to believe the Mythology Fair is a cover for "a gold-smuggling operation" linked to the world-wide narcotic trade. A suspicion strengthened when Gretchen Spengler, a West German airline stewardess, was murdered shortly after "the live-action tableaux" of Perseus slaying Medusa. Gretchen Spengled worked at the Fair during her spare time and Interpol believes she used her position, as a stewardess, to smuggle cold out of Switzerland. So they send down Charme to take Spengler's place, as Medusa, but a few days later, the murderer strikes a second time and this murder is an impossible crime – except that "the room wasn't really locked."

Otto Dolliman has a small office-room dominated by an eight-foot-tall statue of King Neptune, holding a very real and sharp trident, which was driven by the murderer into Dolliman's stomach. There are only two problems: the only window in the office was covered with a wire-mesh grille, firmly bolted in place, while the only (unlocked) door had been under constant observation by Sebastian Blue!

A great locked room situation with an excellent and original explanation, easily one of Hoch's better impossible crime stories, but as good as the locked room-trick is a cheeky clue that doubled as a red herring by diverting your attention away from the truth. A splendid locked room-trick that perhaps would have better at home in the Dr. Sam Hawthorne series, where it would have been more appreciated, but "The Case of the Modern Medusa" predates the first Dr. Hawthorne story, "The Problem of the Covered Bridge," by more than a year – published in the December, 1974, issue of EQMM. So, purely as an impossible crime story, this one comes highly recommended to every locked room reader.

The pool of suspects is practically bone dry and the murderer is pretty much the only person standing in it, but, since this is a how-was-it-done, not a whodunit, this is of no consequence. A well-hidden murderer would have certainly rocketed this story to the status of a modern classic, but I'm more than happy with what I got. And then there are the two detectives.

Admittedly, Sebastian Blue and Laura Charme aren't exactly three-dimensional characters, who appear to lean on the gimmick of being police-detectives without borders, but they pleasantly reminded me of Robbie Corbijn and Lowina de Jong – creations of Dutch mystery writer "Anne van Doorn." A somewhat older, former policeman who mentors a younger woman and they're occasionally confronted with an impossible crime.

All in all, "The Case of the Modern Medusa" has a cleverly constructed locked room problem and would like to see more of Blue and Charme. So I'll definitely be returning to this series and, predicatively, I'm already eyeballing "The Case of the Musical Bullet" (1974).
Geplaatst door TomCat on 3/23/2019