Detective Conan: Who's the Boss?

Some weeks ago, I discussed Tetsuya Ayukawa's The Red Locked Room (2020) and ended the review with the promise to post my fan theory regarding the secret identity of the leader of the Black Organization, which is the red-thread running through the main storyline of Gosho Aoyama's Case Closed – published outside of the English-speaking world as Detective Conan. Mild spoilers ahead! 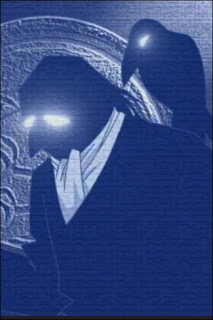 I'm currently at vol. 73 and wanted to bridge the gap with vol. 74 by rereading and reviewing the landmark story, The Sunset Manor Case, from vol. 30. A story that takes place in palatial, Western-style manor house where six detectives have gathered to solve a decades old mystery and getting murdered. I'm not far enough in the series to officially know that the elusive boss made an appearance, of sorts, in that story, but bits and pieces have been spoiled to me over the years. And when going through the story, it suddenly occurred to me who the boss could be. A character who shrewdly cloaked himself in someone else's feathers, but not in the way long-time readers of the series might assume.

First, I've to get those annoying, but necessary, spoilers out of the way. Continue to read at your own risk. The reader has been warned!

On December 13, 2017, Gosho Aoyama revealed that the boss is, or was, the multi-millionaire who owned Sunset Manor, Renya Karasuma, who "died half a century ago under mysterious circumstances" and, if he's still alive, he would be over a 140-years-old – suggesting he was the first one to rejuvenate. And assumed a new identity. Just like Jimmy/Conan in vol. 1. Very likely, he has appeared more prominently under that identity and has interacted with Conan. I think it's not unreasonable to assume that this identity had already been decided on when the series started with the idea existing some time before the first chapter was published.

So, if you take a look at the earliest characters Aoyama created, one character stands out as a possible candidate to be revealed as the rejuvenated boss. A character who did not originate in Detective Conan and would not appear in the series until that important story in vol. 30. I'm talking about the great teenage detective and arch rival of Kaito KID, Saguru Hakuba! Admittedly, I've only so-called "psychological clues" and a bit of educated guesswork to give as evidence, but they make sense to me. You can decide for yourself.

Renya Karasuma is depicted in vol. 30. as an ominous silhouette with a pet crow perched on his left shoulder and, considering how he has clung to life, the passage of time is likely to great concern to him. Hakuba is hyper-conscience of the flow of time and can note time down to the millisecond, which is quite a developed sense of time for a 17-year-old. Something you would expect from a much older man whose "mind time" quickened its pace as he started to grow older. Since it's very possible Renya rejuvenated more than once, his "mind time" could have developed to the point where he's not only aware of the minutes and seconds ticking away, but the milliseconds as well – making it all the more interesting they appeared in vol. 30. A story in which clocks and outward appearances were integral to revealing the secret of Sunset Manor. You could read it as a metaphorical clue that someone more brighter and appealing was hidden behind that dark silhouette. This leads me to what is perhaps the most tangible clue.

Aoyama is very fond of parallel, or mirrored, characterization that he primarily reserves for his main and recurring characters. Jimmy/Conan and Kaitou KID are the most obvious example of this. But if you accept Hakuba and Renya are one and the same person, you can see this mirror approach to characterization all over their double identities.

I believe the most blatant clue is Renya's depiction, in vol. 30, as a dark silhouette with a black crow on his shoulder and Hakuba debuted in that same story carrying his pet hawk, Watson. Crows and hawks are natural enemies! Renya and Hakuba also mirror each other outwardly, an old, Moriarty-like master criminal and a young, Sherlock Holmes-inspired detective, but apparently, Renya tends to overthink his schemes – which makes him prone to mistakes. If my idea is correct, you can see this mistake reflected in his disguise.

A disguise that was put on a little too thick when he debuted, in Magic Kaitou, wearing a cape and deerstalker, which he later ditched, but could indicate Aoyama had already decided to make him the boss in Detective Conan. Renya is based on Professor Moriarty. So why not make him pose like a young detective who used to dress up like Sherlock Holmes who has the Japanese Arsène Lupin as his nemesis, which also gives him a double-layered motive to hunt down the KID. Firstly, KID is the kind of character who could become a potential threat to his organization and, one way or another, has to be eliminated. Secondly, a long-standing rivalry with a master criminal cements his position as one of the good guys. Thirdly, it would be a masterstroke to hide your main villain in another series and only have him appear in the main series as a novelty, crossover character to make some of the bigger stories even more special. It would be one of the greatest play on the least-likely-suspect!

There is, however, a weakness in my theory: Hakuba has two known relatives, a father and uncle, who can only be explained as members of the organization posing as relatives and help prop up his false identity. I know this is stretching things, but remember Renya has the resources and time to create such an elaborate identity that he could (literally) grow into over the years. And the relatives hold positions in society that can be very handy to a criminal organization. Hakuba father is the Superintendent General of the Tokyo Metropolitan Police Department and his uncle is the owner of a research laboratory, which is another aspect that could be tied to the main storyline of Detective Conan.

When you take all of this together, there's one more thing that stands out as a potential clue. As previously mentioned, Hakuba made his first appearance, in Detective Conan, in the Sunset Manor Case and remarked that, "after 40 years," he was "finally able to step inside the scene of the tragedy" he had "long heard of only in frightened whispers" – not that he had never been inside before. And that the decades-old tragedy was hardly his "first reason for coming." In the story, his reason for being there is Kaitou KID, but if Hakuba is Renya, his remarks meant something very differently.

So what do you make of my theory? Do you think its close to the truth or just another internet fan theory that will turn out to be completely wrong? This is one post I would very much like some feedback on.

If this post happens to attract Detective Conan readers, I reviewed volumes 38-73 under the Gosho Aoyama tag. I also discussed two brilliantly original impossible crime episodes, The Case of the Seance Double Locked Room and The Cursed Mask Laughs Coldly, and compiled a list with my favorite locked room mysteries from the manga series. Occasionally, I dip into The Kindaichi Case Files or Q.E.D., but the primary focus of the blog is on classic, or neo-classical, detective stories and novels. That where I'll return to with my next post. So stay tuned.
Geplaatst door TomCat on 6/10/2020