For the past two years, I've been reading a lot of single short stories covering a 100-year period, ranging from the anonymously published "The Grosvenor Square Mystery" (1909) to Anne van Doorn's "Het huis dat ongeluk bracht" ("The House That Brought Bad Luck," 2018), but noticed my last short story review was posted in March – discussing Mike Wiecek's techno-thriller "The End of the Train" (2007). So it was time to return to the short story and decided on a pair of locked room mysteries written by the master of the short detective story, Edward D. Hoch. 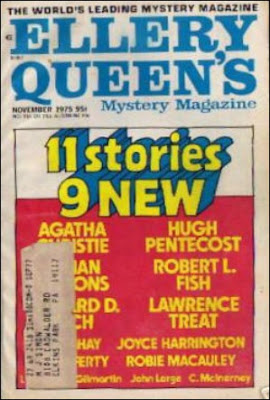 Over a career that spanned half a century, Hoch wrote close to a thousand short stories and created a whole host of popular detectives-characters. Some more well-known than others.

Nick Velvet was created in 1966 as, to use Hoch's own words, an answer to Ian Fleming's James Bond. A modern, sophisticated thief specialized in "unlikely thefts of valueless objects," but, like many fictional thieves before him, Velvet often had to play detective in order "to accomplish his mission, free himself from a frame-up or collect his fee" – which is easier said than done. Particularly when the problem he has to solve is of the impossible variety.

"The Theft of the Venetian Window" was originally published in the November, 1975, issue of Ellery Queen's Mystery Magazine and Velvet is engaged by Milo Mason to go to Venice, Italy, to steal a mirror that he considers to be "the most valuable object on the face of the earth." Mason assures Velvet that the value of the mirror is not monetary, but spiritual, because the mirror is a window, or doorway, to an alternative universe and claims "the mirror might have inspired Lewis Carroll." So he accepts the assignment and goes to Venice to meet with the owner of the mirror, Giorgio Lambazi, but then everything goes horribly wrong.

During their conversation, Velvet drops sleeping pills into Lambazi's espresso, but, before the drug took effect, Lambazi asks him to leave and he has to wait outside the door until the old man goes to sleep. After fifteen minutes, Velvet begins to skillfully pick the lock and unscrewing the chain-link bolt, but, upon reentering the apartment, he finds Lambazi apparently peacefully slumbering in his chair before the mirror – except that his throat had been neatly cut! Lambazi had been alone in the apartment. The only door was locked and bolted with Velvet standing outside it all the time and the only window, overlooking the canal, was "shuttered and bolted on the inside." So how did the killer get in and out?

Surprisingly, considering the premise of the story, "The Theft of Venetian Window" worked better as whodunit than as an impossible crime story, because the locked room-trick is disappointingly simplistic. Easily one of Hoch's most basic and simplest locked room-tricks, which is disappointing coming on the heels of an intriguingly posed impossibility. Nevertheless, Velvet still has to earn his $20,000 fee and how he collects it makes it a worthwhile read, but certainly not one of Hoch's classic short stories.

If you want a second opinion on this story, I recommend you read Christian Henriksson's "Stray Impossibilities – Part Hoch," posted on Mysteries, Short and Sweet, who praised the solution to the locked room murder as "excellent in all its simplicity." 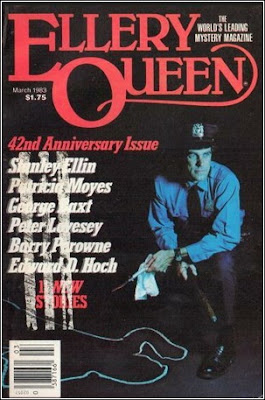 One morning, Douglas Shelton passes his study to the kitchen to make his breakfast, glancing inside to see if everything was already, but, as he was squeezing oranges, he gets a phone call asking him to take a look at his study. The study was completely empty. In the few minutes Shelton had been preparing breakfast, someone had managed to remove all the furniture, but this was not the last escapade of the White Queen. The next day a roulette wheel from an unused gaming table at the Golden Fleece casino vanished with the place full of people!

Velvet decides to confront Sandra Paris about cutting into his business, but learns Rooster hasn't paid her fee yet, because there was supposed to be papers hidden, somewhere, in the stolen furniture. So she offers him his usual fee to find the papers in the stolen furniture that she had already "reduced to rubble in a futile attempt to find the papers," which makes for a good, Ellery Queen-like hidden object puzzle with a double-layered solution. Velvet also to figure out how every stick of furniture was taken out of the study within a couple of minutes and how the roulette wheel vanished from the middle of a crowded casino, but Velvet also has reputation to protect and makes a bet with the White Queen that he can steal her menu at breakfast some morning – she promises to pay him twenty-five thousand dollars if he succeeds. And he earns his money by making the menu miraculously disappear from her hands. Hoch showed why he was master of the short story with the casual revelation of the solution to this third and final impossible disappearance.

My only objection is that Paris should have immediately figured out how the menu disappeared, but, in every other regard, "The Theft of the White Queen's Menu" is a splendid and richly plotted caper with no less than three miraculous disappearances. Somewhat reminiscent of Norman Berrow's caper The Three Tiers of Fantasy (1947) with the solution to disappearance of the furniture being the absolute highlight of the plot. The problem of the stolen roulette wheel and menu were very minor in comparison, but certainly added to the charm of the story about two master thieves locking horns. Definitely recommended!
Geplaatst door TomCat on 6/06/2020