The Case of the Flowery Corpse (1956) by Christopher Bush

The Case of the Flowery Corpse (1956) is the 49th Ludovic Travers novel by Christopher Bush, now "an Elder Statesman of Murder," while Travers has completed his transition from an amateur detective to a genteel private investigator with a controlling interest in the Broad Street Detective Agency, but this late novel hearkens back to the quiet, rural village mysteries of previous decades – rife with blackmail, gossip and murder. Something very different from the post-war malaise or the seedier murders found in The Case of the Fourth Detective (1951) and The Case of the Amateur Actor (1955). 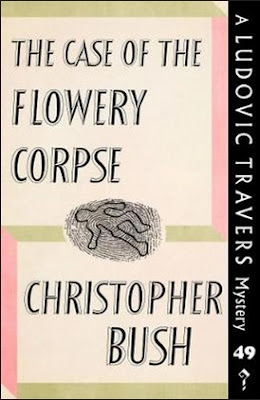 The Case of the Flowery Corpse begins with Travers driving down to roads of rural Suffolk, where he was born, to spend a belated holiday with an old college friend, Sir Henry Morle, who bought a little place in the village of Marstead. When he was close to being lost, Travers was overtaken on the road by a reckless driver who must have been either "drunk or mad." So he was not surprised to find the car ahead of him "piled up against a scrub oak in the hedge" with its front in shambles and the driver without a heartbeat.

An unfortunate, if unsurprising, roadside accident without an apparent hint of foul play, but a closer examination and a strange coincidence turns Travers' vacation into a busman's holiday.

Norman Ranger is the name of the dead driver, "virtually the stage type of Irishman," who deliberately set out to to ingratiate himself with the villagers, but, once accepted, suddenly changed his behavior and "had made himself objectionable to practically everybody" – while never divulging a single thing about his past or the source of his income. Curiously, on the night he got killed, someone tried to burglarize his home and that's quite a rare crime in the peaceful village. What are the chances the burglary and the car crash happened on the same night? And to make it even more suspicious, the doctor send the organs to the county analyst to be tested for poisons. So they're either looking at a bizarre accident littered with coincidences and mysteries or deliberate murder.

Sir Henry is elated at the possibility of a crime and getting to see the "unofficial expert" of Scotland Yard tackling their little domestic murder, but the Chief Constable quickly decided to call in the Yard. Sadly, the case is too unimportant for Superintendent George Wharton to handle. This is where The Case of the Flowery Corpse begins to differ quite a bit from the early and later novels in the series that I have read.

So my favorite Scotland Yard detective is replaced with the quiet, competent and keen-eyed Chief-Inspector Jewle. Where Wharton "would have raised hands of despair and upbraiding to high heaven," Jewle "would shrug his shoulders and carry on," but I can understand why Bush sidelined Wharton here – because the plot required a more plodding detective. There are no alibis that need destroying and even the identity of the murderer is not central to the plot, but peeling away the layers of mysteries surrounding the victim's identity and his past, which eventually exposes a link between him and his murderer. Interestingly, the plot is propelled by a surprising amount of forensic detective work carried out in the background of the story.

I've already mentioned the chemical analyses, but an examination of the second victim's clothes, found covered in straw, reveals he had come in very close contact with chrysanthemums and microscopic fibers inextricably linked the two deaths together. Casts are made of footprints and tire marks found at the crime scenes. Travers asks the police to get him a picture of Ranger with the hair lightened up. So that people who knew him with lighter hair can easier recognize him. An early example of (forensic) photoshopping.

So the structure and feeling of The Case of the Flowery Corpse differs quite a bit from the novels Bush wrote during the 1930s and 1940s. It actually felt like a J.J. Connington or Freeman Wills Crofts novel from the 1920s with the same quiet, unassuming competence of the British detective story from that period. Bush was 70-years-old when The Case of the Flowery Corpse was published and you have to wonder if he was feeling a little nostalgic, but the ending was a reminder he had taken the series in a new direction. And the ending finally gave Travers the full detective experience! So, yeah, another welcome, long overdue reprint from the wonderful Dean Street Press.
Geplaatst door TomCat on 6/08/2020