If Agatha Christie was the British Queen of Crime, then Helen McCloy was the First Lady of the American detective story. A first-class mystery writer whose cunningly plotted, subtly clued and excellently characterized detective novels can only be compared to the works of Christianna Brand and John Dickson Carr, who all three wrote more than one celebrated locked room mystery, but McCloy differed in two ways from them – an interest in Fruedian psychology and suspense fiction. This lead her to write some unusual detective novels that were a little off the beaten track. 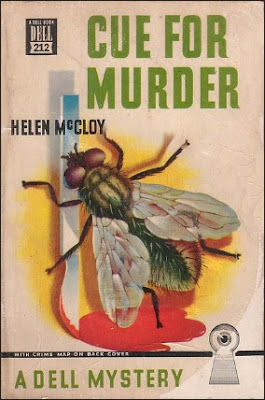 McCloy's Through a Glass, Darkly (1950) is arguably the detective story's most well-known treatment of the doppelgänger phenomena and she decided to develop a taste for the traditional locked room puzzle during a period when the light of the Golden Age had dimmed considerably. Such as blending espionage and suspense with a locked room problem (The Further Side of Fear, 1967) or penning one of the best rooms-that-kill stories (Mr. Splitfoot, 1968), which is as good as anything written by Carr.

So, in comparison, I always assumed Cue for Murder (1942) was one of McCloy's more conventional novels with a theatrical murder committed in full view of the audience, but, now that I've read it, I can only describe it as a demonstration of her abilities as a plotter – devilish complex in its simplicity. McCloy felt confident enough to give her readers the most important clues up front. What a woman!

The prologue states that the Royal Theatre was "solved through the agency of a house fly and a canary." The fly discovered "the chemical evidence that so impressed the jury at the trial," but "the canary provided a psychological clue to the murderer's identity" before "the murder was committed."

Cue for Murder begins with Dr. Basil Willing, medical assistant to the District Attorney, specializing in psychiatry, reading a "pleasantly trivial" newspaper column reporting a puzzling burglary at Marcus Lazarus' knife-grinding shop. The shop is little more than a shack, tucked away in an alley, which contained nothing worth stealing, but the intruder had opened "the cage of Lazarus' pet canary and set the bird free." A petty little problem that teased Dr. Willing's imagination "as prettily as a problem in chess or mathematics," but he would grasp the importance of the freed canary until he attends the opening of a revival play of Victorien Sardou's 1882 Fedora – because the shop in the alley leads to the stage door of the Royalty Theatre. The curtain was raised on murder long before the actors climbed on stage!

During the first act, there are four actors on stage. The leading lady and star of Sam Milhau's theatrical company, Wanda Morley. A young and upcoming actor, Rodney Tait, who's been seen a lot in public with Wanda and an engagement is rumored, but all the time he had been engaged to the costume designer, Pauline. Leonard is the more experienced and talented actor of the group who recently returned to the New York stage after a year's illness. Finally, there's the unknown man who plays the quiet, undemanding role of the mortally wounded Count Vladimir. A character who lies quietly in alcove on stage without uttering a single line, but at the end of the first act, he's discovered with "the grooved handle of a surgical knife" protruding from his chest.

This discovery presents Dr. Willing and Assistant Chief Inspector Foyle with a diabolically planned and executed murder, committed within the forty-eight minutes of the first act, by one of those three actors on stage – all of whom had opportunities and no alibis. Dr. Willing notes that, as a rule, murderers try to disassociate them from the murderer with a false alibi, but this murderer realized there is safety in numbers and "obliterated the alibi of two other people." So the murderer "dissipated suspicion by diffusing it equally among three people." 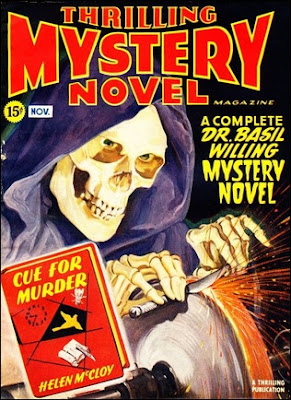 A situation very reminiscent of Christie's Cards on the Table (1936) in which a man is stabbed while the only four suspects were playing bridge and the deceiving simplicity of the situation is what made it one of Christie's trickiest whodunits. The reason why the clues and psychology of the suspects are so important in Cards on the Table and Cue for Murder. Regrettably, there's a tiny weakness to the clueing and psychology of the suspects that prevented the story from being an undisputed classic.

The clues are mostly excellent. I already mentioned the clue of canary, but there's also the curious behavior of the fly that kept "banking and diving like a miniature plane" around the knife-handle. But never landing on the bloodstained blade. There's manuscript with a seemingly unimportant, but ominous, line underscored and the best clue is perhaps the title of the book. However, the problem is that the clues, physical and psychological, can fit any of the suspects without showing why the two other suspects couldn't have committed the murder – even the titular clue is hardly cast-iron evidence. Because they have no way of telling when exactly the fatal knife blow was delivered. A lawyer would have torn that piece of evidence to shreds in court.

Another problem is that everyone appeared to have an association, or fondness, for canaries, which showed the influence of Freudian psycho-analyses had on McCloy ("no human being can ever perform any act without a motive"), but it severely weakened that clue. And it hampered the fair play aspect of the story. A story that would have otherwise been as close to perfection as you could wish a detective story to be.

Regardless of my technical nitpicking, you should not feel discouraged and drop the book to the bottom of your to-be-read pile. Cue for Murder is not one of McCloy's greatest triumphs, but it's unquestionably one of the better and most original theatrical mystery novels from the genre's Golden Age. McCloy brilliantly used the psychology of actors and the closed environment of the stage, "the frontier between reality and illusion," to create a truly baffling murder mystery. Only thing it lacked was a process of elimination clearly demonstrating why the other suspects couldn't have committed the murder, which would have strengthened instead of weakened those crafty clues. But, in the end, Cue for Murder is a near-classic that can still be admired and enjoyed for the all things it did right rather than leaving the reader annoyed at its few mistakes. I definitely enjoyed it. Recommended, with reservations.

A note for the curious: the prologue mentioned how the chemical evidence impressed the jury at the trial, but the murderer took the easy way out in the last chapter. So there was no trial! McCloy was a little sloppy here when it came to the finer details of her storytelling and plotting.
Geplaatst door TomCat on 6/22/2020