If you're a regular reader of this blog, you may have noticed my affection for the Japanese detective story and have read some twenty novels, several short story collections and countless episodes and volumes of anime-and manga detective series over the years – nearly all of them translated in the past few decades. Since 2000, the number of translations gradually changed from a slow, barely existent drip to a steady stream with Locked Room International, Pushkin Vertigo and Bento Books regularly adding new titles to the English catalog. Keigo Higashino even became an international bestseller with the translations being deemed good enough to brandish the label "a novel" on their front covers. 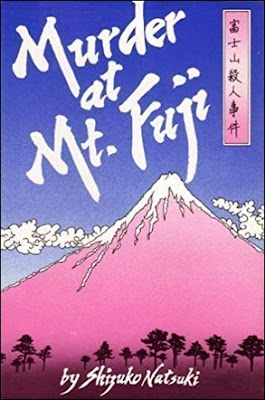 For today's review, I picked a much older translation that, regrettably, betrayed the Japanese detective novel wasn't held in the same regard thirty-five years ago.

Shizuko Natsuki was an incredibly productive mystery novelist, writing more than eighty novels and short stories collections, whose detective stories formed the basis for roughly forty movies and six of her novels were translated into English – published between 1984 and 1991. One of Natsuki's most well-known novels is arguably W no Higeki (The Tragedy of W, 1982), translated in '84 as Murder at Mt. Fuji, but the translator, Robert B. Rohmer, took some liberties to make the story more palatable for Western readers.

Ho-Ling Wong noted in his 2012 review that he had no idea why one of the main characters, Jane Prescott, had to be "a double outsider" (a foreign friend of the family) for the story to work, because she's changed to a Japanese women in screen adaptations. An anonymous comment pointed out that the translator had replaced the character from the original with Jane Prescott to give Western readers "an American heroine among all the exotic creatures." Regrettably, this character change is noticeable and unnatural enough to give Murder at Mt. Fuji a sense of inauthenticity. Ho-Ling blamed the title change from the Ellery Queen-inspired The Tragedy of W to the nondescript, uninspired Murder at Mt. Fuji on Orientalism and a lack of interest, or knowledge, of Golden Age detective stories, but it probably was a marketing decision to make the book standout as something different – as it introduced Natsuki to an English-reading audience. But the title certainly oversold the story's background scenery just a little bit. Mt. Fuji is referred to only a handful of times throughout the story.

Yet, in spite of these changes, Murder at Mt. Fuji treats the reader to an unusual inverted detective story that stands much closer to Anthony Berkeley than Ellery Queen. Natsuki is billed as the Agatha Christie of Japan, but her Western debut was pure Berkeley with an altruistic conspiracy and a twisted ending. Although some would probably argue the plot is an inversion of a very famous Christie novel.

Jane Prescott is an American exchange student from the University of Oregon, who specializes in modern Japanese literature at Japan Women's University, but she had to take a part-time job tutoring Chiyo Wada, in conversational English, to cover her living expenses. Chiyo is the grandniece of the family patriarch and president of Wada Pharmaceuticals, Yohei Wada. A tradition of the Wada family is to get together for the New Year's holiday at one of their villas, where the entire clan would spend a few quiet days in seclusion, but this year, Jane had to be invited to help Chiyo prepare for her graduation thesis. Jane travels to their summer villa on the shores of Lake Yamanaka, Mt. Fuji "soaring majestically" in the background, but she's warned by one of Chiyo's relatives that all the men of the Wada family have "a reputation for womanizing." A lecherous trait that "even the men who marry into the family develop." This serves as a prelude to a deadly domestic drama. 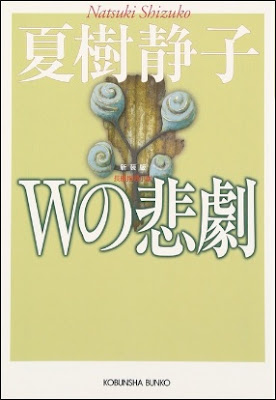 That evening, the peace is shattered by a distraught cry, "my god, Chiyo! Why did you do it? Why?" Chiyo had attempted to slash her wrists after stabbing and killing her great-uncle.

Chiyo tells them Yohei had asked her to come to his room later that night, where he tried to rape her, but she defended herself with a fruit knife and, since Chiyo is "the one person everyone loved," they decide to make "every effort to conceal her crime from the police" – voluntarily putting their necks in the noose by tampering with the evidence and concocting an incontestable alibi. Chiyo is send back to Tokyo with the excuse that she had forgotten an essential reference book while the family stage a burglary, but also make it appear as if Yohei was still alive when she left. One of their tricks involves a late-night delivery meal and a stomach pump. Japanese mystery writers really like to play with corpses, don't they? I'll never stop being amazed how easily they wring cast-iron alibis or baffling impossible crimes from a body!

So the first quarter of the story details the conspiracy, showing the reader every step they take, before the faked burglary and murder is reported to the local police, but the amateur conspirators turned out to be no match for the experienced, well-oiled police apparatus. The competent Detective Ukyo Nakazato and mediagenic Superintendent Katsubei Aiura need less than a day to gather enough evidence to prove the murder was an inside job. However, they might have had some help from someone within the Wada family. A mole who wanted to see Chiyo arrested and sabotaged the conspiracy.

On a side note, there's hole in the conspiracy nobody noticed, not the conspirators or the police, which concerns the playing-and score cards. The family wanted to make it appear that Yohei had been playing poker with them, after Chiyo left, but had the cards been dusted for fingerprints the whole scheme would have collapsed, because Yohei's prints would not have been on them.

Just as an inverted mystery novel, Murder at Mt. Fuji has something completely different and fresh to offer, but have to agree with Ho-Ling that the story feels a little light and rushed in parts. Even with the assistance of the Wada mole, the police very easily pulverized an incredibly elaborate plot and cut through the web of lies. A little too easily and a little too fast. This is what makes the story feel lighter, and lighter, with each passing chapter that followed the setup, which is unquestionable the best portion of the book, but the ending gives the reader a glimmer why Natsuki picked an EQ inspired book title – a title that makes sense when you imagine the case from the point-of-view of the police. Everything else screamed Berkeley.

The tragedy of Murder at Mt. Fuji is that it has since been overshadowed by better translations of better novels by some of the grandmasters, past and present, of the Japanese detective story and the translator tinkering with one of the characters certainly didn't do it any favors. It tainted the atmosphere of Murder at Mt. Fuji and this makes it difficult to recommend to anyone who has enjoyed the novels and short stories by Takemaru Abiko, Yukito Ayatsuji, Keikichi Osaka, Soji Shimada and Seishi Yokomizo. But if you enjoy inverted mysteries, Murder at Mt. Fuji comes highly recommended.
Geplaatst door TomCat on 6/12/2020